The future of the WAC: Analysis of Karl Benson's comments on expansion and BSU

Share All sharing options for: The future of the WAC: Analysis of Karl Benson's comments on expansion and BSU

WAC commissioner Karl Benson shared with Graham Watson his thoughts on his beloved conference in an interview that was at times revealing, abrupt, and guarded. He's like the Gary Bettman of NCAA conference commissioners.

Where is the WAC headed? Is expansion an option? How does Boise State fit into the conference's future plans? Join me after the jump for a spin around Karl Benson's comments share your thoughts about the WAC's future. 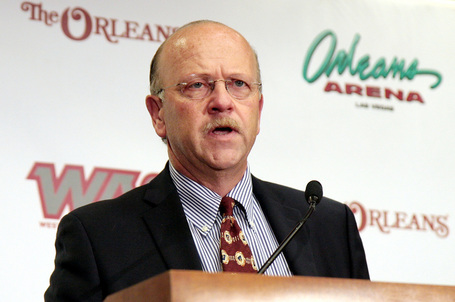 Collar buttons. They never go out of style. (via vbablogger.files.wordpress.com)

An interview with Karl Benson

Many thanks to ESPN's Graham Watson for her interview with Benson and to reader givemesomemoore for posting the piece to the FanShots. Let's break down Benson's comments. Shall we?

The question: Have you guys looked at expanding your conference at all?

The answer: "... if I had my druthers, I would rather work with a 10-team league than a nine-team league."

The analysis: Someone give Karl Benson his druthers!

The WAC is a 9-team league as it stands today - or an 8.5-team league depending on how you classify San Jose State. If Benson were to get his wish, we would be talking about WAC expansion. So let's humor him.

Where might the WAC look? In the past, rumors have swirled about the possible additions of Big Sky schools from Division I-AA, rumors that Benson did not dispel when he referenced the Big Sky-to-WAC pipeline in his Graham Watson interview. If you look to the Big Sky, you need look no further than Montana. And if Montana is not your cup of tea, then maybe Montana State, Idaho State, Portland State, or Central Washington. Anyone I'm forgetting?

However, as simple as adding a Big Sky/FCS team might be, there is that pesky problem with the NCAA placing a moratorium on teams changing classifications through August 2011. So what current Division I-A schools might Karl Benson have eyes for? Here's a list:

Assuming the Broncos stay in the WAC and the conference expands by one, which school would you like to see join the WAC?

The question: How do you prepare for (the possibility of Boise State leaving the WAC) and do you have to have pieces in place that can move if Boise State decides to leave?

The analysis: Benson seems to really like the idea of a Big Sky school joining the WAC. If college football conferences still exist in 2 years in any way similar to how they exist now, I would not be surprised at all if the WAC goes after Montana.

The answer: "Or do the Mountain West teams become the next choices for the WAC?"

The analysis: Graham Watson got served. 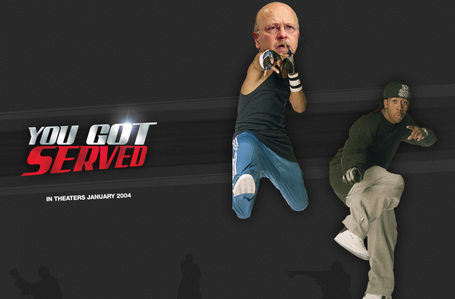 The question: How much have you been in contact with Boise State in terms of (their future plans)?

The answer: "... I would hope that if and when an invitation (to Boise State) comes that there would be an evaluation made that’s in the best interest of the university, and there would be recognition that the WAC has provided Boise State very well."

The analysis: Benson obviously feels like he has treated the Broncos very well during their WAC tenure. And in a lot of ways, he's right. The WAC has one of the best non-BCS television contracts, it has gone to bat for the Broncos to set up desirable bowl scenarios, and hires PR firms to help make the conference look better. What more could Benson do?

Boise State is certain to consider all of these factors in any decision to relocate. But in many ways, going from the WAC to another conference is not so much a matter of picking favorites as it is simply growing up. The Broncos have outgrown the WAC. And no amount of Friday night ESPN primetime games can change that.

The question: What is the next step for this conference to make it more attractive and give it that leg up?

The analysis: Without a doubt, this is the biggest problem plaguing the WAC as a football conference. Benson makes a good point later on in his answer that the MWC has risen to prominence because it has fielded three Top 25 teams in the past two seasons. The WAC has Boise State and then nobody.

When Benson says "more top 50 teams," he might as well be saying "the Broncos and really anyone else at all, I'm not picky." The WAC is as top-heavy as top-heavy can be. For example:

Oddly enough, Montana comes in at No. 57.

Should the WAC expand to 10 teams? What school would you like to see join the conference? Is competitiveness the WAC's biggest need? Share your thoughts in the comments.