The 2010 WAC Media Preview eases into Day Two today with coaching pressers from NMSU, SJSU, and LaTech, meaning that we'll have plenty of time and a lot more fun recapping and discussing the events of Day One.

Jason Robinson = unsuspended, at least after the first three games. Boise State = not unanimous favorites in the media poll. Robb Akey = dilweed. After the jump, I'll take a look back at the big stories from Day One, and keep a running tab on Day Two. Share your take on Day One's biggest news in the comments.

Highlights from Day Two pressers; actually, nope, those are lowlights

The WAC Emo Preview is in full swing today with two of the conference's worst teams and one that should probably be in the Sun Belt if we're being honest with ourselves. The press conference quotes, courtesy of the friends linked above, are therefore quite sad.

And last and probably least, San Jose State head coach Mike MacIntyre shocked all five reporters in attendance by proclaiming that the Spartans will have multiple two-way players this season, including RB/DB Brandon Rutley. I imagine this is more out of necessity than anything.

Jason Robinson leads the WAC in smugness. (via image.cdnl3.xosnetwork.com)

Jason Robinson is back! Clear a space behind Winston Venable and Hunter White.

The most talked about special teams contributor on the Boise State football team will be back, beginning with the New Mexico State game on October 2. Robinson will sit out games against Virginia Tech, Wyoming, and Oregon State thanks to his run-in with the law over the summer.

Venable has the nickelback position completely locked down and may even see more time than usual at the spot if Hunter White struggles in live game action. Venable and Robinson had a good partnership last year with Venable playing early downs and Robinson, a former safety, coming in to play the pass. Chances are, though, that Robinson's contributions to the team this fall will come on the special teams side. 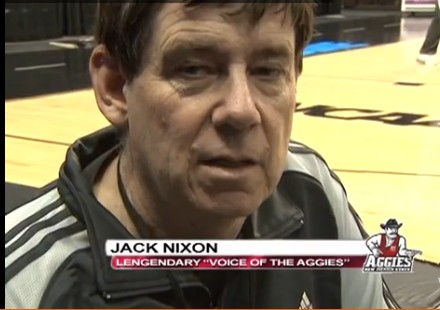 Nixon, the "voice of the Aggies" and now the "voice of the morons," picked the Nevada Wolf Pack as WAC champions this season, which was either the most presient preseason pick in world history or the stupidest thing anyone has done since green lighting the Kraft Fight Hunger Bowl.

Robb Akey would like the BSU-Idaho rivalry to continue, Coach Pete would like to know in what universe that is a good idea

Idaho head coach and Idaho Statesman nugget source Robb Akey held serve at the podium on Day One of the WACMP, and among the ridiculous things he said was this:

Why would we? I don't think our fans like to even go up there.

And that, ladies and gentlemen, is how rivalries continue.

Robb Akey is half right

Akey didn't stop at demanding the governor's time. He also went after the Broncos' move to the Mountain West.

I think they're just trying to get away from us. They saw the Vandals getting better. 'We better go to the Mountain West before they get too good.'

Yes, the Broncos are very much trying to get away from the Vandals ... because the Vandals suck wind. If Boise State wanted to go to the Mountain West before Idaho got too good, they would have at least until 2043.

Kellen Moore is preseason WAC offensive player of the year, water is wet

Moore and Nevada's Dontay Moch were named the WAC's offensive and defensive preseason POYs yesterday, a development that was entirely to be expected since both players won the regular season version of those awards last fall. The interesting thing would have been to see how the media voted and how close Bronco players like Ryan Winterswyk and Jeron Johnson were to overtaking Moch.

This just in: NMSU's Jack Nixon voted for Seth Smith and Ronnie Lott.

What did you make of Day One of the WAC's Media Preview? Think Jack Nixon needs to seek professional counseling? How will Jason Robinson factor into the team depth chart this season? Share your thoughts in the comments.