This originally started as a comment to Drew’s post, but because I’m a nerdy football history person, I went overboard and decided to turn this into a post.

It's no secret the offense is not doing so good. Boise has gone 26 consecutive games without gaining 500 yards of offense (last done November 16, 2019 against New Mexico). That's the longest streak for the team since at least 2000. The second longest streak was only 11 games, between 2016-2017. Even the offenses Robert Prince coordinated that we love to make fun of never went more than six games without gaining 500 yards.

Through three games, a quarter or the regular season, Boise is 91st in points (26 a game), and 107th in yards (318). What's really sad, and this might be nitpicky, but if you take away three plays (Green's run against Oregon State, and the two deep passes against New Mexico), Boise would drop to 126th in yards. Through three games, 18% of the total yards have come on those three plays. ESPN's fancy SP+ rankings have Boise's offense as 81st (explanation of how that works here). The offense is pretty much Holani, who is the team's leading receiver for receptions, yards, and touchdowns. Oh, and rushing yards too. But on the bright side, the defense is 20th by that SP+ metric

Before I go too far, I’m not going to get into what Boise should or shouldn’t do. At least not specifically, but the offensive issues aren't unique to Boise or new to college football. And yes, it’s okay to criticize sports teams. Their business is entertainment, and if it’s not entertaining they aren’t doing their job. I’m pretty sure a lot of people worked long and hard on "Morbius", but we’re still allowed to point out how bad that was.

One of the great things about football is it’s more of a chess match than people realize. Yes, having a 240 lb quarterback with track level speed and the ability to throw a football over them mountains is an advantage, but that doesn’t guarantee you’ll have a great offense. Pretty much every offense is based on a scheme or identity they they revert to. Lincoln Riley loves his run-pass options mixed with the Air Raid. Urban Meyer did well with spread-option plays. Even Chris Petersen, whose offenses were famous for not having an identity, still relied a lot on west coast passing schemes out of spread formations when they were looking for answers. All of them are more or less based on trying to hide issues on the offense. So, what can Boise try to do?

First, one of the most famous plays in NFL History is the Packers Sweep. Vince Lombardi was convinced it was the perfect play when done properly. It's based in power run schemes, which is starting to make a comeback after being phased out of some offenses. The basics can be applied to any formation regardless of scheme. The purpose is to create a numbers advantage. If the ball carrier is running to the left, why block the right side? It involves a pulling blocker, usually a guard, across the field to lead the runner.

It's a simple concept, but works regardless of offensive line talent. Coaches like to have their linemen be maulers who can beat any defender one-on-one, but you can't always get those players. Instead, you give yourself a numbers advantage on one side of the field. By the time the backside defender, usually a linebacker, is able to make a tackle, the runner is already 5-7 yards downfield. 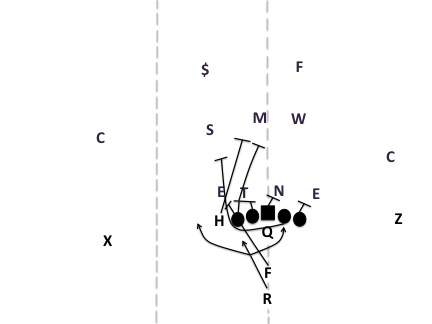 Arguably the most popular offense of all time is the west coast offense. Most of you equate this with Joe Montana and the 49rs, but Bill Walsh is on record saying it should have been the "Midwest" or "Cincinnati" offense, since he first developed it in Cincinnati in the early 70’s. The full story is interesting, but here’s a summary if you don't have the time:

It all started when Cincinnati drafted Greg Cook in 1969, who Bill Walsh believed had the most potential of any quarterback he coached (this includes Montana and Steve Young). The NFL offenses of the 60s were either trying to emulate Lombardi's Packers or the vertical passing game Al Davis had the Raiders running. Cincinnati, with Cook, was trying to copy the Raiders. It all went down the crapper when Cook tore his rotator cuff his rookie year.

The emergency quarterback Cincinnati traded for, Virgil Carter, didn’t have the arm strength to effectively run that vertical passing game, and Cincinnati was so invested in Greg Cook that they didn't have the personnel to rely on the run. So Walsh decided to get innovative. Instead of throwing the ball 50 yards every play, they would do short, quick passes that weren't difficult to make. The goal was to gain yards by running; passing the ball with route combinations would dictate where the exact yardage would be gained. The amount of "air yards", or yards downfield the ball goes in the air, would be low.

Bill Walsh described the basic philosophy as "When you gain four yards on the ground against a defense, they think you're kicking their butt. When you gain four yards in the passing game against a defense, they think they're kicking your butt. Four yards is four yards. I'll take it any way I can get it". Another reason why it worked was because every player was part of the receiving game. Their fullback, Tom Rathman, actually finished second on the team with 73 receptions in 1989, and Roger Craig became the first player to get 1,000 rushing and receiving yards in the same season in 1985.

We could get into more detail on the exact scheme and why it worked, but you all know the history. The system was perfected with Joe Montana, who won 4 Superbowls, and pretty much every NFL offense uses concepts from the West Coast offense. In fact, most offensive schemes today, whether in college or the NFL, can be traced back to the "Ohio" offense.

So enough about the NFL, what about college? Sticking with the 80s, a coach by the name of Hal Mumme at UTEP had a problem most small schools were facing: trying to compete against bigger, stronger teams. He ended up coaching high school after being fired and started to study a coach he'd lost to quit a bit: LaVell Edwards at BYU. BYU ran their own version of Walsh's offense, and Mumme decided to it a step further. He was going to create a pass happy offense that covered every inch of the field. No defense, no matter how fast, could defend it all. After two years he finally got a chance to deploy this new offense at the college level, at the powerhouse school of Iowa Wesleyan. With the help of a new coach he hired, Mike Leach, the Air Raid was born.

The offense was based on simple concepts, reads, and protection schemes. They didn't need anyone overly talented to make it work, just people who worked hard and paid attention 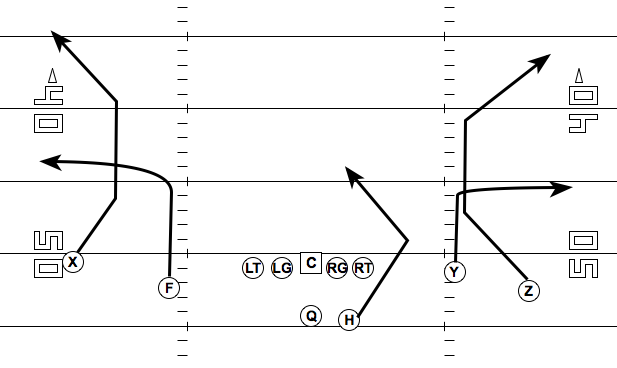 A lot of people viewed the Air raid as a gimmick that didn't bring success, just yards. A similair style, the spread offense, was based on the same concepts but had a greater emphasis on the run game. There are different claims on who gets credit for starting it, but the earliest I found was a coach in New Hampshire in the late 80's named Gary Crowton. He would create space for offenses to run through by utilizing formations and personnel groups, like lining up four receivers on one side of the field. The ultimate goal was to have the defense so focused on defending the sidelines that the defense would only leave five or six defenders in the box. The offense would take major advantage of the light defensive front through power-run concepts and mobile quarterbacks.

Crowton was good friends with Chip Kelly for a few decades, and when they finally had the chance to coach together at Oregon in 2005, Chip Kelly took his concepts to the next level. Oregon at the time could easily get fast players, but struggled with recruiting anyone in the trenches. Didn't matter: In addition to creating light defensive fronts, Oregon would wear them out by rarely waiting to snap the ball. Even if the defensive front could stop the run with six in the box, eventually they would tire out. Despite only having four offensive linemen drafted by the NFL from 2007-2012, Oregon consistently ranked in the top 10 for rushing yards.

David Yost, from that coaching tree, took this offense to Utah State in 2017. Utah State struggled offensively for years, averaging 23 points per game in 2016, ranked 107th nationally. By 2018 that average doubled to 47 a game, second only to Oklahoma. They had the same issues as Oregon with not getting great offensive linemen, but schemed their way through it. In 2018 Utah State allowed the fewest sacks per pass play in the country. They did that through effective, timely screens, and quick pass plays. It's hard to sack a quarterback when he never holds the ball for more than two seconds.

So what's the point in all this? Watching Boise, do you feel like there's an identity, or plan they have for scoring? UT Martin is an Air Raid offense. Even New Mexico has an offensive identity with their triple option. It's not good, but hey, we know what they're trying to do! Honestly, I don't know what Boise's trying. Last season they seemed to use a lot of RPOs, but so far each game this year they've had a different offense. Oregon State was a lot of Oregon-like spread option, mainly because Bachmeier was benched. Against New Mexico it was a lot of zone runs mixed with deep passing.

Against UT Martin, they started with a lot of play-action bootlegs, which worked in the first half; they scored on five of their six drives. The second half they very much went into "practice mode". With how well the defense was playing, they probably assumed the lead was safe. At that point I'm guessing the strategy was to not blow a lead and work on some other plays/concepts that would be useful going forward. But.... is that what we should expect to see? It's difficult to have an offense when it's just "hey, let's try this". You can't just chuck the ball and hope someone catches it. That's reserved for back yard football, and for when Calvin Johnson is on your team.

Hopefully some identity becomes obvious in the next few games. The good news is Boise doesn’t face a horribly difficult schedule, in terms of opposing defenses:

Also, the biggest threats to winning the Mountain West aren't doing so good. Air Force lost a below-average Wyoming over the weekend, 17-14. Fresno State and San Diego are both 1-2, though they have faced a somewhat harder schedule (three of those four losses were to Utah, USC, and Oregon State).
Going back to those overall SP+ rankings, Boise is currently 45th. BYU is the only remaining opponent ranked higher at 35, dropping after getting schmacked by Oregon (when there are two schools we don't like playing each other, who do we root for?). The three next highest ranked opponents are Air Force (51), Fresno (55), and San Diego (81). So if Boise can't be good, they can at least be better than the competition.