I tried searching 27 days in dog years, but they gave me human years. .0739726 years til gameday everyone, and 0.0 years until we talk about Shea Whiting! Boise State’s imperialistic quest to lure all the tall athletic receivers out of Texas has continued with Mr. Whiting. Whiting was named a Blue-Grey All-American as a senior in HS and accounted for over 1,100 yards and 12 TDs in his last two prep seasons. There have been some questions of his sanity as he [checks notes] willingly ran the 400 meter dash in his prep days, being a member of the second fastest team in the nation. Mr. Whiting correctly spurned offers from Cal, Arizona, Houston, and Indiana.

It’s all gas no brakes for the man of the day. 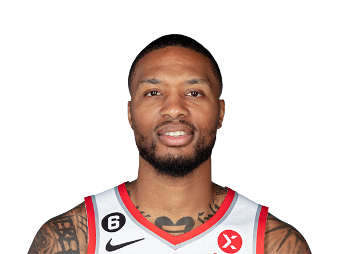 Damien Lillard with a mean mug anyone??

Fall 2020 Academic All-Mountain West. 2019 Mountain West Scholar-Athlete. Finalist for Houston TD Club Scholar-Athlete of the Year and Houston TD Club Athletic Award as a senior. First-team All-District 23-6A honoree as a senior. Named team offensive MVP as a senior. Named a Blue-Grey Football All-American after senior season. First-team All-District 23-6A as a junior as well as co-offensive MVP of Alief Taylor squad. Named first-team all-district as a returner as a sophomore. Appeared in 6 games in 2021, appearing primarily on special teams.

Significant shuffle in the WR has certainly left some space. While Shea isn’t the first name brought up in replacing Khalil Shakir, there are few “locks” on WR playing time. I wouldn’t be shocked to see him catching more passes and continuing his time on special teams as well.

He is @WhitingShea, but his tweets are a secret.

Shea picked #27 in honor of the former Bronco great Jeremy Avery, who gave Mr. Whiting his blessing to have a 1000 yard season this year.