Some websites choose to rank players arbitrarily by their “importance” to the team this upcoming season, but here at OBNUG, we still believe in science. So with 60 days till kickoff we present to you — #60 #10 Andrew Simpson Andrew initially took the wayward (Simp)son route and committed to Kansas, but then something changed. Maybe he just realized Kansas University is located in...Kansas...and decided to opt for a place with a little more geographic texture. Or maybe it was due to the (totally accurate) wrinkle that the linebackers coach responsible for recruiting him to Kansas, Chidera Uzo-Diribe, left for SMU. At any rate, Simpson came to the Broncos as a 3-star recruit with offers from Oregon, Central Michigan, Costal Carolina, and basically half the Mountain West. He also came with a senior year statline of 35 tackles, two forced fumbles, and three pass breakups. As a junior, when the Braves went 14-0 to be the No. 1 high school team in the country, he played some offense as well. He ended that season with 27 receptions for 290 yards and 2 touchdowns. Current Bronco, George Holani, and former Bronco commit, Katin Houser, were both teammates of Andrew at St. John Bosco.

No need to mess with Michael’s perfect nickname from last year.

If that’s a tad too esoteric for the non-90s kids among our readership, I’ll give you a hint: It’s a partial reference to a long-running tv show of some repute that shares a name with our featured player of today. 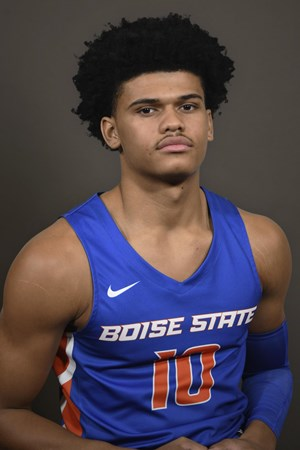 A slightly more jovial RayJ Dennis who busted the myth that once you are a Bronco you are always a Bronco.

Andrew redshirted his freshman year, so he has no highlights to present.

Simpson is part of a position group that we would love to see step up this season. Riley Whimpey has released his stranglehold on the weakside linebacker position after graduating, and tragically never getting an NIL deal with the Glad trash bag company. Theoretically this should open the position open to some competition, but it appears that Brandon Hawkins has been waiting in the wings to take over and the job should be his. Simpson will hopefully see the field and get some experience this year because Hawkins only has one year of eligibility remaining, so he will definitely be an important piece moving forward. For his 2022 prospectus I see him getting some snaps at WILL but possibly being a force on special teams as well.

I think we can safely say that is a “yes”.

In high school Andrew’s first job was as a Kool Aid Man impersonator, but he was quickly let go after not being able to nail the famous “OH, YEAH!” catchphrase, but instead always shouting “OUCH, THAT WAS A REAL WALL!?”