Does it feel like we just started this countdown like a week ago to anyone else? No? ME EITHER. I want football to be here now! But, in the meantime, we are almost down to the point where we can say “Just one more month to go”. Currently, though, we’re at 38 days. And you know what that means. That means— EDGE Demitri Washington 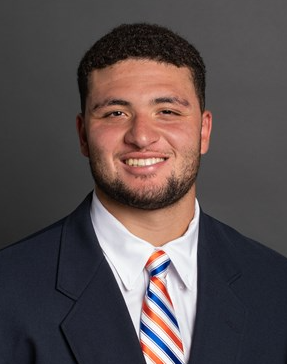 He was a consensus three-star recruit coming out of high school so he had no shortage of demand for his services. Among others, Washington State, Arizona, and Cal. He also boasted a number of offers from the Ivy League, with additional offers from Cornell, Yale, and Columbia. Even the reigning Mountain West champions * cough * thatboisestatebeatbythreetouchdowns * cough *, Utah State, offered him.

You can view his high school Hudl highlights here, and you’ll be surprised to find that a lot of them are on offense.

Just like there’s a Occam’s Razor, the Bird App Razor is that if there’s already a nickname apparent via Twitter handle, don’t try to make one up.

Michael Peña, of Shooter and AntMan fame. But...pretty specifically, JUST in this photo.

His RS freshman year was his best (so far). Appearing in all 14 games, he had 4.5 sacks, 34 total tackles, and a fumble recovery. 2020 was rough because he tore his ACL two games in to the COVID-shortened season at Air Force. He started both games and had 5 tackles vs Utah State. It was pretty clear that he was not back to his usual self for the first half of 2021, but he did start 12 games. He ended up finishing with 41 tackles (2.5 TFLs), two sacks, one fumble recovery, and gained 37 yards on his lone interception.

Demitri was poised to be the next big pass rushing prospect to come out of Boise State before things went sideways in 2020 and affected half of 2021 as well. This year, however, he’s slimmed down to 260 (from 280 last year) and is currently listed on Broncosports.com as that EDGE position (rather than “end”). In that role, he will be the #1 player on the depth chart. Regardless of of whether he ultimately lines up at EDGE or end, he will likely be the primary pass rusher on the roster. He started to find his old groove down the stretch last year, with most of his splash plays and both sacks coming in the latter half of 2021. I expect that he will finally have the breakout season in 2022 that he’s been threatening to have since his very promising freshman year.

Yes. And on it, he is portrayed as one of those mythical broncos with a singular horn. I wonder if it can pierce the sky though...

Despite his name, Demitri has never actually been to Washington. Evergreen or District of Columbia.