It’s the Friday before a long weekend. How fun is that!? While the rest of the country is going to take some time off to do some stuff, we will keep plowing through these profiles. And today? Well we have a number that needs a footballer and a footballer that is currently without a number. So he goes here. Today we have—EDGE Jayden Virgin 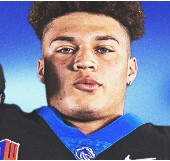 Mr. Virgin comes to the Blue as a four-star rated recruit per 247Sports. On defense he notched 144 tackles, 20 sacks and 16 of those sacks as a senior. As a tight end he had 73 receptions, 1,273 yards and 15 touchdowns in his high school career.

He had a handful of offers from other Mountain West schools including Colorado State, Fresno State, and Utah State (among some others).

It’s a terrible low-hanging fruit nick name, and obviously would work better if he was a CB, but it’s too good to pass up. 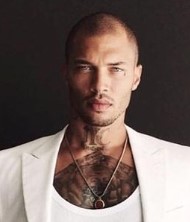 He reminds me of model Jeremy Meeks

As a high schooler he did all that stuff above. He should be able to add to this section very soon.

The defensive line is going to be very important and, historically, the Broncos have been able to get a lot of success from the EDGE position and hybriding it out almost an outside backer spot. Mr. Virgin does have the ability to play fast off the ball and he should be able to make an impact WHEN he’s able to play.

As it stands, getting on the field is difficult for D1 athletes and especially so on the uber-competitive d-line of the Broncos. So he probably won’t see time this year unless it’s garbage time, the freshman four games, injuries, or he’s just that good. I am cool with any variation of those scenarios outside of the third one.

Mr. Virgin is somewhat of a handyman who likes tinker and fix stuff. As it stands, he’s currently working through his plumbing apprenticeship and, barring any stints in the NFL, he’ll be able to plumb a whole house by himself real soon.