Already a week in...I can feel us gaining steam. With a mere 93 days until the Broncos take Corvallis...today we’ll look at #93 on the Boise State football roster—Andy Nwaoko Nwaoko was a verrrry late addition to the 2020 recruiting class, as he climbed aboard in June of that year and promptly arrived at BSU soon after. He was a two-sport athlete at Blue Ridge School on the football and basketball team and was named the Virginia Independent Schools Athletic Association Division II Defensive Player of the Year as well as to the first team defense. It’s how Nwaoko got to Blue Ridge that is probably the more interesting tale. Just a few short years ago, Nwaoko left his family in Nigeria to pursue a basketball dream in the states—moving to Virginia and enrolling in a private school where he moved in with the family of his then-basketball coach. In fact, Nwaoko had never really even heard of football when he arrived at Blue Ridge, but his size and athleticism won out and by his senior year football had heard of him. In his final prep campaign, he racked up 81 tackles and 11 sacks, and schools started calling (among them, obviously, Boise State). Nwaoko picked the Broncos over an interesting list the Broncos don’t often find themselves in recruiting battles with: Fordham, Duquesne, Howard, Albany, and Monmouth.

A proud tradition among Nigerian athletes. Guys like Christian Okoye and Kamaru Usman, to name a few.

Still think he looks a bit like Terrell Davis (if Davis had hair, obvs) 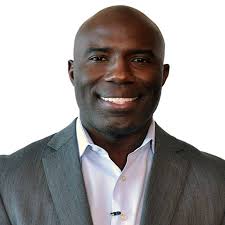 We don’t really know what we’re in for with Nwaoko...a late ‘20 commit who pretty much immediately went on IR and then wasn’t really seen during his redshirt year. We knew he was a raw prospect coming in, but one with a massive upside, so everything really is predicated on his health and his development, which remain shrouded in mystery outside the small fact that he is JACKED

Clouding up this crystal ball even more is the fact that Andy is one of only two listed Defensive Ends on the Boise State depth chart—the other is Shane Irwin. Of course, we have 6 guys listed at EDGE (Bagnah, Washington, Tarlas, Wilborn, Herberg, and Hunter) and two JuCo guys brought in to get after the quarterback—Cortez Hogans and Deven Wright—are listed simply as “defensive line”. So, it’s probably a safe bet that a couple of guys put on that “DE cap” before the season starts, so we know what the depth chart will actually look like, but in the interim...a healthy Nwaoko should be backing up Irwin and I think could start to come into his own in his third fall with the Broncos. You don’t casually pick up the game and become an all-conference performer by accident. This guy has the size, athleticism, and drive to be great. I’m hoping his body will start letting him in ‘22.

Basketball brought me to the states and even though I loved Basketball, Football chose me. Going home this summer gave me a sense of gratitude and a nostalgic feeling. So I decided to pay it foward and hopefully inspire some kids back home to give football a chance. pic.twitter.com/GMcfcaEkX4