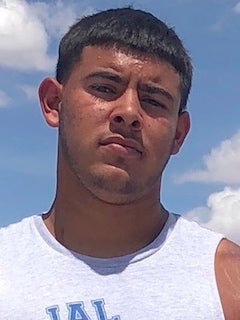 Roger was a 3 star prospect coming out of New Mexico, and the number one player out of the state for the class of 2021. He held multiple FBS offers, from the likes of New Mexico, Air Force, and Oregon State. Roger was 2A-All State in New Mexico, and even extended his skills to the basketball court, as well as the shot put and discus.

Despite the many teams aware of his talents, he told the Albuquerque Journal that once offered, Boise was his top choice. He didn’t waver from that and committed following his official visit.

When a name like Roger is short for Rogelio, you know he’s a man of culture.

It’s days like these that I’m grateful that our AI look-a-like machine is never wrong. Get Nick Jonas throwing the shot put and we’ll if he can pick up a blitzing linebacker.

Not only 2A all-state, Roger made the Max Preps Small-Town All-America team.

Roger recently graduated and has joined the team this summer. He will likely redshirt, but will provide needed depth on the offensive line. The potential here is huge, and he could make his mark quickly in the next couple seasons.

He is, @Roger_52_ and he’s cleaning up the accolades over in the New Mexico.

Discus STATE CHAMPION!!! @Roger_52_ so dang proud of you!! pic.twitter.com/YBMWrdVttd

Roger claims he makes the world’s greatest french toast. While scientists have debated for millennia on the optimal french toast making process, Mr. Carreon believes he has the secret ingredient: Tabasco hot sauce.