“Home is anywhere that you know all your friends and all your enemies.”― Orson Scott Card

Share All sharing options for: Know your enemy 2021: UTEP edition

Hopefully we’re over the sads now and ready to exact revenge on the Miners of UTEP tomorrow evening. I know I am. We’ve already talked about the Xs, the Os, and answered a couple of Qs. Now it’s time grow your knowledge. It’s time for Know your enemy.

10) Long before UTEP existed and even before Marty Robbins fell in love with a Mexican girl there, El Paso, TX was founded as El Paso del Norte (“the northern pass”) by Spanish Franciscan friars (out of the frying pan, as it were). Initially, the settlement was part of New Mexico but after Mexico found Texans revolting (how rude)...the annexation by the United States “shifted” the border just a bit and BOOM (HT: Jay Tust)—El Paso was not to be messed with. Soon after, the town further BOOM’d with lead and copper smelters, and popular boomtown vices of the day (hookers; booze). Come to think of it, I think those vices still enjoy some renown.

9) You want a six degrees of separation between El Paso and Boise? You got it. In 1934, Walter Varney and Louis Mueller established a passenger airline in El Paso called Varney Speed Lines. This airline was later taken over by a fella named Robert Six and relocated to Denver, CO where it eventually became Continental Airlines. Well, Walter was even more prolific than descendent Jim and had founded an air-mail line 8 years prior in Boise, Idaho known as Varney Airlines—where exactly in Boise, you ask? Just what is now the campus of Boise State University. Oh, and Varney Airlines eventually became another flyin’ powerhouse: United Airlines. I’ll call Disaster Kleenup to deal with all the blown minds. 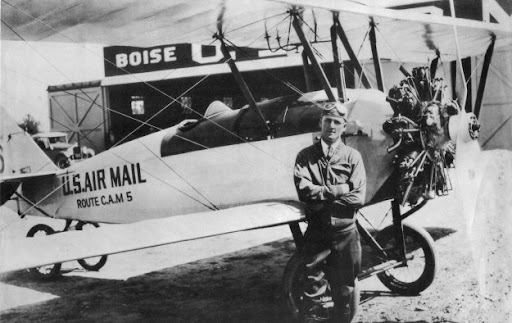 “Varney’s the name. Founding airlines is my game.”

8) What’s now known as University of Texas at El Paso was founded in 1913 as the State School of Mines and Metallurgy. The school featured a “practice” mineshaft for aspiring miners but wasn’t what we’d call “well-attended”, with just 27 students on opening day. By 1916, the enrollment had EXPLODED to a whopping 39 students, including the first two female students. Three years after that, the school changed its name to the Department of Mines and Metallurgy and then just a year later to the College of Mines and Metallurgy of the University of Texas (CMMUT). This change lasted for a solid 29 years, before the school became Texas Western College in 1949 and finally the familiar UTEP moniker landed in 1967. What about those folks that had TWC sweatshirts or CMMUT letterhead...well, I guess they got the shaft. 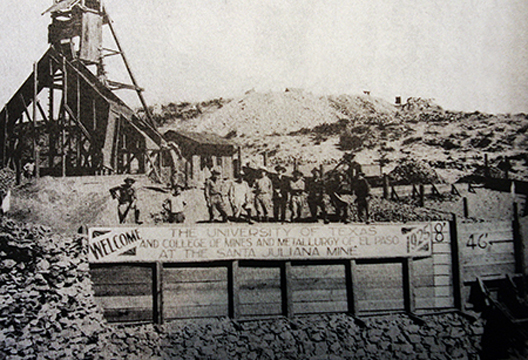 7) UTEP first competed in football during the College of Mines and Metallurgy days (1914) and their first coach was Tommy Dwyer—a former Texas A&M football player who was just 25 years old when he took the reins. With lax eligibility rules at the time (well, more lax), Dwyer even occasionally suited up for the squad, but nonetheless they lost their first game 19-0 to New Mexico A&M (now New Mexico State) and won just 9 games to 11 losses under Dwyer’s tutelage. They might have won more (or perhaps lost more) but they took the 1918 season off whilst Dwyer served in World War I...so more importantly, he had a 1-0 lifetime record against Kaiser Wilhelm.

6) James G. Brann, a sportswriter for the El Paso Herald first coined the Miners nickname for the squad the first year they started competing—1914. Back then, many schools didn’t initially choose their nicknames, but rather they were bestowed on them by the press. As such, mining schools were, by and large, called “the Miners” (just as agricultural schools, were usually “the Aggies”). Because Brann had used the term first, rival papers were loath to do the same, and referred to the team as simply “Mines” or “the School of Mines team”. At various points, the teams were also known as Muckers, Ore Diggers, or “Hey You!”. Obviously, the Miners won out and the school trademarked the name officially in 1981, probably igniting the “pickaxe craze” of 1982.

5) The “Miner” might have been the school’s primary nickname from the start, but the mascot was not the current stereotypically handsome and fit prospector. No, early on the school’s mascot was voted on and was the stately burro (that’s a little donkey, to the layperson) and the little fella (or lady...let’s be fair) was recognized as such in an official capacity from 1919 to roughly 1999 even though the miner caricature had been in use by the school athletic programs since some time in the 1960s. Marshall Meece, a civil engineering student at the university drew a hardhat miner character in 1962 that was adopted by the athletic program, and incorporated into the home field 12 years later—that same year, the alumni voted to name this human mascot “Paydirt Pete”, beating out other great suggestions like “Black Lung Bill”, “Pickaxe Patricio”, and “Unusually large forearms Frank”. 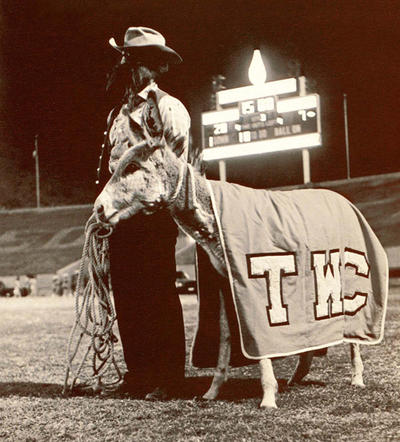 4) As Texas Western, the Miners won the 1966 NCAA Basketball Tournament—a 72-65 victory over Kentucky. Traditionally known as an “upset”, it really wasn’t in the traditional sense...TWC was ranked #2 in the country while Kentucky was #1, but it might have upset some sensibilities at the time (the bad kind), as Texas Western was the first team to start 5 African-American players in a title game. Occurring at the height of the Civil Rights Movement, the game was obviously a pivotal and important one (Kentucky had no black players until 1971) and was the subject of the 2006 Disney film Glory Road. The film stars Josh Lucas as Texas Western coach Don Haskins and has Jon Voight reprise his role as “unlikeable other head coach”.

3) Becoming the winningest coach in Miner history really doesn’t take that much doing, to be quite frank, as they have a .398 all-time win percentage (127th in the country). In fact, between 1972 and 1985, UTEP never had a coach win more than 20% of his games. Then Bob Stull arrived in ‘86 and set the “new” standard of excellence at .583 (a record that would’ve gotten him tarred and feathered in Boise, ID). Since Stull’s departure in 1988, no UTEP coach has gone more than .471 on his career win percentage. Oh right, we were talking “winningest coach”...well, if you’re going by number of wins, that’d be legendary Mack Saxon, who won 66 games (to 43 losses) from 1929–1941. If you want to talk win percentage (and let’s be honest...who doesn’t?), the honor goes to Mike Brumbelow, who coached for 7 seasons and won 65% of the games he engineered AND won UTEP’s (then Texas Western) ONLY outright conference title.

Usually the coach with the worst win/loss record at a school is referred to as a “bum”, but one bum—Bum Phillips, might be the school’s most well-known former skipper. Phillips coached at UTEP for just one season—1962—but then went on to become a legendary NFL head man for the Houston Oilers and New Orlean Saints. He even sired another NFL coaching vagabond, Wade Phillips. Bum is known for his colorful quips (many of which Brian Kelly is preparing to mangle in future postgame interviews), but my favorite might be when it was remarked that his running back Earl Campbell got up slowly, “Yes, but he goes down slow, too.” 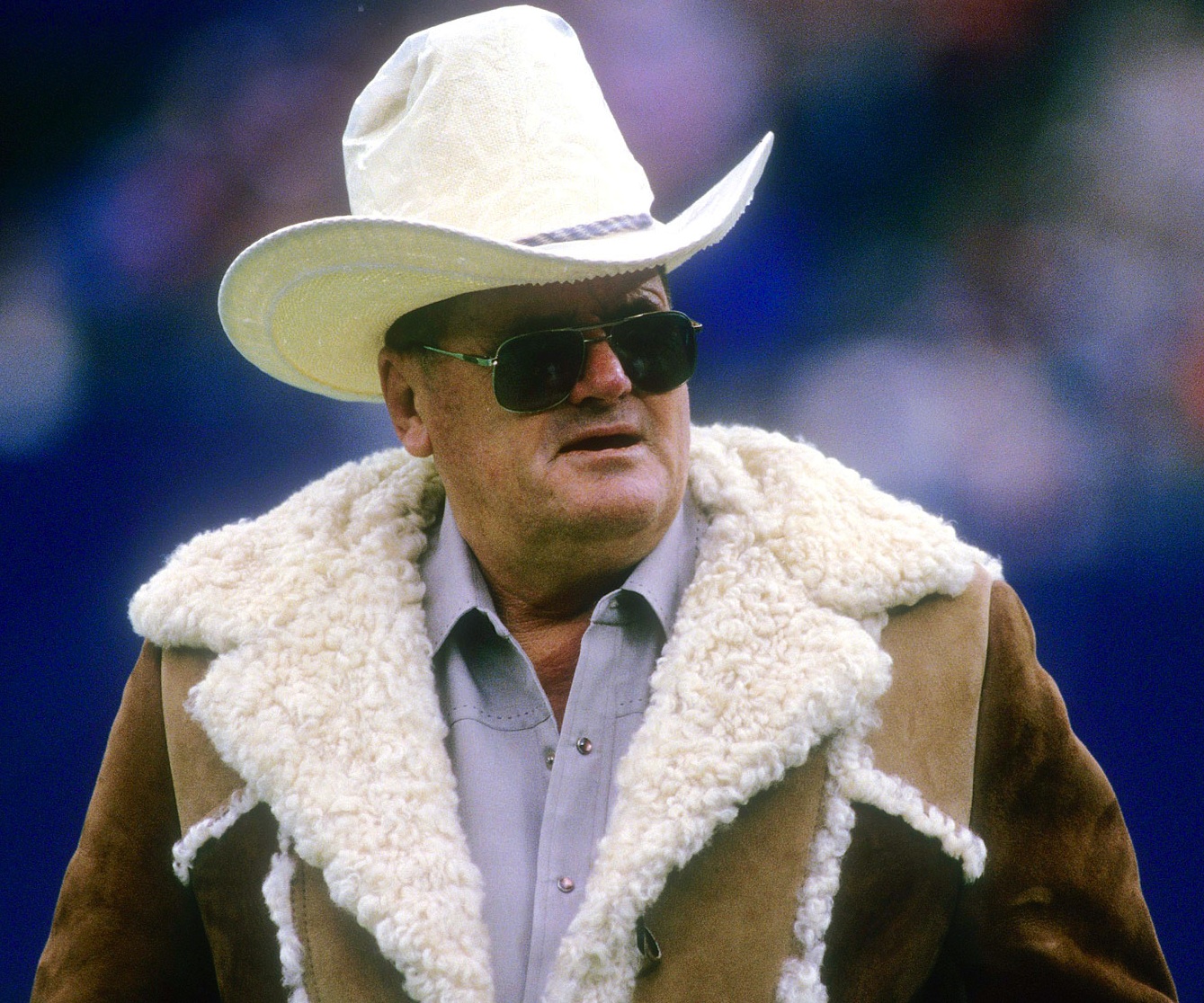 2) Despite not exactly ever needing to use it for postseason play, UTEP is home to, and plays their home games at, The Sun Bowl...a 51,000 seat on-campus stadium that was opened in 1963. The Sun Bowl shares its name with the bowl game that is played there annually—currently pitting a Pac-12 opponent with an ACC opponent. The Sun Bowl (game) is actually rather older than the venue...by around 30 years, but originally the games were contested at El Paso High School (for the first three years) and then at Kidd Field until the Sun Bowl was built. No chicken or the egg scenario plays out here...the stadium is named after the bowl game, but no one knows how the bowl game got its name. Some say it’s named after a gaseous ball of hot plasma at the center of our solar system, while others believe it’s named after Jimmy Sun, who owned a successful dry cleaning business in the greater El Paso area in the 30s and 40s.

1) El Paso is known as the boot-making capital of the world. THE WORLD. Celebs have been known to jet into town to sample the wares of over a dozen local bootmakers...sadly, none of which are Zapateria La Bailarina.