First, just getting this out there that had the refs let that fumble recovery play out, the game would likely have been very different: 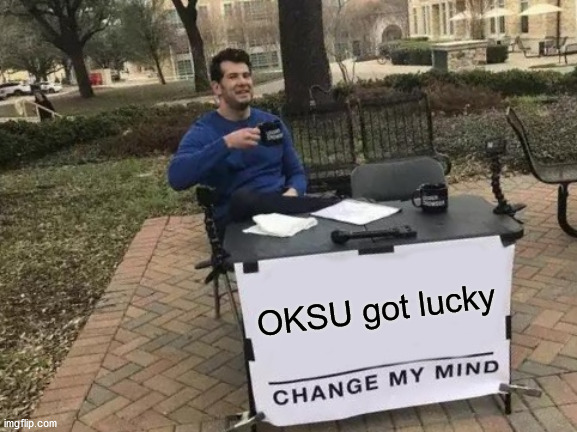 But until my time traveling crystals come in the mail there's nothing to do about that. I'm not bitter...

Anyway, Boise's offense didn't do bad in the first half. 224 yards, 16 first downs and 20 points against a good defense. But the second half? 79 yards, 3 first downs and no points. So what happened?

Since I have some extra time and little to do on Sundays anyway, I watched the second half again to pick some things out. I'll include screen shots of what I found, but since the internet is being weird I won't be able to include gifs of the full play (sorry). I'll include the context of the play if you really to watch them in real time.

I won't go over every bad play, but one or two from most of the drives to give an idea of what went down.

This is a run to the left side with Holani (white). First, Shakir (Red) will go in motion to the other side of the field. The right guard and tackle (green) will pull to the other side, and Evans (Orange) is out blocking too. 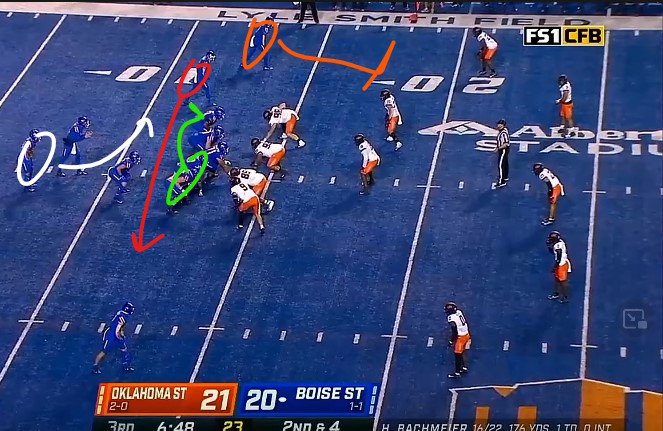 Immediately there are some issues. First, Shakir going in motion was ideally going to force the defensive backs to move away from that side of the field (black). They didn't follow, both stayed home. So now Evans has two guys to block, and later he hesitates to make a decision. Meanwhile, OKSU's all-world linebacker (yellow) is on the edge. He's supposed to be blocked by Dooley (green), but.... 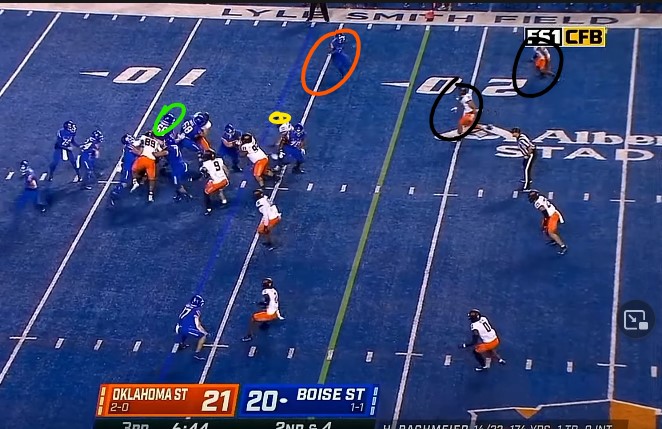 Dooley literally runs into his own guy. 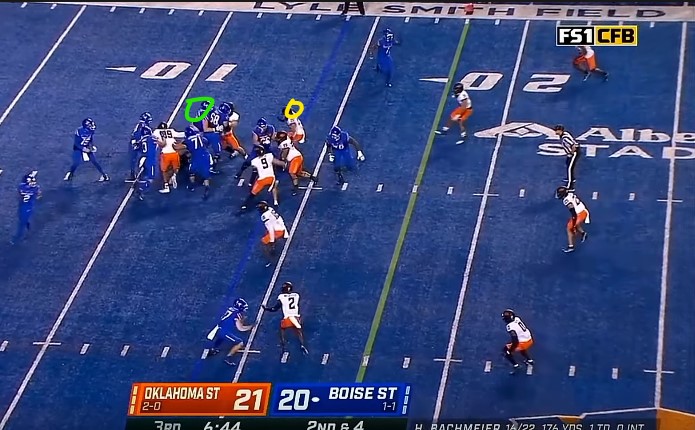 Holani is able to break away from the linebacker because he's Holani, but Evans's hesitation leads to him not blocking anyone. Both defensive backs get to Holani for a 2 yard loss. Had either of those mistakes been avoided it's likely a 3rd and short, but instead it's 3rd and 7. 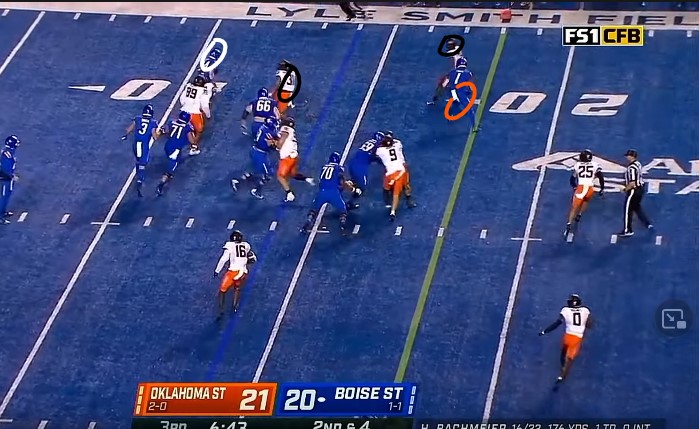 Feel like this doesn't need much explaining. You can probably guess what happens. 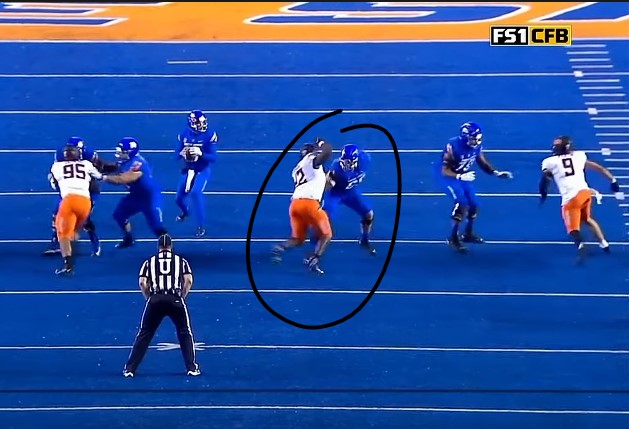 If you guessed a sack, you are correct!

OKSU's defense played very aggressive in the second half, blitzing six and sometimes seven defenders. This is one of them. Habibi-Likio motions out, leaving five guys to block six (all yellow). If my math is correct that means at least one guy is going unblocked. 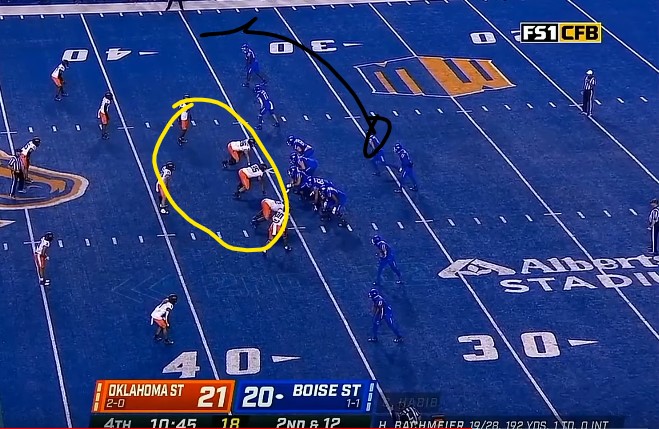 The edge rusher is that man, and Hank (white) tries moving to his left. Evans (orange) is the only receiver Hank sees, but he's not totally open. Depending who you ask this is either on Hank or Evans. Hank should have just tried to throw this away, or Evans needs to come back to Hank instead of just standing there. Sure he wouldn't have gotten much, but it makes it easier for Hank to get the pass off. Instead it's a sack and a 3rd and long. 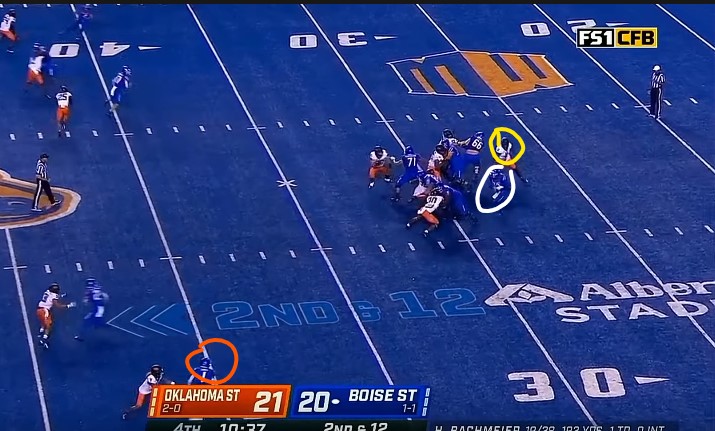 I skipped the next drive, where Hank throws an interception. Hank wasn't pressured and just overthrew the guy, not much to analyze.

Here we have another run play, but this time Shakir, Boise's greatest receiver ever (yeah, I said it!!!), takes the ball (red). I want to say Riley Smith is in the slot (white) but it might be Latrell Caples, couldn't quite tell. Koetter is also blocking (orange). Those two receivers are going to be blocking three defensive backs (yellow) 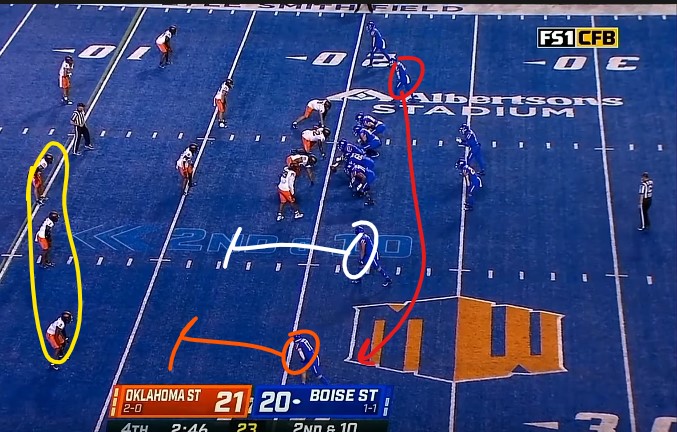 Now, before I go on, I admit my football experience is limited to being a bench player in high school. That being said, this doesn't make sense to me. You have two defenders (yellow) running to the ball carrier. The third (black) is literally back pedaling. I think it makes more sense to block the guys deliberately going after the ball carrier, but the the slot guy blocking (white) disagrees. 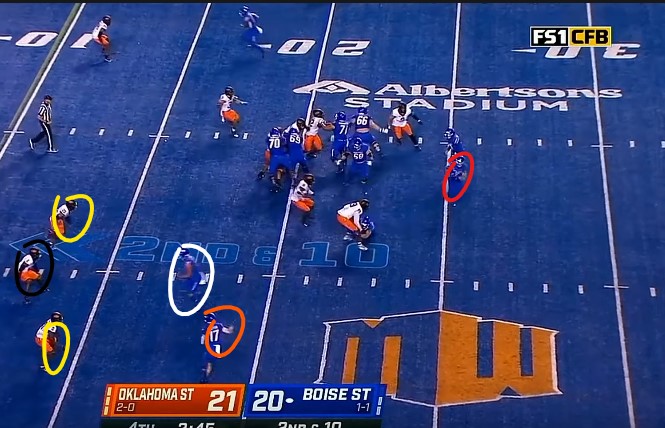 Which leads to this problem: You have a blocker going after a guy who is literally 15 yards away from the runner, and Koetter is left blocking two guys actively pursing the ball carrier. Unless he pulls some crazy WWE style move, one guy is getting free. And while Shakir can probably take most guys one-on-one, I prefer that happens down field rather than at the line of scrimmage. The corner makes a good tackle and this play gets zero yards. 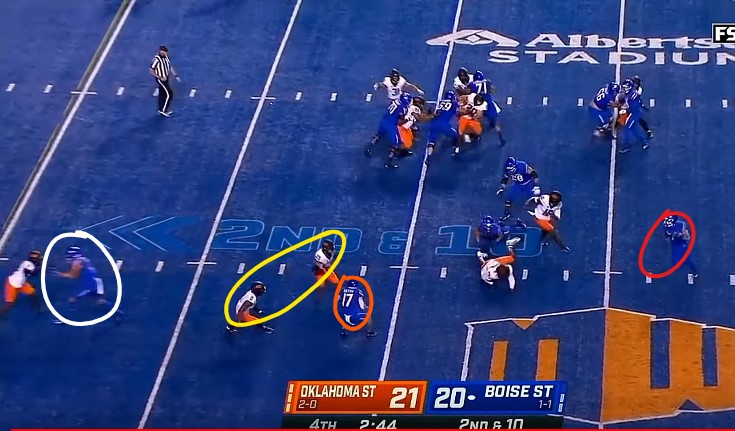 This is the next play, and also the last offensive play for Boise. Oklahoma State again is going to do a six man blitz (yellow). But Boise is going to keep Smith (red) in to block. 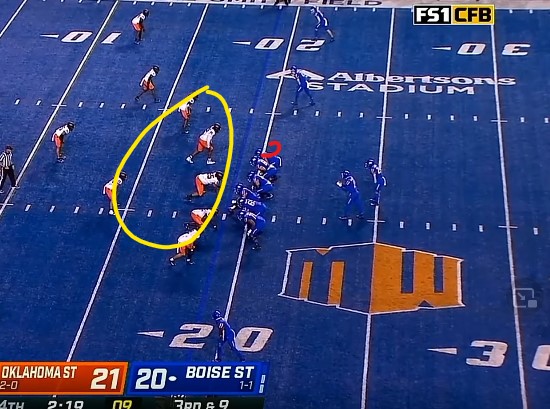 Now, I think this is an RPO (run-pass-option). Just going off film it's hard to tell when exactly teams call those, since sometimes they have linemen moving certain ways or receivers running routes as a decoy. But this one has me confused. Either it's horrible pass protection or Hank made an executive decision before the ball was snapped. I'll explain:

First, Hank does pass it, but the linemen are running upfield (green and orange) and not picking up blitzers like they would on a pass play. Okay, so maybe it is an RPO. But when you watch the play Hank is almost lazy with handing the ball to Holani, which has me thinking he made up his mind before the play even starts. 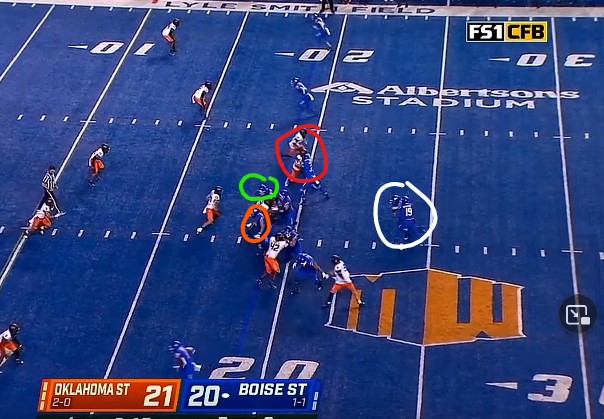 Was it the right call, if it was an option? Well... 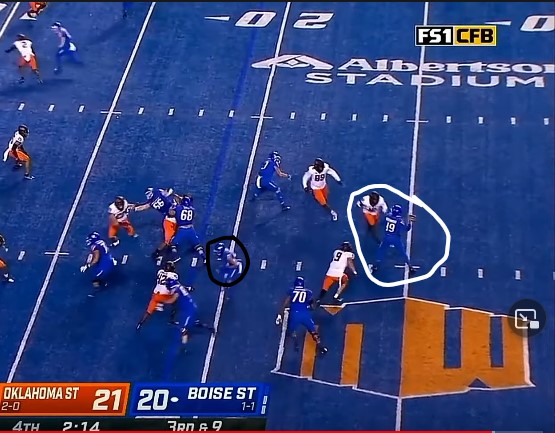 What would you say the chances of this being an accurate pass are? He's got three defenders right on him, while four (4!!!!!) offensive players are not blocking anyone at the moment. Outside of Patrick Mahomes and Ryan Fitzpatrick, no one is making that pass. He overthrows Shakir and Boise goes for a field goal, which is blocked.

If this was an RPO, Holani (black) only has one guy in his path. He can easily bounce outside and get some extra yards. Yes, I know, the field goal after this was blocked, but that's not the point. This was Boise's only drive that half that put them in scoring position, and Oklahoma State hadn't been doing well on offense either. Running the ball either runs the clock down or forces a timeout.

Some of these mistakes are somewhat simple, but it's concerning they're still happening in game three (which is a quarter of the regular season, by the way). The two most common mistakes I found in the second half were unblocked defenders making plays, and pulling linemen not getting to the edge quick enough.

The common theme though is blocking, whether on pass or run plays. Seems like it's been a few years since Boise's offensive line has been considered decent. In the past though it has been able to improve as the season goes on, but that doesn't usually happen naturally.

This isn't the first offensive line to have issues, and it wouldn't be the first offense to play well despite that. Sometimes coaches get too concerned with the "right" type of yards, or we want to run the offense a certain way. Honestly, it doesn't matter. Mike Gundy is a pass-first coach, but he didn't have an issue this game with abandoning the pass once he realized it wasn't working. And as the great Kellen Moore recently said, "Yards are yards.... I really don't care"