“I ask you to judge me by the enemies I have made.” —Franklin D. Roosevelt

Share All sharing options for: Know your enemy 2021: UCF edition

At long last the day has arrived and soon the night will arrive wherein we play a real, live football game. Boise State and UCF aren’t so different really...both have won a silly number of games the last five years, both are relatively new to FBS football, and obviously both universities reside in humid, swampy locales (might need to fact check that last one). At any rate, we’ve already been discussing the Xs and Os...now it’s time to talk about the more trivial matters. It’s the first Know Your Enemy of the season...let’s dig in.

10) The treaty of Moultrie Creek created a Seminole reservation in central Florida in 1823 including an area that would eventually become Orlando—known for mosquitoes and Epcot Center. Truly, the county containing the future city was initially called Mosquito County, but was eventually renamed Orange County in 1845 and about 12 years later the town that’s now Orlando was laid out, but it wasn’t much of a bustling berg until reconstruction after The Civil War when the population exploded to a whopping 85 residents. Within 10 years, it was officially a city and became the hub of the Florida citrus industry...that is, until the “great freeze” of 1894 which forced many citrus farmers to sell to “citrus barons’ further south.

No one seems to really know how Orlando got its name, but there are theories. One, focuses on a poor soul named Orlando that was either killed during the Second Seminole War or just randomly out for a stroll. Some say the area was called “Orlando’s Grave” until the Chamber of Commerce was like, “that’s a little dark isn’t it?”. The other theory is that it comes from the name of a character in the Shakespeare play As You Like It (a character I presume was named Orlando) and was chosen by a cultured gentleman to replace the original name “Jernigan”. Whichever story is true (or perhaps neither are), I think we can agree that “Orlando” looks a bit better on postcards than “Jernigan” (although Jernigan looks dope stitched on to a hat). 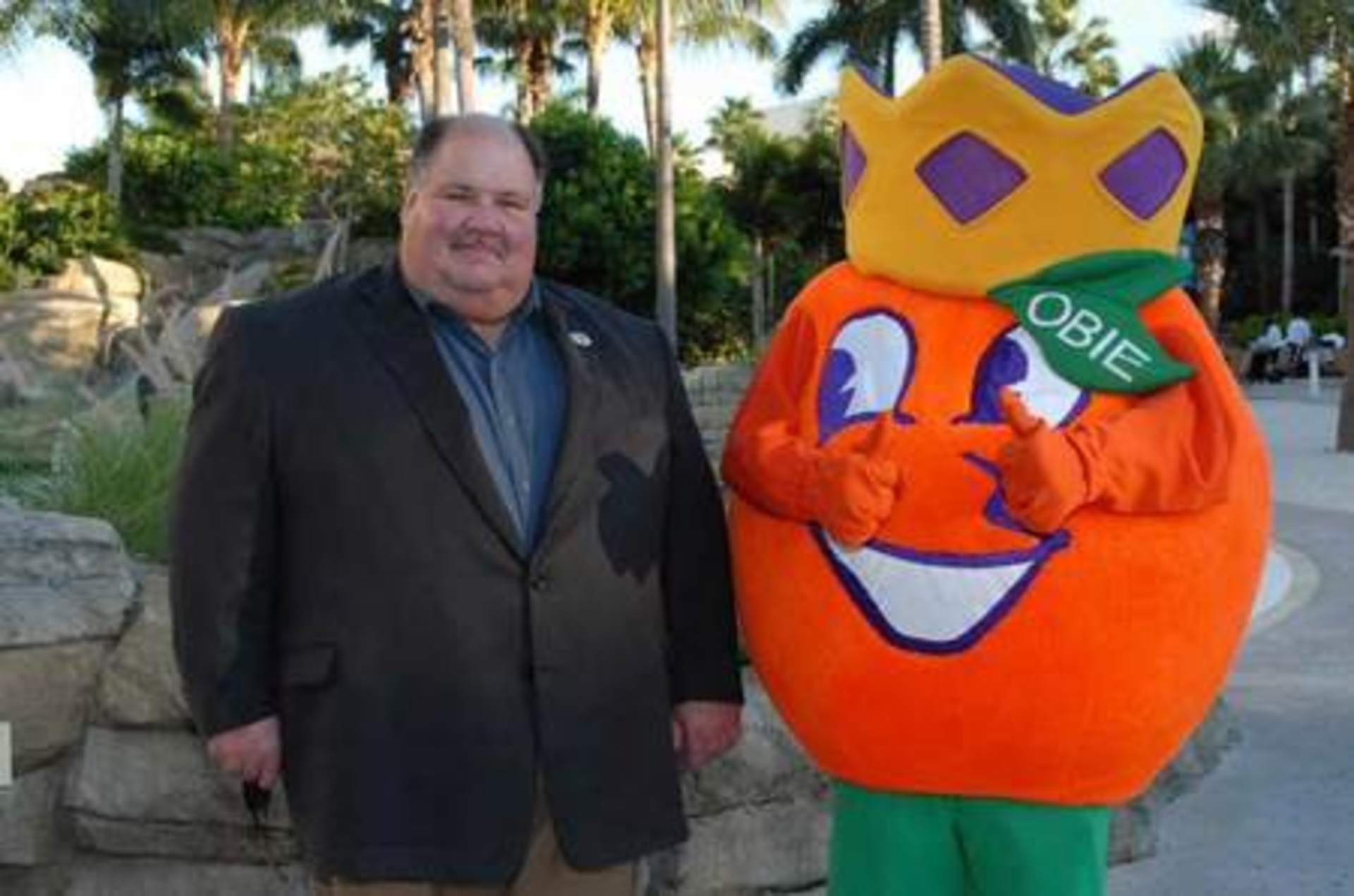 9) What you now know as the University of Central Florida or “UCF” began as Florida Technical University (FTU) in about 1963, so it’s actually just older than your dad and waaaay younger than your mom. The university was conceived during the fervor surrounding JFK’s “I have a dream...we went to the moon” speech that got everyone hopped up on the idea of driving dune buggies through moon craters. Specifically, those close to Cape Canaveral (35 miles to be exact) and the Florida “space coast” (not to be confused with Space Ghost). The mission statement at the time was pretty clear: “make space men and women and maybe chimps” and the school was centered on feeding engineers into the space program, but eventually grew to contain non space-related studies like, oh I don’t know: Citrus Studies?

The UCF name didn’t come around until 1978, just in time for our next factoid...

8) Even though UCF as we know it is a product of the 1960s, they didn’t field a football team until 1979 when university president Trevor Colbourn tasked AD Jack O’Leary (no relation to Mrs. O’Leary or her cow) with forming a squad. The team started out at the Division III level to get their feet wet and prospective athletes actually paid to tryout ($14 to stay in the dorms and it was strictly BYOU—Bring Your Own Uniform). The team had no budget for staff, but O’Leary was able to secure the rights to play home games at the Tangerine Bowl and somehow also convinced Don Jonas, a former NFL quarterback to voluntarily coach the team.

UCF played their first ever game on the road September 22, 1979 against St. Leo University (an early rival of Bishop Sycamore) in a glorified cow pasture and emerged victorious with a 21-0 shutout. Their first ever home win came a week later against Fort Benning. All told, Jonas led the team to a successful 6-2 inaugural season and even attracted some looky-loos with a season average attendance of 11,240 (twice that of the current Kibbie Dome average). Jonas would stay on for two more seasons, but could never quite replicate that magical 6-win season and departed after the 1981 season. One bright spot on those first UCF squads: Tim Kiggins (no joke...google it) was named a third-team All-American and was the first Knight to sign a professional football contract—with the mighty Argonauts of Toronto.

7) Back when they were still “FTU”, the school’s first mascot was the “Citronaut” which if I was describing to someone I would probably say “y’know the Great Gazoo from Flintstones? Yeah, him but he went through The Fly teleporter thing holding an orange”. Truth be told, the Citronaut is ten times cooler than the current mascot (and contains 100% of your recommended daily amount of Vitamin C), but I have a deeply-held belief that all mascots should look like they had their own Hanna-Barbera show. By 1993, Gazoo Citronaut had been replaced by a Golden Knight and perhaps because it was still the American Gladiators era, he was named “Knightro”. What some don’t know (and this is not a joke, people) is that there is a lady knight as part of the UCF mascot package known as “Glycerin” and nothing says “true love” like combining to blow up a railroad tunnel. 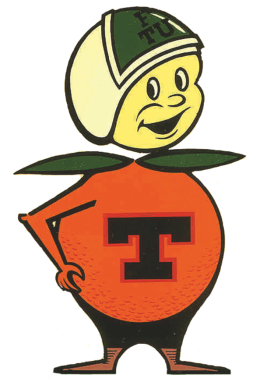 6) As they’ve only been playing football for a tad longer than I’ve been alive, they haven’t gotten that deep into their coaching tree yet. As such, they don’t have any real “lifers” at the helm, and of late, haven’t had a skipper hang around for more than two seasons. That said, the closest UCF has to a Rip Van Winkle is probably Gene McDowell, who coached the team for 13 seasons (‘85-’97) and posted a super okay .585 win percentage (as well as a perfect 3-3 in bowl games). McDowell’s long tenure allowed him to amass the most wins as a Knights head coach (86) and he doesn’t even have the most losses (that honor belongs to George O’Leary—again, not related to that lady or her cow). An impressive three head coaches have left the school with a .000 win percentage: Sam Weir, Alan Gooch (tee hee), and Danny Barrett. The winningest coach in school history if you’re simply looking at win percentage just left town...it was Josh Heupel, who posted a .778 win percentage whilst in Orlando and seems like a super cool guy. 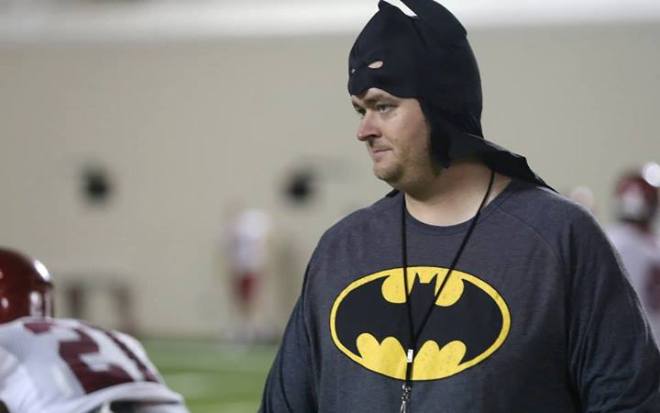 5) UCF has two main rivals: reality and USF (University of South Florida). For the sake of brevity, we’ll focus on the second. USF is UCF’s natural rival mainly because of proximity (they are less than 100 miles apart) and being founded around the same time (think only child becoming a big brother). The schools have been playing one another on some field, court, or pitch since 1971 and as such the two schools created a “friendly” annual competition known as the War on I-4. In this somewhat unique competition, the two schools are awarded points for a variety of varsity sports against the other, with the cumulative points winner being awarded the trophy—shaped like an interstate road sign—each year. A separate trophy is awarded to the winner of the annual Thanksgiving weekend clash betwixt the football teams and believe it or not, USF actually holds the edge on the gridiron with a 6-5 edge. Man, what were these schools, made yesterday? 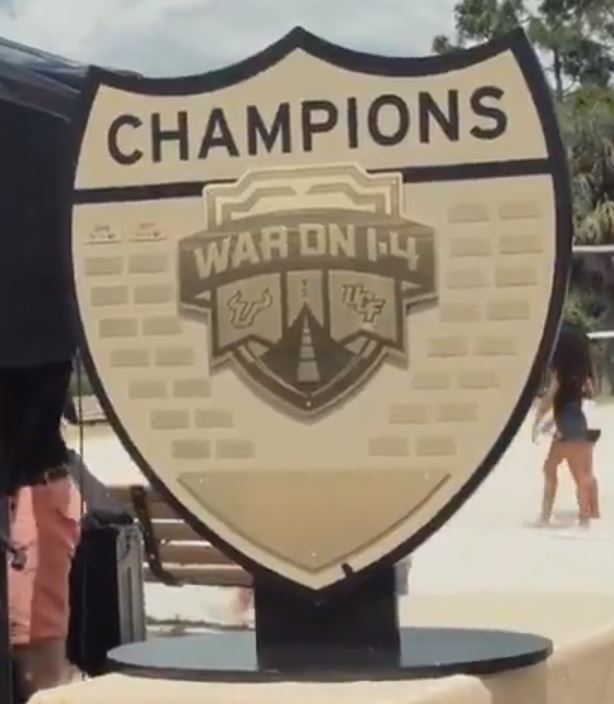 A gilded road sign to the winner, a bronzed traffic cone to the loser.

4) UCF plays their home football games (and indeed will play the Broncos there in a few hours) at 3MG Stadium, affectionately known as the Bounce Castle House. The stadium currently seats upwards of 44,000 fans/well-wishers and was opened in 2007 as a replacement for Camping World Stadium aka the Citrus Bowl aka the Tangerine Bowl (you remember, from fact #8?). When the stadium opened in 2007, it featured zero drinking fountains (no, that’s not what those troughs are for, Jerry!) as the university didn’t think they were required...they were. A 2004 Florida building code required that any stadium or public arena must have one water fountain for every 1,000 seats (so UCF was just like 40 or so short). As they didn’t have time to remedy the situation before their first game against Texas, the vendors ran out of water at halftime and 18 people were hospitalized for heat exhaustion. Lest you think that’s a possibility tonight...UCF eventually rectified the situation by installing 50 water fountains at 3MG and also “furloughing” their building code reader guy.

3) Like Jem, UCF’s enrollment numbers are truly outrageous (truly, truly, truly outrageous) ...more than three times the size of Boise State’s (and Boise State’s ain’t no slouch). At roughly 71,000 students, it has the largest student population of any public university in the United States, and if UCF were a city in Idaho, it would be the fourth largest in the state—ahead of Idaho Falls. Of course, having the largest student enrollment has it’s drawbacks as well, including the largest lost and found, the longest line for the ladies room, and longest wait of any Chick-fil-A, at an unbearable 2 minutes.

2) UCF has a lot of distinguished alumni...astronauts, inventors, dignitaries, Playmates—but have any of those people powerbombed Seamus on Smackdown? None except Cal Bloom, who played tight end for the Knights until 2016 and now is smacking folks down (and up) in the WWE. Just days ago, Bloom (who had been wrestling as...well, “Cal Bloom”) changed his wrestling handle to “Von Wagoner” leading people (me mostly) to wonder if a heel-turn is imminent. C’mon, if a guy changes his wrasslin’ name from “Cal” to “The Kaiser” or some such, you know he’s going to have brass knuckles stowed in his boots. Bloom is actually a second-generation wrestler as his dad Wayne “Train” Bloom wrestled for the WCW promotion and WWF (not the World Wildlife Fund) as “himself” and as “Beau Beverly”. More importantly, Papa Bloom rocked one of the better wrestler mullets of the era. Observe. 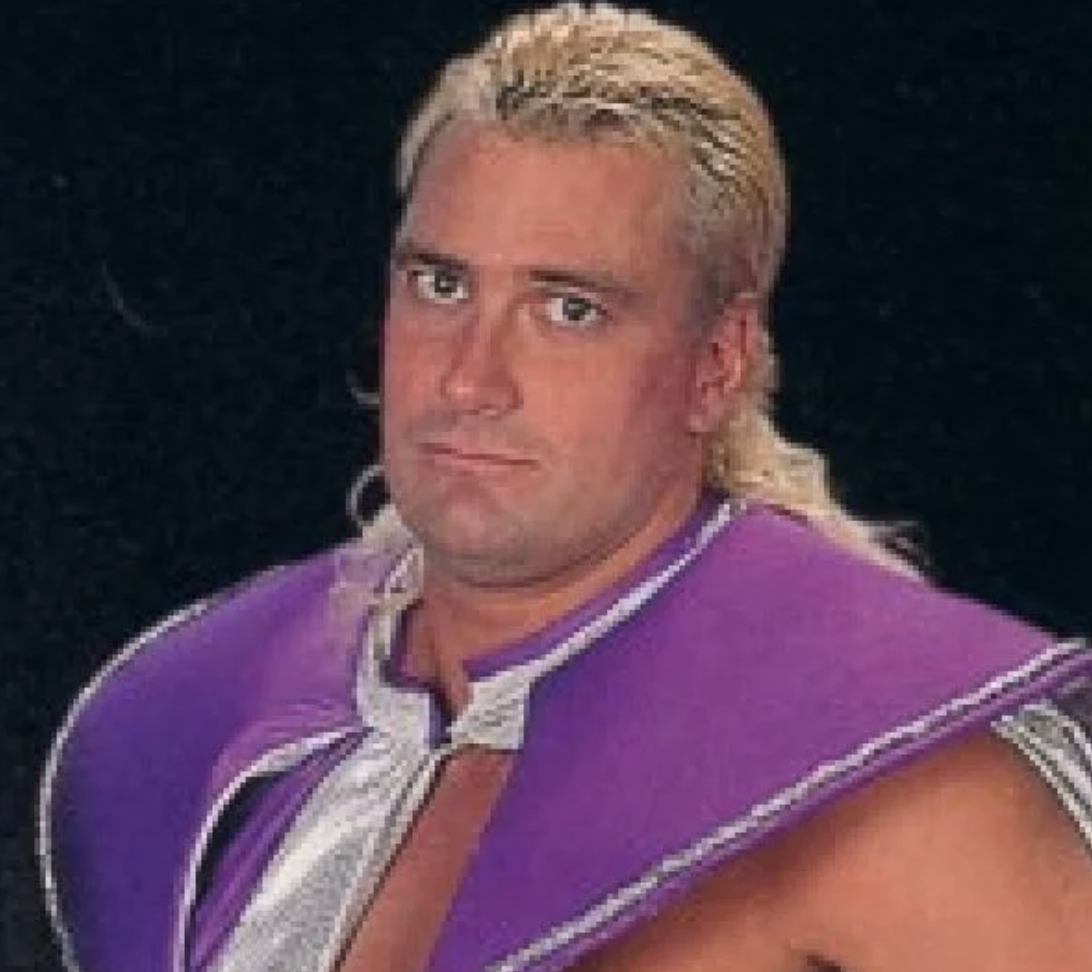 Mullets AND purple capes both making a comeback.

1) Though the university is closely tied to a wacky half-orange space man and an explosive knight...the logo actually contains a third character—Pegasus. The winged mythological horse is said to symbolize the university’s “vision of limitless possibilities”, which I think could have been better signified by a headshot of Bradley Cooper, because y’know...he was in that movie Limitless. 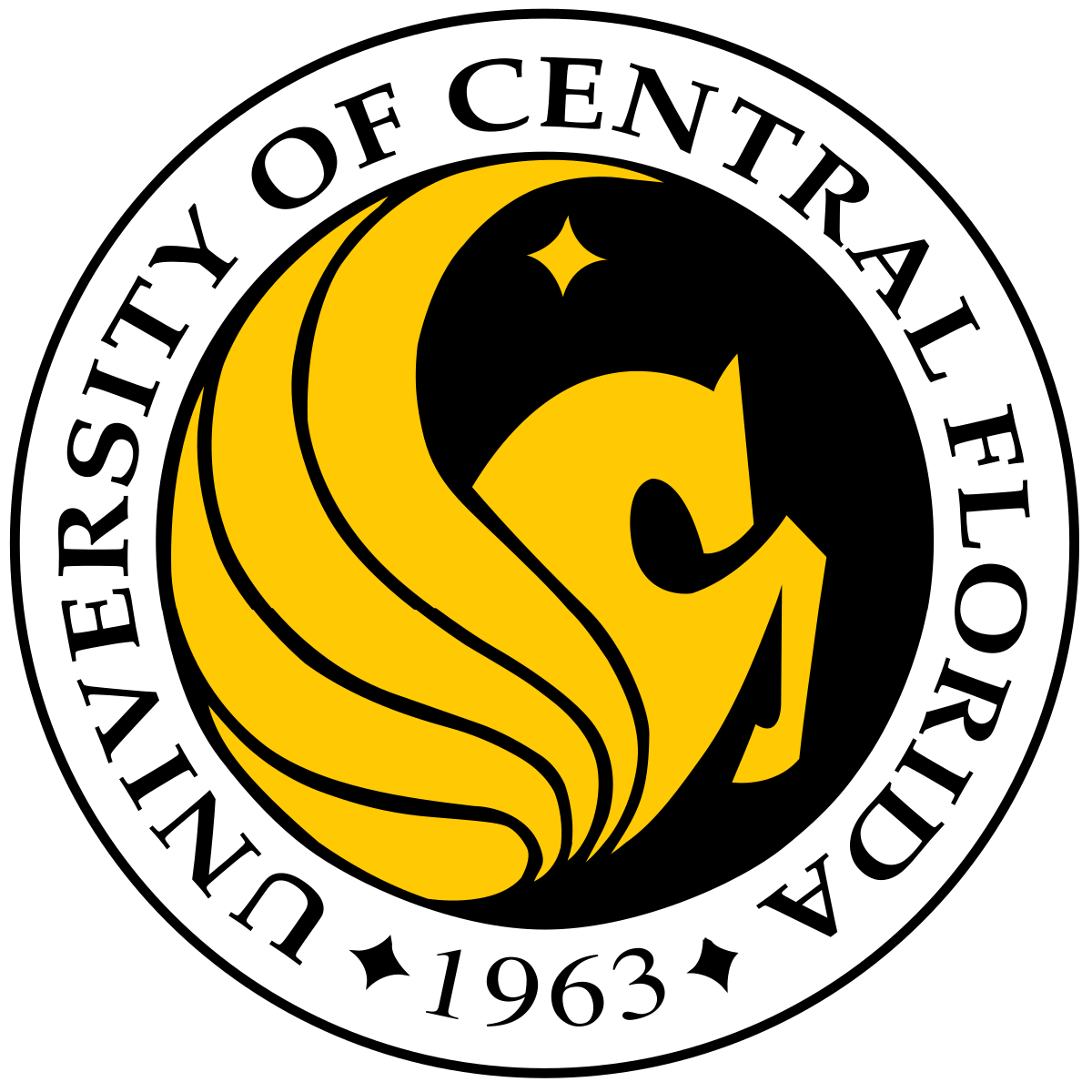 On the wings of love.