Curran was a November commit from 2017 that selected the Broncos just after wrapping up an official visit to Washington State. Either he must have really hated the literal ups and downs of the WSU campus and didn’t want to build calves that wouldn’t fit into any of his pants walking to and from class, or he just preferred Boise State that much more. As a shameless homer, I’m choosing to believe the latter. Also, because who wouldn’t want rippling gastrocnemii? Still though...apologies to Jay Tust. Your alma mater just wasn’t enough.

WSU wasn’t the only PAC-12 school that Curran turned down to be a Bronco. As a 3-star recruit, he had his share of other offers. Among them were Arizona, Fresno State, Nevada, Colorado State, Hawaii, UC Davis, and Utah State. He came to Boise State having been a first team All-San Diego Section selection in 2017 and named to the second team All-CIF San Diego as a junior. In both his junior and senior seasons, his squad made the playoffs. Additionally, Curran was a baseballer and a wrestler. Of which, the latter skill has a great deal of utility when translated to linemen in football.

Yeah, it’s just his initials...but it COULD stand for “General Counsel” (it doesn’t...it’s his initials) 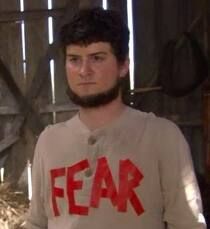 Mose Schrute. It’s the beard (and the beets)

Appeared in all 7 of the Broncos games in 2020—earning All-MWC honorable mention. Had a rushing attempt in 2020 (it went the...wrong direction). Appeared in 12 games for the Broncos in 2019, with one start. First-team All-San Diego Section as a senior in 2017. Second-team All-CIF as a junior in 2016.

Right now, I’ve got Curran penciled in at starting left guard—that’s the benefit of the doubt you get by being named Honorable Mention in the MWC—but I can also see his heels fully nipped by Tuesday’s highlightee (it’s a word!) Dallas Holliday. Curran and Holliday are close at the moment, but I think that Curran is probably a bit ahead based on 2020 results and the fact that he was runnin’ with the ones at the Spring Game.

Now that we’re well into the O-lineman in our annual countdown, it’s fair that we speculate on the game one starters...and if UCF were tomorrow (I wish), I think you’d see Curran at LG, next to starting LT John Ojukwu and center Kekaniokoa Gonzalez, then I think you’d see Jake Stetz and Ben Dooley at RG and RT, respectively. That’s pretty much what we saw in the Spring Game and barring injury or some crazy Fall surges, I think we’ll see that again come game one. Of course, this is also probably the most experienced shift you could put together as well, so as important as the depth is here, I think we’d all like to see some experience come to bear. Tim Keane has a large task ahead getting at least 10 guys above and beyond where they were under Bedell and if he can do it...I like our chances. Curran should bring some great size and strength to the position and help guard QB1’s “blind side”

He is, but considering that his RT of last year’s countdown is about 5 or 6 down on his timeline...he’s going for quality not quantity.

Curran and his lineman buddies chip in for a side of beef each Christmas. Since they don’t have a freezer though, they are forced to eat it in one sitting like Fred Flintstone eating Brontosaurus ribs. It’s a wild 20 or so minutes.