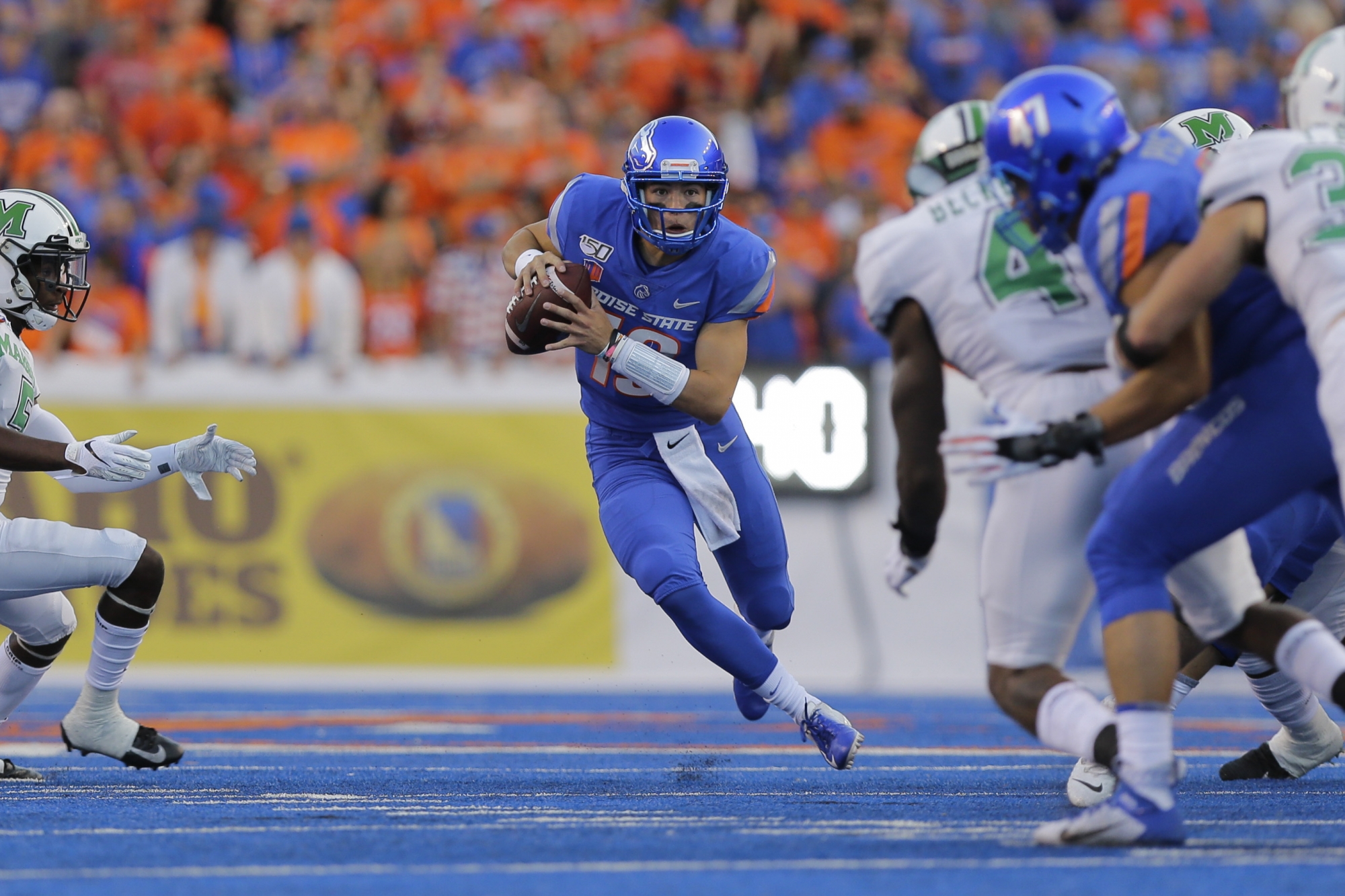 Feels like it was forever ago that Bachmeier first started against Florida State, and there was some definite immediate hype. 407 yards for a true-freshman in their first start will do that, especially since it was a road game that changed locations last minute. But how has he done since then?

It feels weird to criticize quarterbacks at Boise (mostly cause we've been spoiled), but part of me questions whether or not Bachmeier should be the one starting going forward. Motived by this question, and the fact that I have nothing to do at work right now, I went ahead and did a crap ton of data research. First, we'll compare him to the past five starting quarterbacks to have played at Boise. Since Bachmeier has only played 12 full games I'm only including the first 12 starts each of these players.

*Excluded game against Hawaii in 2019 since he only left early due to injury
^First start came as Junior, others as freshman
**No idea why those columns are green. Excel is weird.
The only areas Bachmeier has done relatively well in are winning (second only to the Holy One) and interception rate, where somehow Southwick came out on top. Outside of that he has done worse than most; Last in Touchdown and sack rate, fewest games with 300+ yards or multiple touchdowns, and lowest passer rating. There really haven't been many complaints yet, probably because Bachmeier has yet to lose in the regular season (but he is 0-2 in post-season play...)
Comparing to past quarterbacks isn't always to best way to gauge success, since the circumstances are different (i.e. different teammates and coaches). But since that first game against Florida State we've seen other quarterbacks get significant playing time in eight games. So in that time frame, how has the team done with Bachmeier playing versus him not?

The "Other Quarterbacks" are Chase Cord, Jaylon Henderson, and Jack Sears. I'm excluding last year's loss against BYU where Cade Fennegan played most of the game, mainly because I didn't think it was fair to include a third sting quarterback who hasn't played football in two years.
Anyway, the difference is pretty big. With Bachmeier out, both the interception and sack rate dropped while the touchdown rate more than doubled. If you factor out Bachmeier's first game, where he passed for 407 yards, he's averaged 233 yards per game since, a whopping one-yard better than the others. The difference is even more noticeable when you look at offensive production as a whole:
The team is better in all of these areas, doing better by about 60 yards and a touchdown per game. They faced fewer third downs while converting them at a higher rate. Even when you factor in the defenses they've face the same message is clear.
The opposing defenses as a whole really weren't much worse/better for either group. Bachmeier played to the level of the opposing defenses while the others did better. Honestly, I think that is best indicator of why the starting job should be open. And not like how Bill Belichick would say "every spot is open" when a prime Tom Brady is on the team. I mean a REAL battle. I don't know how that has worked in the past, but hopefully the new coaches have some real competition.
This isn't the first time Bachmeier's status as a starter has been questioned, and people have defended him. I've only heard three real arguments in Bachmeier's favor:
It will be interesting to see how this plays out with a new coaching staff. Most of us were hoping to see Jack Sears more, because while he only had meaningful time in one game he absolutely killed it against Air Force. Hopefully the new staff takes a good look at Sears, because we kind of already know what we have in Bachmeier.

Should Bachmeier's job as starter be safe?