This season was easily a downer for most of us, but hey, could be worse. Could be a program that has lost 22 of their last 23 games, despite a $335 million endowment fund, with that one victory being a 10-3 win over a team missing half their players.

We could go over a lot of different things with Boise State during this year, but it's always good to have some context. I'm not necessarily going to say Boise was great or terrible, or cover what they did well or did poorly. I'm going highlight some general trends that affect winning and point out how Boise fared in those areas.

First, I'll remind you that Boise finished 7-5. That's not exactly great, a 58% win percentage. Ultimately winning is the most important thing, but so many variables factor into it that it shouldn't be the only fact you look at. For example, UTSA and Alabama are both 11-1, but there's a reason one is ranked 4th and the other is unranked. How they got the wins is just as important as the wins themselves.

So how else can we better evaluate teams? Well, I'll get a little nerdy, but I promise I won't convert this into a math lesson.

You may have heard about Bill James, credited with popularizing Sabremetrics in baseball. He developed a formula called a Pythagorean Win Percentage to better look at the quality of a team. Some other math nerds at Pro Football Focus made a similar model for football. If you have nothing else to do you can read about it here, but basically it calculates an expected win rate using points scored versus points allowed. Using this Formula, here's what you come up with Boise State this past season:

That -15% fits under the status of a big difference (only 23 teams in the last five years fall into that range). So if Boise played like a team that usually wins 73% of the time, why didn't they?

Again, you can dive specifically into what Boise did or didn't do well, but I'll highlight a few things to consider:

Most people in the analytics crowd agree that a coach's ability to consistently win games decided by one possession or less is overrated. Heck, Nick Saban is only about 61% in one-possession games for his career, including 6-4 in his last 10 tries. There are so many factors that come into play: A random gust of wind screwing up a game-wining kick, the refs make a big mistake, or you're Cody Parkey. You can point out other examples, like the touchdown the Seahawks were given by the replacement refs in 2012. Or, as Chris Petersen recently pointed out, Ian Johnson nearly tripped over Zabransky on the Statue of Liberty play in the 2007 Fiesta Bowl. Going with that, what are the odds of Boise's three trick plays all working perfectly in that game? Especially in the span of nine offensive plays, at the end of the game when everyone is exhausted, with 0 margin of error on all of them? The odds have to be small.

Over time, teams tend to be close to 50% in one-possession games. This year, Boise was 0-3. It was a bit of a regression to the mean, since in the previous three years Boise was 9-3.

It's easy to nitpick each individual case on why those close turns games turned out the way they did, but over an extended period of time, it really is 50/50.

This could also be interpreted as "time missed by players", which could include suspensions or COVID stuff. In the first paragraph I alluded to Cal losing to Arizona, likely because they were missing about 24 players and coaches due to COVID protocols. Last year Boise had to cancel a few games because of it.

I don't know if players have missed time this year because of COVID, but Boise hasn't exactly been a healthy team this season. Jay Tust reported that by midseason Boise changed their depth chart 20 times because of injuries. Since Boise doesn't publicly show an injury report, I did my best to chart the players who missed time: 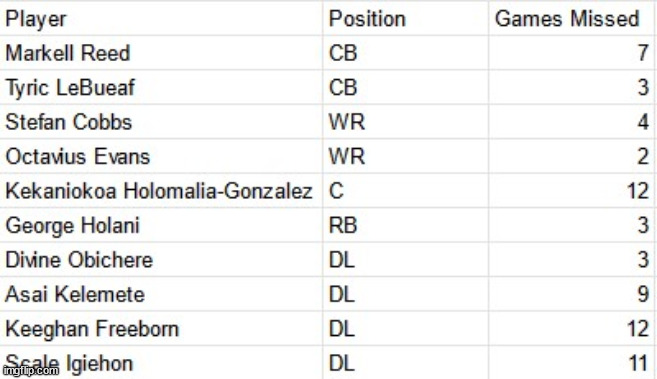 Those are just the ones I am sure of. Three other offensive linemen also missed games (Garrett Curran, Dante Harrington, and Will Farrar). Holomalia-Gonzalez was likely going to be the starting center but couldn't play all year. Of the top eight defensive linemen going into the season, there was a stretch where only four were available, with two of those players (Kelemete and Igiegon) leaving the team.

This doesn't include time missed by defensive players for having targeting penalties. Going off memory, Kaniho, Skinner, and Whimpey all were guilty of this. Also, this doesn't consider that some of these players were "available", but obviously far from 100%. LeBueaf, Evans, and Cobbs didn't look right the final four or so games, and Holani was pretty limited until week 9.

Injuries are as much a part of the game as anything else, but it does affect some teams more than others. How different do you think the outcomes against UCF, Oklahoma State, or Air Force would have been had Holani fully played and the offensive line not been a revolving door? Or how about the Air Force game; Whimpey was suspended for the first half, and in the second half he played the defense only allowed 112 yards and 3 points. What if Whimpey was available the first half?

This probably doesn't need much elaboration, but I'll give some numbers anyway from the top five Mountain West teams:

Keep in mind that Boise was the only one here who didn't play an FCS team. That column for teams who won less than 33% of their games is the biggest, since those more often than not turn into a glorified preseason game by halftime. All of these teams played a pretty bad team by week 2, except Boise. They didn't play a losing team until week 8.

Also, of these five teams, Boise was the only school to play everyone else on the list.

Generally speaking, all of these play a factor in how well a team does.

From what I can tell, this is what happened this year: Boise had a rookie head coach, rookie defensive coordinator, offensive coordinator coaching for the first time at the FBS level, leading a team with below average health and the team's hardest schedule in recent history, and couldn't catch a break in close games.

Going back to the Pythagorean win rate, often when teams are far from their expected win rate, they tend to trend towards it in the following years. In 2014 Boise went 12-2, an 85% win percentage, but were expected to win 72%. The following two years Boise won 73% of their games (cue Twilight Zone music).

So that's what I found. I can get into the specifics of the offense and defense, but I'll wait until Christmas when I have nothing better to do.

Comments? Remarks? Animadversion? (used a thesaurus for that one, Brownie points if you know what it means without looking it up. Hope I used it correctly...)