NOW they tell us that the season will begin September 26th, so yeah...our countdown is only like 21 days off or so now, but hey...we can’t turn back now. 30 days leads us to #30 on the Boise State roster—Isaiah Bagnah I can only assume he’s here because he was the most ferocious Canadian in the land. He was a three-star recruit for 247Sports and the no. 1 rated recruit in Alberta. He had a lot of interest from P5 schools but only a handful of offers (their loss, obvs). UCONN, UMASS, Old Dominion, Tulane, and Yale (he’s smart!!) were the other offers.

Sure...his last name is pronounced “Ban-yah”...but spelling is hard and I like this mafia-inspired nickname. 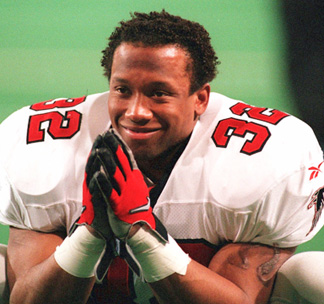 Made a couple of non-redshirt-burning appearances in 2019. Three-year starter for his old high school. Was named to the All-Canada First team and South Alberta High School League All-star as a junior. named first-team All-Canada and first-team All Provincial as a senior. Played shooty-hoops, and ran track & field.

Curtis Weaver is obviously the mega-loss among the DE corps (specifically at STUD) but the Broncos should have enough bodies to throw at that particular problem in 2020. Bagnah was able to retain his redshirt a season ago and should be ready for four years of QB chasin’ now that that’s out of the way. Since Bagnah is listed as a STUD end, we’ll focus on that particular group as we survey the lay of the land. Demitri Washington appears to be the heir apparent at STUD after appearing in all 14 games last season for the Broncos and racking up 4.5 sacks and 5.5 tackles for loss among 34 tackles. Next to Washington, LIGHTLY penciled in due to frequent injury would be Sam Whitney, who has shown some things in the past when healthy and then walk-on Dylan Herberg who played in 12 games last season and seems poised for a li’l breakout.

That leaves Bagnah and Casey Kline...who both redshirted last season and therefore have given us little inkling as to their places in the pecking order. Since Bagnah is the “fresher” of the two (Kline also has fought the injury bug), I’d give him the edge going into camp—if camp ever occurs and I like his chances to break into that rotation and who knows...he could be part of the “starting tandem” that’s sure to include Demitri Washington. There’s really no replacing Weaver, who left as the Mountain West’s all-time sack leader after just 3 years of work...but we’ve got some dudes and I’m confident Bagnah and his pals will still get that job done.

Fam away from home #BleedBlue pic.twitter.com/XeJpHMjKLH

Making Canada-specific made up facts seems like low-hanging fruit, but here we are: Lethbridge Collegiate Institute’s tackling sled is a moose named Pierre.