Last year, with the #92 jersey yet to be assigned, we gave it to today’s honoree as he’d yet to receive an official number. Man, we nailed it. We’ve got 92 days until kickoff and the #92 jersey belongs to exactly who it should—Michael Callahan A 3-star prospect who played both DE and TE for his Yorba Linda squad. The 3-year letter-winner averaged 4.3 tackles per game over his career with 21 tackles-for-loss and 12 sacks. He was rated #28 on OCVarsity’s “Hot 150” list after a big senior season that saw him record 69 tackles (yes, yes...I know), with 11 TFLs, 2 sacks and 7 quarterback hurries. Callahan fielded offers from Utah State, Air Force, Brown, Columbia, Cornell, Dartmouth, Harvard, Hawaii, Pennsylvania, Princeton, San José State, and Yale. That’s a lot of Ivy League offers (sorry, wasn’t talking about you, SJSU), but as we know of Highlanders—there can be only one.

Does he want wingy? PROBABLY. 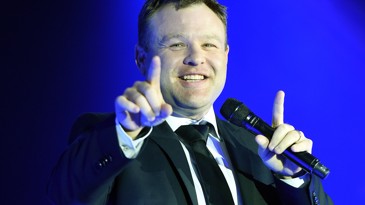 Maybe this one specific picture of Frank Caliendo

I’m not sure how exactly I got 4 fresh D-lineman for my first four countdowns, but here we are and here we go. Callahan, in my estimation, is a near Chase Hatada clone. He has a very similar body type, overall athleticism, versatility, haircut, and probably at least 2⁄3 same DNA. Given that Hatada strongly came into his own at around the midpoint of his career gives me a lot of hope that Callahan will have a similar career arc. Actually, scratch that—I hope he has an even better career arc...the Broncos lost tonnage on the D-line and will need some of the youths to step up early and often. I fully think Callahan can be one such youth and will need to help the Broncos establish a solid new rotation after the oft-mentioned losses of mssrs Moa, Fesili, Locher, Weaver, Lui, and of course Hatada. Of course, Callahan is likely to be more at an end position rather than the interior, but his added bulk definitely gives him the hybrid chops to play a 3-tech or stand up edge rusher. We’ll get to the STUDs and other DEs further on in the countdown, but suffice to say we’ve got decent enough depth but not a ton of proven playmakers...yet. That all changes when the rubber meets the...turf.

Re-tweets are more his speed, but he’s here if you want to throw him a follow (@mikecalllahan)