Share All sharing options for: Force to be reckoned: Boise State at Air Force game preview

1. No tricks, all treats

Boise State is no stranger to playing on Halloween—it’s just not usually their second game of the year (and in a historically spooky setting). HOWEVER, the Broncos have won their last two Halloween matchups—a 45-7 drubbing of San José State at home in 2009 and a road victory over UNLV in 2015. Will the Broncos get their treats in a tricky environment? Will some cadet be wearing a shirt that just says “2020...the scariest thing I could think of”? All signs at the moment point to ‘yes’.

There aren’t really traditional redshirts at the Air Force Academy, but they do have this little provision called a “turnback” that they can employ in the case of say...a global pandemic. This allows the cadets to enroll a bit later than usual, but also takes them off campus, so they are not available...a whole buncha cadets did just that and AFA now is as fresh-faced as can be on the defensive side of the ball. Oddly enough, that’s not really where they struggled last weekend against the Spartans.

Boise State has generally owned most of the MWC since the dawn of time, but Air Force has been one to give the Broncos fits with both schools owning a 3 year win-streak over the other. The Broncos got their 3rd straight win in the series last season...can they be the first team to win four? Please? 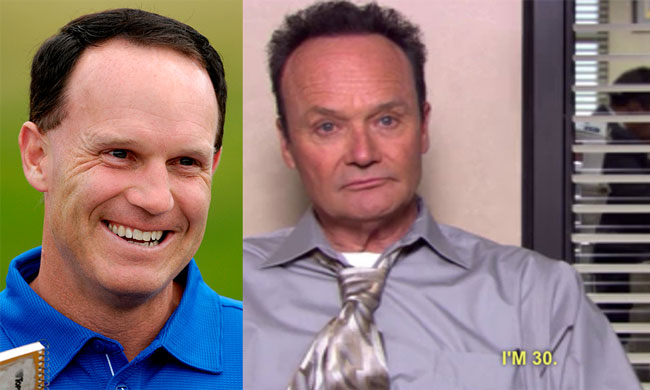 Honestly, this is tough with Air Force, as all the cadets are very clean cut and snazzy in their uniforms...the best I could do is the Stefan Urquelle vibe of RB Joshua Stoner

Yeah, Air Force stretches the definition of “quarterback” with regularity, but if someone is going to sling it out of the backfield, Daniels is likely to be the guy. Accuracy isn’t his strong suit, with 50% completions for the year...but Air Force has an annoying way of getting guys wide open in space, so if you don’t put him under duress, he’s more than capable of finding a rando fullback 40 yards downfield.

The 6’5” 285 lb senior is large and in-charge...and also looming rather large on the Falcon defense, as he currently leads the team in tackles with 13 and also has 1.5 sacks for the season. Sure, he sounds like a guy that owns a machine shop, but this dude ALSO knows him some football.

Fullbacks don’t usually lead their team in rushing but (extremely Cris Collinsworth voice) HERE’S A GUY... Jackson leads all Air Force rushers (so probably like 25 guys) in rushing for the year with 178 yards (but no TDs...yet). Jackson opened up the year huge with 118 against Navy, but fell back to earth a bit against SJSU with just 60. Still, he’s averaging over 5 yards/rush, and at 6’3” 200 lbs, ya gotta wrap up!

Palm has the hot PALM as it were with an INT and PBU last week against San José State, but he also has been lending a rather large palm (sorry, I can’t get off that) to the defense as a whole with 11 total stops on the year. He and Khalil Shakir are likely to meet.

Well, all of the turnbacks obviously but also last year’s main signal-caller Donald Hammond is also gone. Hammond rushed for 13 TDs last season and threw for 13 more. A small loss, it is not.

Broncos “ground” the Air Force. Get it?