Share All sharing options for: Know your enemy: Marshall edition

The Broncos home opener is tomorrow evening and we’ll know then whether it’s a “buy” or “sell” on the hype the team is already generating. One thing worth hyping, however? Useless facts about our opponent. For that, I’ve got you covered.

10) Huntington, West Virginia (“almost heaven” as one bard described it) is the modern-day (and not-so-modern-day) home of Marshall University. Huntington was first established in 1775 as a small settlement called Holderby’s Landing. Knots Landing was just up the road a spell but far too fraught with murder and intrigue to really last more than 10 seasons. Collis P. Huntington, a bigwig in the railroad industry founded the actual town of Huntington along with pal Delos Emmons, but apparently Emmons drew the short straw and Collis got his name on the marquee. As you’d imagine, the town was intended to be a hub for the C&O (Chesapeake & Ohio) railroad line (of which ole Collis had a sizable stake) and the city was incorporated in 1871. Choo choo!

9) Marshall University was founded as Marshall Academy in 1837 by residents of Guyandotte and the surrounding area. The push for the university was led by a local attorney named John Laidley, who in the ultimate bro move, suggested the institution be named after his pal John Marshall. I suppose it helped (some) that Marshall was the fourth Chief Justice of the United States, but I’m sure Laidley included some anecdotes about how Marshall totally shut down that bar in Huntington one night. John Marshall (who’d died two years before Laidley’s homage) was the longest serving Chief Justice in U.S. history and while you’ve probably never heard of his earlier indie stuff, he had a big hit with Marbury vs. Madison...a decision still getting significant airtime today (and usually the correct answer to any multiple choice question in high school level government classes). 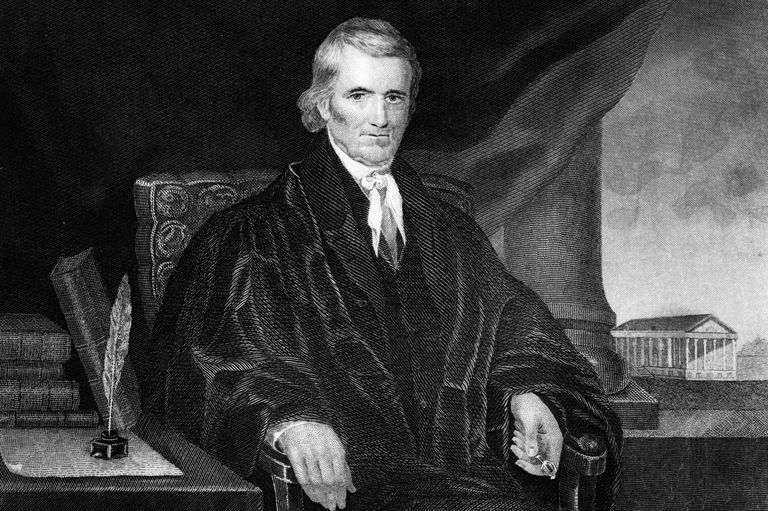 “I cannot tell a lie” (or something)

8) Marshall played their first season of football in 1895, without a head coach and with an ominous black and blue color scheme. The team might have been referred to as The Indians at the time, but as you’ll see, they’ve been called a LOT of things throughout their history (even “late for dinner” as dad joke bylaws force me to disclose). The team was 0-1-1 their first season, but had no coach to yell at them about it, so they sunk to 0-3 the following year. In 1898 the team improved to 4-1 which pleased No Coach to No End.

7) Every team generally has an epic beatdown (either given or received) in their history and Marshall is no different. Their uncouth football moment came in 1916 when they faced off at home against Kentucky Wesleyan and did not relent until they’d put up 101 points to Kentucky Wesleyan’s...zero. Maybe coach Boyd B. Chambers was a little frustrated about the team’s 1-8 record the previous season, or maybe he was just really hated Methodists. Either way Christian mercy was not shown that day. It was one of only three games that season where Marshall cracked the 20-point threshold. Starting to think Kentucky Wesleyan left some of the team at baggage claim.

6) Apparently, one of John Marshall’s favorite pastimes (aside from Marburying the heck out of some Madison) was a game called Quoits. In Quoits, a ring of metal, rope or rubber is tossed toward a spike (or “hob”) for “the purposes of merriment”. If it sounds like ring toss or horseshoes, you are correct. Anyway, since John Marshall had such an affinity for the hot ring tossing action, the game is widely played at Marshall (especially during Constitution Week). They even have their own on-campus quoits pits (slightly less compelling than tar pits). Like in horseshoes...getting the ring onto the hob is called a “ringer” and not—to my disappointment— “quoitus”.

5) In late January of 1937, the Ohio river flooded its banks in a BIG way and devastated communities from Pittsburgh to Illinois. Huntington, West Virginia was not spared the flood’s wrath and the town and campus found themselves decidedly more Venetian than they’d wanted. Several campus structures were heavily compromised and millions of dollars of damage was done to the town (probably about $7B worth of damage today). Seeing as it was already the Great Depression, and selling pencils and stealing cooling pies from windowsills were the most popular professions, this was not a net positive for the town. Since 1943, the town has been protected by a flood wall and it consists of much more than some Dutch kid sticking his finger in it.

4) Marshall athletics teams weren’t officially known as the Thundering Herd until 1965, when students finally put the nickname debate to bed with a simple majority vote. The name had first been used by Herald-Dispatch sports editor Carl “Duke” Ridgley and referenced a 1925 Zane Grey novel (later a major motion picture!). I don’t know what the team UNofficially went by all those years, but a few nicknames that got ran up the flagpole during that stretch were Normalists (Marshall was a teaching college way back when), Boogercats (I have no earthly idea), Big Green (discriminatory of the color blind community), Green Gobblers (uhhh...), Rams, and Judges (flaunting that Chief Justice cred).

What exactly do we have a herd of, exactly? Well, bison if you must know...and their bison mascot’s name is Marco. Some say the name is a mashup of the school’s earlier name, “Marshall College”, but I think he’s really just a first-generation Italian-American bison. 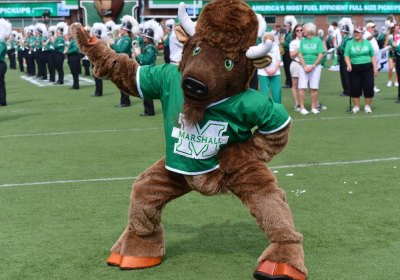 3) Marshall is coached by one Doc Holliday (not the tubercular gunfighter, as far as we know) and have been since 2009 when he took over for Mark “Curly Bill” Snyder. Allow me this moment to segue into the life of that other Doc Holliday since I’ve seen the film Tombstone approximately 58 times (Dana Delaney was a real liability). John (our WV ballcoach is also named John...go figure) “Doc” Holliday was born in 1851 in Georgia, earned a degree in dentistry at age 21 and set up practice in Atlanta, but soon was diagnosed with tuberculosis (sometimes called “consumption” and recently “vape lung”) and decided to move to a drier climate and trade in his pliers for poker chips. On a swing through Texas, he befriended Wyatt Earp (who started out not as a lawman, but a bouncer and pimp) and travelled with him around the Southwest—eventually landing in Tombstone, AZ. The rest, as they say, is history...muddy history, but history nonetheless. The OK Corral stuff happened pretty much exactly like the movie suggests, although Holliday probably didn’t kill Johnny Ringo, nor did he play Iceman in Top Gun.

2) One player in Marshall football history was so dominant on the field, his name has become a verb—meaning, “to be beaten soundly in the contest for the football”. No, I’m not talking about “Leftwich’d”...I’m talking about Randy Moss, who was “Mossing” guys at Marshall before he Mossed ‘em in the NFL. Moss was one of the top recruits in the country as a high schooler and originally signed with Notre Dame, but an unfortunate incident his senior year led him to be expelled from DuPont High School and Notre Dame subsequently denied his enrollment. Moss transferred to Florida State, but because he’d already signed a letter of intent, had to redshirt the ‘95 football season and then tested positive for marijuana as a redshirt freshman, thus violating the terms of his probation stemming from the incident at DuPont and he was dismissed from Florida State as well. With few options left, Moss transferred to Marshall, which was about an hour drive from his home, and since it was an FCS school, his eligibility was immediate. This was the move.

As a freshman, Moss set FCS records for touchdowns in a season (28) and most receiving yards by a freshman (1,709). To boot, he was the leading kickoff returner in the FCS with a 34 yard return average. The Thundering Herd went undefeated his freshman year and won the National Championship. Moss had four TD receptions in the title game. As a sophomore, Moss racked up 1,820 receiving yards and 26 TDs en route to the Biletnikoff Award and a Heisman ceremony appearance (Marshall transitioned to FBS status in ‘97). You pretty much know how things went from there—first round draft pick, Rookie of the Year, 6x Pro-Bowler, 4x All-Pro...oh yeah, and a Hall of Famer. In the fight for superlatives, Randy well and truly Mossed his opposition.

1) You knew I was going to have to talk about this one, but I wish I didn’t. On November 14, 1970, Southern Airways Flight 932 was carrying 37 members of the Marshall football team, 8 members of the coaching staff, 25 boosters, and 5 members of the flight crew back from a game at East Carolina when it crashed into a hill short of the Tri-State Airport and killed all 75 people on board. The crash nearly (and understandably) led to a discontinuation of the football program, as a bulk of the team and coaching staff (including head coach Rick Tolley) had perished in the disaster, but Marshall students and fans convinced president Donald Dedmon to reconsider and he hired Jack Lengyel to rebuild the team for the very next season.

Lengyel recruited athletes from Marshall’s JV team as well as walk-ons and athletes from the baseball and basketball teams to rebuild the devastated football program in time for the ‘71 season. The Thundering Herd went 2-8 in Lengyel’s first season at the helm (and 9-33 in total), but 2 wins less than a year after an unspeakable tragedy is a miracle in and of itself. It took a solid decade for Marshall to find its footing again, but since that fateful November day, they’ve won nine conference championships and two national titles (‘92 and ‘96). If that’s not a “down but not out” story, I don’t know what is. Each year, on the anniversary of the tragedy, the water in the Memorial Fountain on campus is turned off, and only turned on again come spring.

“They shall live on in the hearts of their families and friends forever, and this memorial records their loss to the university and to the community.”