Just 56 days left until kickoff...might as well take a gander at the Bronco with the matching 56 jersey—Casey Kline 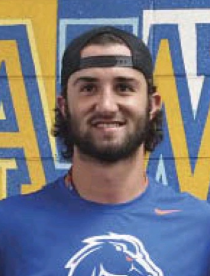 The Broncos had a lot of big “gets” in the 2019 class and Kline was most definitely one of them. As one of the 4-star signees to the class, Kline helped the Broncos cement one of the (if not THE) best recruiting classes in G5 history. Kline was a (very) early commit to Arizona, but backed off his pledge and learned to love again once the Broncos got involved with his recruitment. ESPN rated Kline as the #19 OLB in the nation and 247Sports had him just one slot lower at 20. Kline was named to the 2019 ESPN300 and Rivals250 lists and was considered the 46th best overall prospect in the rather large state of California. As a senior, Kline played both ways and recorded 68 tackles (10 for loss) and 6 sacks in an injury-shortened season, and also racked up 309 passing yards, 558 rushing yards 8 total TDs. Kline chose the Broncos over offers from Arizona (obvs), Oregon, Oregon State, UCLA, Utah State, UTEP, Washington State, and Yale. Check out the do-everything Kline in action below and do your best to hold off the Leighton Vander Esch comparisons.

For the record, I was thinking of the hockey mask guy from Teenage Mutant Ninja Turtles...not the railroad song guy. 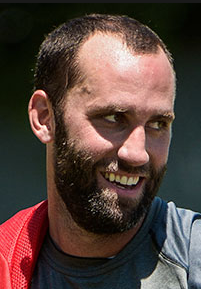 Consensus four-star prospect as a senior at Brawley High School. Top-20 OLB rating by ESPN and 247Sports, as well as an ESPN300 pick. 68 tackles and six sacks as a senior. 26 tackles and a sack as a junior. Nearly 2,000 all-purpose yards and 18 TDS as a junior and senior. Two-straight appearances on All-Imperial Valley team. Two-year captain.

Kline has the highest of ceilings and is going to be a great add for the Broncos...we just need to get him to 100%—which in Spring Ball...he certainly was not. In fact, Kline had injury-shortened campaigns as a junior AND senior, so the Bronco coaching staff needs to make sure they don’t try to rush the talented defender back to the field. From all accounts, Kline was a “partial” participant in Spring Camp...but that’s still more than most of his fellow true freshman, and he’ll probably be ready to go once Fall Camp commences, but exactly where he’ll line up will largely dictate whether he’ll be needed.

Broncosports.com has Kline listed as an OLB (which is primarily where he played at Brawley), however...an interesting tweet from coach Spencer Danielson late last month indicates that Kline may be prepping for some time at STUD or defensive end. Since the publicized move to a 3-4 defense (at least when Avalos was still around) could render the difference between an OLB and a STUD negligible, I think the Broncos numbers are a tad more thin at LB (hence the late signing of transfer Josh Booker-Brown). Kline has the football IQ, the size, and the pedigree to be another Leighton Vander Esch type player, but consider that LVE had just one real season as a starter before becoming a first-round pick and you’ll realize Kline’s clock doesn’t necessarily have to start immediately.

Yes, and a #humblebrag about parallel parking never hurt anyone.

I really do go crazy at parallel parking