I hope everyone had a great 4th and still have all their fingers. Today let’s celebrate our independence from tiny nose tackles by highlighting a gargantuan one—Emmanuel Fesili Along with De’Andre Pierce, he was enamored with Boise State after a visit and (silently at first) joined the blue and orange flock herd. A 3-star recruit, the mammoth tackle helped take LBP to the Pac-5 semifinals in 2014 and earned All-CIF Southern Section Pac-5 Division honors as a senior. Emmanuel was named to the Long Beach Press-Telegram’s 2015 Dream Team after a 39 tackle year (8 tackles-for-loss). As a junior, Fesili had an unheard of 97 stops, with 3 sacks and 10 tackles-for-loss. He passed on offers from the majority of the MW, including Nevada (yes), Fresno State (nice), and Utah State (sweet) to name a few.

I’m harkening back to Fesili’s sophomore campaign for this one. He never physically harmed me then, so I’ll assume this one is still cool. 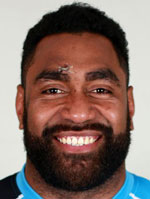 Fesili is a senior. How?! Why can’t space-eating (and Chuck-a-Rama eating—he’s up six pounds) last forever? My kingdom for Chase Baker, Fesili, Billy Winn, and Mike Atkinson to play on the same line...running backs would have been mashed through a sieve. At any rate, we’ve got one more season with the big Poly from LB Poly and we should all make the most of it. The Broncos have some good young (and big) talent coming up with guys like Scale Igiehon and Keeghan Freeborn, but Fesili and his 24 career game appearances will be vital to the Broncos success this season for the depth alone.

The Broncos are deeper at nose tackle than they’ve been in some time, with Fesili, Lui, Igiehon, and Freeborn. Fesili and Lui are the two seniors of the group, but I don’t know if that will be the real pecking order. Right now, I expect Fesili to be the third man in that rotation, with the redshirt frosh Freeborn slowly coming along with some reps as well. Igiehon had a fantastic freshman season last year and former walk-on Lui is a real game-changer when healthy, but it takes a village to get the D-line through the season intact and Fesili’s importance in that respect cannot be understated. Starters are fluid on the line and Fesili is going to get his reps. He and Lui’s leadership will also be of major importance this season to make sure the line coalesces like it should.

Yes, and he was very pleased with the news that David Moa was the new starting QB.

Earlier in his career, Fesili took the “nose tackle” moniker too seriously and 3 opposing O-lineman had to have extensive plastic surgery. He did fix one guy’s deviated septum, though.