Guys, I can’t believe my kids have less than a month till their back in school (Woooo!) let alone we only have 38 days until kickoff. It’s getting so real. Today we are profiling a guy looking to see some time on the field—Demitri Washington 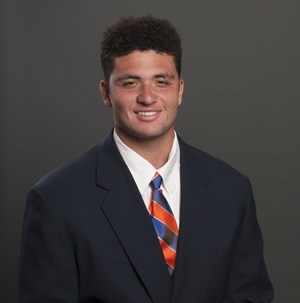 He had visited Boise State in the 2017 season (Troy) and decided to make his commitment. The dude had quite the offer sheet coming out of Santa Fe Christian. He had offers from Pac-12 schools Arizona, California, Washington State. He had some MWC offers in Air Force, Fresno State and _yoming. He had some Ivy League offers too! Brown, Columbia, Cornell, Pennsylvania, Princeton, and Yale. Gotta say: that’s impressive. You know who had interest but made no formal offer? Utah State. Makes you go hmmmmmmmmm, sometimes.

For the Broncos he sat out last year on a redshirt. In high school he had 45 tackles (29 solo), 7 tackles-for-loss, 10 QB hurries and five sacks on the defensive side of the ball. Can’t wait to fill this up with some Bronco stats.

The defensive line is going to be the biggest strength for the Broncos so it will be interesting to see where Mr. Washington fits in the whole rotation. When he landed at Boise State he was a “good get” with a whole lot of upside. While he didn’t get a chance to rotate in for his four games last year, he at least had the chance to develop behind the MWC Preseason Defensive Player of the Year. If we look very specifically at the STUD situation for the Broncos they are going to be just fine (barring injuries of course). Washington is going to see his fair share of playing time, but considering Sam Whitney and Curtis Weaver in front of him, it’s going to be in a reserve role.

Just learned how to swim today thanks @CoachHarsin

It’s a known fact that Jupiter has 67 moons (well, it’s known now). Washington was going to be the 68th but then he found out there was no In-n-Out in space and politely, yet sternly, declined.