Today’s entrant doesn’t actually have no. 86. So Mr. Collingham is here for two reasons: 1) 86 is currently vacant, so we needed someone to fill this spot; 2) the no. 5 is double-booked (Evan Tyler). And since Mr. Collingham is (now) a TE, being in the 80’s isn’t exactly much of a stretch. So, without further ado,—Garrett Collingham 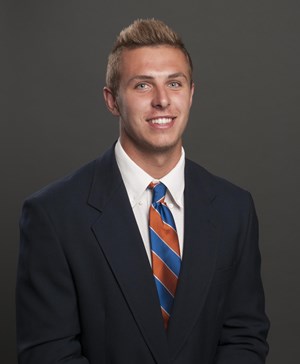 He was a walk-on who eventually earned himself a scholarship. These are always pretty great stories and so it’s cool to see a local kid being able to do it.

Casey went with this last year so I figured, sure.

There are only six TEs on the roster. For some reason I didn’t realize that. Collingham found his niche in this group last year after bouncing around the roster in different positions. He should see some decent time as a pass-catching option for whoever is slinging the rock. At 228 he doesn’t seem to be too primed to be a blocking-TE but I can only assume he had to make sure he could block to ensure that scholly. At any rate, look for Mr. Collingham to see a decent amount of time on the field.

Nope! Which means his life is probably fuller because of it.

It is a widely known fact that Snow Leopards cannot roar. But that’s because Mr. Collingham has kept it all for himself.