Just like those construction paper countdown chains to Christmas from grade school, the OBNUG countdown is already taking chunks out of the off-season and bringing us ever closer to actual, real football. As of today, we are at 98 days... 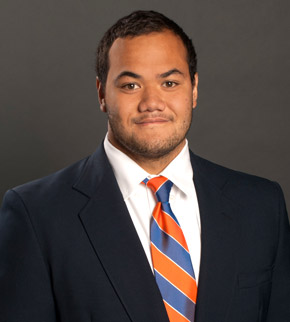 Not a lot of details are readily available regarding how Mr. Lui came to find himself on The Blue (“Extra Blue” now...or “The Grey”, as it appears to the colorblind). During his senior year in high school, Sonatane racked up 55 tackles (24 solo) and 3.5 sacks, but he wasn’t recruited. So, he went on a 2-year mission in Los Angeles for The Church of Jesus Christ of Latter-Day Saints. Apparently Lui got wind toward the end of his mission that former defensive coordinator, Andy Avalos, was interested in securing his services as a walk-on. He took that opportunity upon returning home and the rest is history.

Not to be confused Hall of Fame jazz trumpeteer, Louie Armstrong, Sonatane is an exceptional defensive lineman at a major college football program. This means that, biologically, his limbs have more in common with an oak tree than another human. So, he has much more than just strong arms. He is regularly tasked with rendering his frame as immovable as possible in the face of one or more other 285+ pound people and is able to do so quite successfully. He is very, very strong. In the words of those familiar with the ways of the iron, Lui “doesn’t skip leg day”.

While it might be tempting to showcase an interaction Lui had with a young fan in Georgia or even his off-season acquisition of a wife as “career highlights”, the reality is that Sonatane Lui is also a highly productive football player on the actual field. Since he plays on the interior defensive line, Lui doesn’t necessarily rake in measurable statistics, but the man impacts football games. From pressuring quarterbacks, to stuffing the run, to eating up blocks, Sonatane developed into an instrumental piece of the Boise State defense last season. Statistically, his career numbers are 54 tackles (24 solo), to go along with six TFL’s, three fumble recoveries, and a half sack.

Lui is the quintessential Bronco success story. He wasn’t recruited out of high school and didn’t lift weights at all on his mission, so he had to work extra hard and fight his way to a scholarship after initially walking on at BSU. While previously used in more of a rotational role, 2018 was the year when Sonatane really broke out as an invaluable member of the Boise State defense. Bronco Nation held its collective breath when he suffered a leg injury last season and was out for a few games, and for good reason. When healthy, Sonatane is one of the better interior defensive linemen in the conference. That said, unless Broncosports.com is incorrect, Lui has trimmed down his playing weight substantially. This hints that his role in the Bronco defense might require the use of his smarts and talent, but in a smaller and more explosive frame. With a new defensive coordinator, a healthy Moa, and an ascending talent in Scale Igehion, it will be interesting to see how the the middle of the d-line will be utilized in 2019.

Affirmative. And very supportive of fellow, under recruited athletes, at that.

Signing Day Once again! To all my fellow no stars, the come up starts now.✊ https://t.co/NGgKXZ1iXF

Off the field, Sonatane is known as a singer and a musician. What is less known is that ala Ron Swanson/Duke Silver, Lui moonlights in disguise as one of the Jonas Brothers. The original Joe Jonas was lost in a tragic hair combing accident.