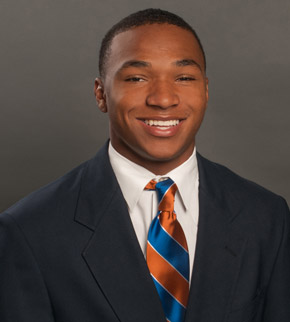 Well, he took the express lane, that’s for sure. The 3-star cornerback was rated #11 in the west at his position by Scout when he committed on my birthday last year (August 15) and within a couple of months he was on campus and ready to contribute. As a junior and a senior at Newbury Park High, Evans garnered All-Camino League honors by locking folks down. His senior season, he hit for the DB cycle by recording 38 tackles, 2 INTs, 10 pass breakups, one fumble recovery, and a blocked field goal. Evans chose the Broncos over offers from Hawaii and Nevada.

Could refer to him being on one or an affinity for Biz Markie...haven’t decided yet.

The make up of the corner chart looks a lot different this year and it has nothing to do with graduation. Last season, Mike Young and Reid Harrison-Ducros were considered locks to round out the (usually) 4-man rotation, but RHD up and transferred to Duquesne after an unheralded walk-on (Avery Williams) started taking reps, and JuCo transfer Mike Young left the program after living in the doghouse after a DUI arrest. So now, we’ve got Tyler Horton and Avery Williams as the top two on the depth chart, and if the MWC media days chart is to be adhered to, Jalen Walker (who started the Vegas Bowl in Horton’s stead) and RS frosh Jermani Brown are next in line, respectively.

Of course, there is new blood that has yet to be given a long look...guys like Chris Mitchell and Tyric LeBeauf—so along with Evans and Robert Lewis, that’s pretty much your CB pool for the foreseeable future. I’m not sure if Evans cracks the regular rotation quite yet, but I think he can make some noise on special teams...absorb the defensive playbook and make headway next season with Horton having moved on to (hopefully) the NFL. I still like what this kid brings to the table and hope that he finds his niche. Remember, he’s just a freshman, but so are several other prospective starters in the secondary. Should be some interesting races for PT coming down the pike.

Yep, but he’s got one of those non-embeddable accounts. Still, I think he has some insightful tweets, so you oughtta give him a follow if you’re on the twitter machine (@MarquesEvans)

Evans chose the number 13 because he’s not superstitious...but he’ll readily admit that he is a little stitious.