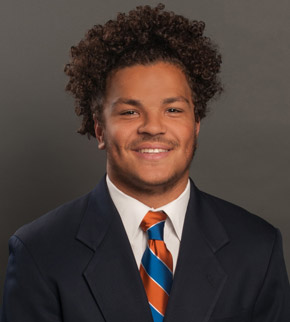 He also came to the Blue with one of the more unique endorsements boasted by a Bronco. This one from his godfather:

I feel like every nickname involving someone whose name is “Happle” will generally result in some pairing with the popular beverage in the first wave of PUNishment. I didn’t even bother to wait for the second wave of inspiration to come though because...it’s literally his Twitter handle.

Jordan made it into thirteen games last year and was able to put up some decent stats as a rotational safety, coming up with 15 stops (career-high of 5 at Air Force) and an interception in the bowl game against Oregon. Who, again, let the world not forget...we have NEVER lost to. To put it Blountly. 3-0! ✊✊✊

2018 will likely look much like 2017 did at the safety position. Count on Nawahine and Pierce to be the starters, but with a healthy dose of Happle, Tyreque Jones, and possibly a healthy Evan Tyler mixed in. Happle made himself capable of seeing the field for 13 games last season, so with another year of seasoning, it stands to reason that his snaps will increase.

Yes, but primarily as a prolific re-tweeter.

Jordan Happle turned down offers from Eastern Washington, Montana State, and the University of Hawaii to come to Boise State. What’s less known is that he also spurned the invite of his godfather, Mark Wahlberg, to be the voice of Optimus Prime in Transformers: Age of Extinction. His reason? Deference to Deion Sanders. In his words: “Only one defensive back can ever be Prime.”