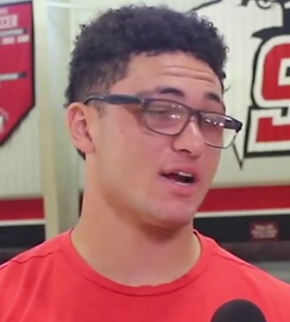 One of the many prized recruits of the 2018 recruiting class, Washington visited for Boise State’s 2017 home opener and decided he’d seen enough. This dude did it all for Santa Fe Christian...playing quarterback, defensive end, and—terrifyingly—running back. Before he tore his labrum mid-way through his senior year, Demitri had amassed 45 tackles, 5 sacks, and 10 quarterback hurries. On offense, he racked up 507 yards passing, rushing, and receiving. Demitri picked the Broncos over offers from Arizona, Cal, Washington State, San Diego State, Air Force, Fresno State, Navy, UNLV, Wyoming, and all eight Ivy League schools...wow.

I mean, it’s right there in his name...you just gotta look for it.

Kinda like Winston Venable and Ricky Tjong-a-Tjoe spliced their DNA. 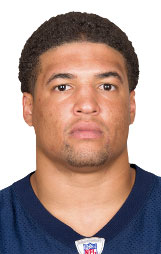 Demitri looks like he’ll be a good one for the Broncos, but I think if he plays this year, he’ll owe a lot to the new redshirt rules that allow incoming frosh to play up to 4 games without losing their shirt over it. The Broncos are just stacked this year at the STUD position and unless you see another injury (Frazier, Whitney, and Kelemete—who hasn’t played yet—are somewhat injury-prone), I think there’s a good chance he redshirts.

Frazier and Weaver alone are probably good for 20 sacks this season and Whitney looked like our best run-stopping STUD before he went down with his injury last season, so the Broncos are locked and loaded at the position more so than they have been in a few years. Add Aisa Kelemete to the mix and you have a formidable top 4, so bringing Washington along slowly makes a ton of sense for the Broncos. All that said, Washington has the size to compete right away and the frame to get even bigger. If he does manage to crack the rotation this season—look out, this kid could be a wrecking ball.

Legend has it that George Washington chopped down a cherry tree as a boy. Well Demitri Washington has similar lore in his childhood, but instead of felling a cherry tree, he knocked down a spruce...and instead of a hatchet, he just sort of leaned on it.