We’re almost to the midpoint of the countdown. Time flies when you’re having fun. Today, we’ll look at #51 on the Boise State roster—Daniel Cantrell 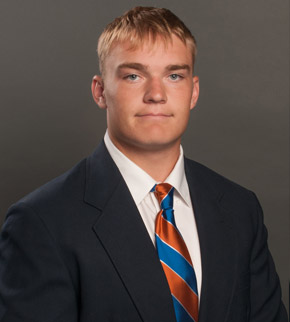 Cantrell came to the Broncos as a preferred walk-on (or PWO if you love acronyms as much as I do). He was a standout footballer at Boise’s Bishop Kelly High School, where he played linebacker and was rather good at it. As a senior, Cantrell was named the Southern Idaho Conference (SIC...yessss) Defensive Player of the Year after making 133 tackles, 8 sacks, and an INT. As a junior, he made the All-SIC second team as an offensive lineman...if you are under 220 and can make an all-conference team as a lineman...you got something going for ya.

A bit like the baby giraffe when he was a real baby. 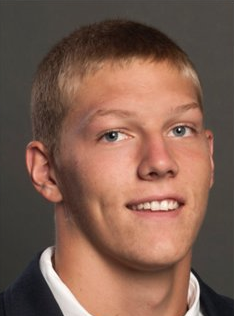 Named Boise State’s Offensive Scout Team Player of the Year after 2017 season. Named member of USA Football Under-18 National Team. Name 4A SIC Defensive POTY as a senior. Named to offensive and defensive all-conference first team as a senior. Landed spot on 5A All-SIC Offense 2nd team as a junior.

Cantrell has been a mystery wrapped inside an enigma inside a soft shell taco—a double-decker enigma, if you will. The talented walk-on was highly touted in the region as a defender as a prep, but walked-on as a long snapper. Then, with a full offseason of yours truly speculating that he’d earn a scholarship and his playing time as a snapper, ended up earning OFFENSIVE Scout Team Player of the Year honors. This honor, of course, often goes to skill position players on offense and if Cantrell was staying at snapper, he’d have probably earned the honor on special teams. It was a head-scratcher...that is, until spring camp, when Cantrell donned the #51 jersey and joined the somewhat dwindled ranks of the tight ends. We all got that one wrong, but if Cantrell has the chops at TE (and at FB, it’s been rumored) to earn those scout team honors, there’s a good chance he’s in it for the long haul.

The departures of Jake Roh and Alec Dhaenens as well as the medical retirement of Jake Knight has left the tight end group rather low on experience, so it’s anybody’s guess who asserts themself as the alpha tight end in 2018. Sophomore John Bates seems poised for a breakout season and Chase Blakley had a great start to his 2017 campaign before being sidelined with an injury, so those two are your best bets when it comes to the receiving TEs. Matt Pistone is a devastating blocker and Collingham has your prototypical size. Then you’ve got JuCo walk-on Cody Shoemaker, Cantrell, and highly-touted Tyneil Hopper and Cole Ramseyer joining the ranks since last season. Bodies are there (and not hitting the floor), but the catches aren’t. That’s obviously going to change this fall, so just cross your fingers that some of these playmakers emerge. One would think that your Offensive Scout Team Player of the Year will be right in the thick of it.

Yes, and he’s actually much, much taller than you’d expect.