Just 84 days until football season begins in earnest, but that number is currently unassigned on the Bronco roster, so today we’ll look at a guy that’s double-booked at a different number (31)—Justin Collins 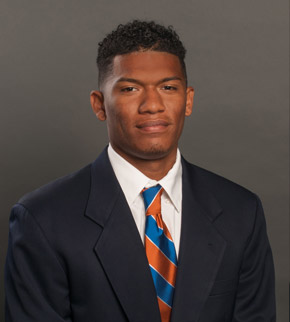 Walked on...seemingly out of the ether, but actually out of Long Beach City College (clearly, well qualified to represent the LBC...C). Collins was probably a more accomplished track star in high school than on the football field...or at least had more to show for it, as he was the 2015 CIF state champion in the 300m hurdles. He was primarily a quarterback during his prep career also, which given his smaller size, probably could account for a lack of offers even though he didn’t lack skill. At LBCC, Collins played just one season—hauling in 9 passes for 94 yards and a TD and was used pretty heavily as a kick returner—where he tallied a 25.1 yard return average. 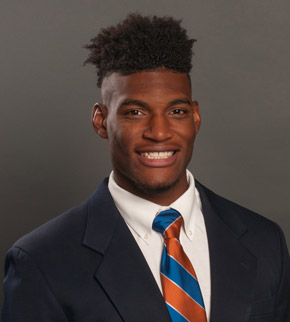 I didn’t have to go far. He bears a passing resemblance to Bronco SLB Desmond Williams.

This is going to be one heck of an interesting year for the Boise State receiving corps. In the last two years, we’ll have lost two all-timers at the position (Thomas Sperbeck and Cedrick Wilson), but the outlook for the unit as a whole seems to be the highest it’s been in some time. Octavius Evans is the most likely candidate for a breakout season, as the rising sophomore had a fantastic spring as a follow-up to his potential-laden true frosh campaign. Of course, then you’ve got seniors-to-be AJ Richardson and Sean Modster in line to have big years as well as the other true soph CT Thomas.

Damon Cole is coming off a redshirt and 4-star Khalil Shakir and almost-4-star Stefan Cobbs will arrive in short order. John Hightower is a big-bodied JuCo product that coaches are hoping has a little of that Wilson magic, and then speedster Billy Bowens and the lanky Cameron Thomas join the cast as well. The roster is absolutely stacked with everything but experience (outside of Richardson and Modster, of course...but even they have been role players for the most part, and I didn’t even mention Akilian Butler, whom the injury bug has had it out for). All this brings us back to Justin Collins, who you wouldn’t think would have a role in the Bronco offense with all the returning and incoming talent...and yet Collins has impressed in scrimmage situations and just might carve out his own niche.

To be honest, I hadn’t even heard of Collins until he was BMOC at the Broncos pre-bowl “Bronco Bowl” and he carried that over into spring with a few more highlights. Collins clearly has the skills to see the field, it just remains to be seen how much or how often. Even if Collins can’t find his way into some offensive packages, he has speed to burn and might be an intriguing prospect in the return game. In this most interesting of seasons for the receivers, Collins might be one of the most interesting adds to the roster.

Collins can recite all the lyrics to the Fresh Prince of Bel Air theme song...that’s nothing too exciting, most of us can—but Justin knows even the verses that didn’t make it to TV like the verse where Will and the cabbie get stuck in Albuquerque overnight due to a faulty water pump.