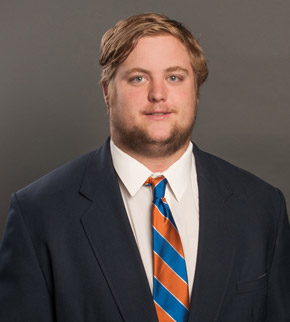 Troughton came to us as a early enrollee this spring semester, which means he got the benefit of lacing up his cleats for spring camp. Prior to joining the Broncos, Troughton was a standout lineman at Butte CC (the same college as former backup QB Tommy Stuart, and future hall-of-famer Aaron Rodgers). Troughton played two seasons for the Roadrunners and earned all-region, all-conference, all-state and All-America honors while he was there. Before joining the JuCo ranks, Troughton was a 3-sport star (football, basketball, and baseball) at Maxwell High School in California—and was an all-league performer in his final three seasons and an all-region performer as a senior. 247 ranked him the #14 JC offensive tackle before signing day and a 3-star recruit. Troughton picked the Broncos over offers from Hawaii, South Florida, and Utah State.

Prepare to get smoked vaped

Troughton and Isiah Moore were both juniors last season after transferring from JuCos and neither played a snap in 2017, but only Mr. Moore is still a junior, while Troughton will be entering his final season with the Broncos. Why? Eligibility clock. Troughton played as a RS freshman and sophomore at Butte, but obviously took his redshirt (he was an HS senior in 13-14), so that avenue is no longer available to the big guard and he’ll have to make the most of his senior year with the Broncos or take a diploma and hopefully two MWC titles as a consolation prize.

Moore was the higher-rated recruit of the two when the Broncos signed them in the 2017 class, but many thought both would play right away. Many were wrong (myself included). The Broncos lost Tercek, Hampton, and Lewis to graduation and while Hampton and Lewis started their fair share of games at center and tackle—their departures don’t necessarily open the door for Troughton’s playing time (assuming he stays at guard). What might open that door is the shuffling of some of the players that did see time in 2017. The left tackle and center positions will need filled and while we can assume that a mix of Preciado, Larson, or Harrington will fill in, it really could be anyone, and Brad Bedell might see fit to try some new combos in camp to see what kind of synergy he can find. One thing’s for sure...I’m glad we have someone like Troughton in the wings, whether he’s starting or not...it’s hard to get through the season fully healthy and having quality depth is an absolute must.

Zach owns a a 1977 Trans Am with a flame job and the words “Troutin’” stenciled in cursive on the bumper. It automatically wins every auto show it enters.