#82 will be a name that, if you don’t know him yet, you will after this season. On the docket today is Octavius Evans. 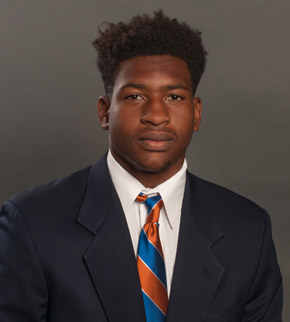 Rated as a high 3-star and the #19 receiver in Texas, Evans passed on offers from Indiana, Oklahoma State, Mississippi State and Texas Tech to be a Bronco. He was a late addition, too, committing just 3 days before signing day in 2017.

It seems to be what he calls himself, so I figured it makes sense.

Last year as a true freshman for the Broncos, Evans hauled in 15 receptions for 131 yards (an 8.7 YPC average) and 2 TDs.

After his senior season at Center, Octavius earned First Team District 9-4A and Division 1 All-District honors as a wide receiver. He also earned the MVP award as a receiver at the APEC East Texas Football Recruiting Combine. He finished his senior season with 66 receptions for 852 yards and 6 TDs. He’s also very accomplished at the shooty hoops.

Evans is in prime position going into the 2018 season. Richardson and Modster are ready to take over the reins as seniors, but outside of those two, Evans has the most experience.

CT Thomas will be in the mix with Octavius as both played as true freshman and showed plenty of potential, but of the two, Evans seems more poised to have a break-out season. That statement is based off of what he showed us at the spring game and the “closed” 2nd spring scrimmage.

Evans and Thomas will have to fend off the 5 newcomers for playing time, though. John Hightower is coming in with experience, and Shakir and Cobbs have a lot of hype. Bowens and Thomas can’t be slept on either, despite there not being as much chatter about them.

While we don’t have a lot of experience at WR, we have a wealth of talent and that will be fun to watch unfold this fall.

He is, but he mostly retweets.

Evans secret to his athletic prowess on the field is he eats a tub of Red Vines a week. Oh, and a lot of practice.