80s are winding down? What is this devilry? Today, we’ll take a look at #83 on the Boise State roster— Damon Cole 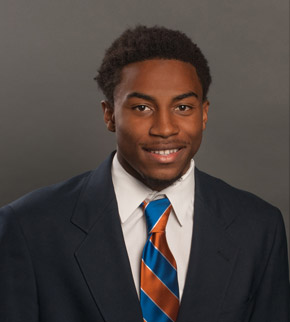 Cole slipped into the 2017 class right at the wire, committing on January 30th. At the time, he was primarily rated as a cornerback on the recruiting boards, so it was somewhat uncertain whether the Broncos were after him for his offensive or defensive skills. Turns out, we liked him as a WR and Eric Kiesau helped seal the deal with him. Cole was an All-East Bay Area First Teamer in 2016 and an All-Metro honorable mention after helping El Cerrito to the NCS Division III quarterfinals. Two other times (2015 and 2016) he was named to the All-Tri-County First Team. He chose the Broncos over basically the Mountain West...turning back offers from Colorado State, Nevada, Fresno State, Hawaii, New Mexico, San José State, UNLV, Utah State, and Wyoming.

“I asked the Broncos top receiver his name and he replied, ‘my name is Legion, for we are many’”

Ok, so maybe that Biblical exchange didn’t occur...but it could’ve, as Brett Rypien will have a TON of viable receiving options in 2018. We all know what we lost in Cedrick Wilson, but just what we’ve gained sort of remains to be seen. In short, we’ve got some serious numbers and potential at the position, but not a lot of solid data on how they’ll perform. As previously discussed, Octavius Evans is probably the odds-on favorite for a breakout year, and CT Thomas might not be far behind. AJ Richardson and Sean Modster finished 2017 in strong fashion and will provide some great senior leadership in 2018...beyond that, it’s going to be a youth movement, with any number or freshman—both true and redshirt seeing the field.

The Broncos elected to redshirt Cole in 2017 as classmates Octavius Evans and CT Thomas saw limited action. This is no indictment of Cole, because this sort of judgement call happens year after year. Remember, the Broncos burned DJ Harper’s redshirt instead of Doug Martin’s lo those many years ago...so Cole could still be a big-time player for the Broncos and his highlight tape shows a speedy receiver with plenty of moves. Still, the WR corps will bring in Bowens, Cobbs, Hightower, Shakir, and Thomas (Cameron) here in short order, so those waters will get even more cloudy. I think Cole looks like one of the better deep threats we have among the guys we haven’t seen yet in live action and I’m so curious how the two- (or even three-deep) play out that I’ve been following around some dude in a yellow hat. With Mr. Production (Ced Wilson) moving on to the NFL, this will be the year for some of the youngsters to show what they can do...and the receiving corps looks to be in great shape for 2018 and beyond.

Not the most prodigious tweeter, but he’s there.

When Saturday Night Live decided to have Matt Damon host with musical guest J Cole, the confused booking agent called Damon Cole. Unfortunately, he had a previous engagement, or it would’ve been the highest rated SNL of the last 5 years.