We’ve got 97 days until kickoff, but that number on the roster is currently vacant. Today, we’ll highlight a new Bronco who technically could wear the Chase Baker special—Keeghan Freeborn 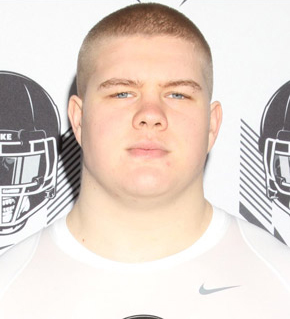 Well, he won’t have to go far, that’s for sure...unless he wants to swing through Melba on the way to Albertsons Stadium. Freeborn was a big local commit for the Broncos and a darn big commit in general. He was a two-time 5A All-Idaho honoree on the offensive line and as a senior was recognized by the Southern Idaho Conference as a first-team O-lineman. As a sophomore and junior, Freeborn found himself on the all-conference team, as honorable mention and second-team, respectively. Rated the number 4 prospect in the state as a senior, Freeborn held offers from Air Force (how you gonna fit in the cockpit, bro?), Hawaii, Idaho, Montana State, and Weber State, and thankfully chose his hometown Broncos.

Keeghan’s highlights are below...he’s on the other side of the line than you’ll be seeing him on with the Broncos, but worthwhile to see him making pancakes.

It’s his twitter bio, so I assume there’s already an affinity there. Apologies to site contributor Michael Johnson...hey, you can be a vanilla orangutan.

Freeborn doesn’t just look like former Bronco tackle Chase Baker...he plays a lot like him too, which might be why I subconsiously slated him for day 97 (which as you may recall were Mr. Baker’s digits). Most of Keeghan’s prep career was spent on the offensive line—and as an all-conference and all-state pick, there wasn’t much reason to doubt his coaches. Still, the Broncos thought that the talented lineman and wrestler was tailor-made for the nose tackle role, and looking at his film I’d have to say I wholeheartedly agree. Freeborn is strong as an ox and routinely puts opposing tackles on their backs—is it really too much of a stretch to have him flip sides and punish a few guards? I say nay!

A couple of years back, the Broncos had a real problem with beef in the middle of their interior line, but looking at the current roster along with the soon-to-arrive guys, you’ll see more beef than an Armour factory. In fact, if you just look at the projected nose tackles on the Broncos’ fall roster, you’ve got over 1,200 lbs of space eatin’, double-team drawin’ fury. This would make the average Boise State fan giddy with excitement, especially knowing what the Broncos have on the edges. I am that average Boise State fan. Here’s what we know: Freeborn, like Igiehon, has the size and skill to plop right down into the tackle rotation—whether the Avaloses-that-be choose to do so in 2018 remains to be seen. I’ve got a feeling this kid will be a good one though, whether he redshirts or not...and the Broncos depth at the moment is every bit as good as advertised.

545 wasn't a bad lift after an entire workout (I promise there are 25s on the ends) pic.twitter.com/5rJpchM0Gg

Yep, and he’s already maxing what is still a light warmup for me.

Freeborn was indeed born free, but he was raised in captivity.