And here we go. The fourth quarter of our countdown. The last 25 players we will be highlighting until the season starts. Now that we have 25 days until kickoff let’s get to know—Benton Wickersham 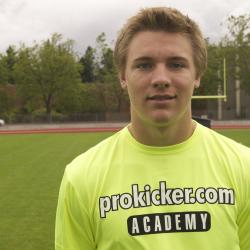 Benton Wickersham’s direction to Boise State was a difficult path. And one with a lot of adversity.

While a junior in high school Wickersham developed an auto-immune disease. His body was attacking itself!!! He was able to get healthy enough to at least stay active and play baseball.

Wickersham was initially offered a scholarship to Hawaii, while Norm Chow was still the Head Coach. Then Mr. Wickersham got injured (ACL tear). Unfortunately (for Wickersham) Hawaii had a change at the HC spot and it resulted in his scholarship opportunity to get pulled. ACL injury notwithstanding, the change at HC always results in awkward decisions and can lead to a change of overall direction. The ACL tear didn’t help that.

With the help of a few connections, he was able to get in touch with the coaches at Boise State and was offered a preferred walk-on spot. A chance. Sometimes that’s all we can ask for.

Though his last name implies fake twigs, he is solid steel as far as I am concerned.

So far all his highlights are high school related. As a junior he was the Nevada Lineman of the year. He was an NIAA Top Ten student-athlete. His sophomore season he played safety and had 80 tackles (52 solo). The dude was all over the place.

In his first year in the program, as a walk-on, he is already the backup behind Tyson Maeva in the MLB spot. The coaches, and other players, have been talking about Wickersham a lot the past couple of months and he was even calling plays on the second-team defense against the first-team offense during the spring game. The guy has the ability. He’s also physically tough given his road to just being on the team. The coaches have even acknowledged that he is a scholarship-worthy player already. Just needs to get over that hump.

Despite the rotten luck of not being able to stay healthy his last two years in high school, Wickersham has shown that he can bounce back and be productive. It feels as though it is only a matter of time until he gets his fair share of playing time and will be a great feel-good story Bronco Nation can rally around.

Mr. Wickersham is going to see some playing time in the fall. Just how much we will see.

I did not find an account for Mr. Wickersham. There could be a bevy of reasons for that.

The movie “Real Steel” is based on Wickersham. He just does not give up.