Maeva was one of three commits to verbal to Boise State on June 26th of 2015, joining DBs Reid Harrison-Ducros and Desmond Williams. Maeva was rated a 3-star by the every major recruiting service and Scout.com had him tabbed as the 9th best inside linebacker in the state of California (and 11th best in the west). As a two-way standout at linebacker and fullback, Maeva was named first-team All-San Diego Section on defense after his senior campaign. As a junior, Maeva put up 80 tackles, 2 INTs and a sack. Aside from his Bronco offer, the following scholarships were extended: Air Force, Army, Fresno State, Navy, Nevada, San Diego State, UC-Davis, and Wyoming. Those service academies really like the cut of his jib.

This works better with his last name than “Goose” or “Iceman”. 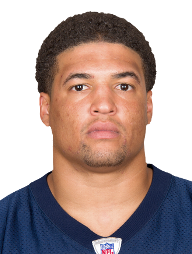 Still getting that Winston Venable vibe.

Appeared in 12 games for the Broncos as a true frosh in 2016. Scout's 11th ranked ILB in the west. All-San Diego Section first teamer as a senior.

I had a hunch that Maeva might find his way onto the depth chart last season as a true freshman, but with guys like Tanner Vallejo, Ben Weaver, Darren Lee, and Joe Martarano still in the mix, it was hard to imagine he’d have the impact he did. All told, Maeva played in 12 games for the Broncos last season and racked up 21 tackles with the lion’s share of them being solo stops. He also had 1.5 tackles-for-loss and showed some real flashes of what fans might be in for. Maeva is a solid and active tackler and has a real nose for the ball (and ball-carrier). Late in the season, it was clear that he was a major difference maker for the Broncos’ D as he came in as a reliever when injuries struck and ended up with 13 total tackles against Air Force and Baylor, combined.

With Vallejo, Weaver, Lee, and Joe Mart now gone, Maeva will suddenly find himself as one of the leaders of that defense and I think he’ll rise to the challenge and put in a solid season. I expect Maeva’s tackle numbers to triple and I think he’s your game one starter at MLB and he’ll be flanked by Des Williams and Leighton Vander Esch. Only walk-ons Solo Taylor and Joe Provenzano are listed as fellow MLBs currently, so look for some incoming freshman to possibly pad those numbers in camp (as well as possibly JuCo transfer Joseph Inda). The race for the two spot will be intense next month, but I think Maeva—barring disaster—will be the man in the middle.

I don’t know what this means. Hug your vacuum?

Most defenders spend the offseason tackling dummies, but Maeva has taken to tackling mummies—a practice that got him a lifetime ban from the Egyptian Museum in Cairo.