We have just 62 days until Boise State kicks off their season against Troy, but since #62 on the roster has yet to be assigned, we’ll highlight a so-far numberless frosh, and today’s honoree is Kekaula Kaniho 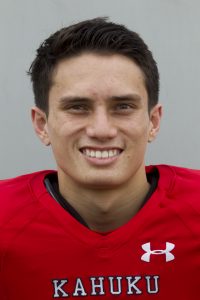 Well, he’s not quite on The Blue yet, but he will be in a few days—and all it will take is a short little puddle jump from Kahuku, Hawaii to Boise, Idaho. Kaniho was a HUGE pickup for the Broncos when he committed a few weeks before signing day (January 15th to be exact) as he is the reigning Hawaii Defensive Player of the Year...and as you all know, Hawaii produces some fantastic football talent year in and year out.

A consensus 3-star recruit and #1 rated corner in the Aloha State, Kaniho was the 2016 American Family Insurance All-USA Hawaii football team Defensive Player of the Year (that's a mouthful) as well as earning the honor from the Honolulu Star-Advertiser. He was voted the Super 25 Top Star by USA Today readers after a stellar October performance and as a Kahuku team captain, helped his squad to an 11-2 record and a spot in the First Hawaiian Bank Open Division State Championship game. Oh, and all Kaniho had to do to land all those accolades was to have FIVE pick-sixes (out of six INTs) for the Red Raiders to go along with his 26.5 tackles. Along with his Boise offer, he received scholly offers from Army, Colorado, Hawaii, San Diego State, Vanderbilt, Washington State, and Yale.

Kaniho is a self-confessed Lego collector and will also kindly ask offensive players to “lego” of his ball. 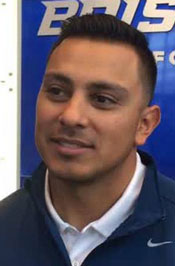 Inducted into Hawaii Hall-of-Honor in 2017. Honolulu Star-Advertiser and American Family Insurance All-USA Hawaii Defensive Player of the Year in 2016. Voted Cover2’s Manti Te’o defensive player of the year. Led squad to appearance in State Championship game in 2016 and a State title in 2015.

Kaniho was one of the later additions to the 2017 class, but man am I glad we were able to sneak him away from the islands. This kid’s athleticism won’t necessarily blow you away (although I suspect he’s a fair shade more athletic than I) but his football IQ and presence on the field are undeniable. He just always seems to be in the right place at the right time and we’re not chalking that up to luck. Kaniho pulled down six interceptions last season at Kahuku, and that’s certainly nothing to sneeze at...but returning five of those picks for scores is just unheard of. Kaniho was arguably the best defender on a Kahuku squad that many think had the best defense in state history, and with the storied history of Hawaii football, that’s another eye-popping stat. Some coaches are recalling the play of Bronco legend Marty Tadman when talking about the talented DB, and some are likening his field presence to that of another recent Hawaiian Bronco—Jeremy Ioane.

To say that the expectations for Kaniho are high might be an understatement, but it’s hard to put them into a 2017 context because we don’t know what the coaches have planned for him as far as position goes. I could easily see him playing corner for the Broncos, but safety is also a distinct possibility. Frankly, he could be the type of player like Darian Thompson that may just bounce around in the defensive secondary lending his interception Spidey sense to the mix and if he can show out in Fall Camp, we might even see him this season. The Broncos finally have some good depth at safety going into 2017, but CB seems a bit thinner...so numbers-wise, I think it might make sense for him to join the CB ranks in the interim, but he could follow the Deandre Pierce model and move around once the season starts. I don’t know if Kaniho playing this season is a slam dunk, but I think he has the chops to pull it off, so don’t blink.

He used to be (@kekaulak) but it seems that account is no longer active. Getting off social media is probably a wise move.

Kaniho could’ve had six pick-sixes last season, but on his final INT, an overwhelming sense of ennui overtook him and he could not bring himself to cross the goal line.