We are now at the beginnings of the 60s. With only 68 days until the Broncos’ home opener we are going to visit—Jake Stetz 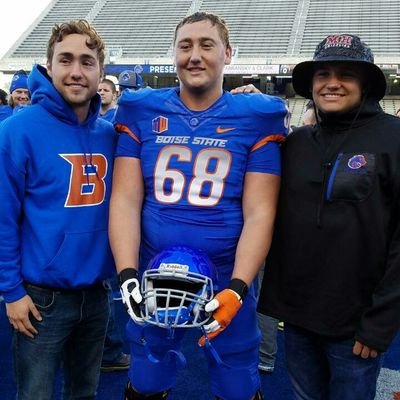 He joined the roster back in March of this year as a walk-on addition. Another body for the offensive line to rotate through.

I sure hope he likes to wear hats.

You can check his highlights:

Even though not a whole lot of info is out there for the freshman, it’s good to see another (almost) 300 lbs lineman on the roster. While Mr. Stetz most likely will not see the field this season in a real game, his contributions to scout teams, special teams, and anywhere else will help prepare the team for game time. Course, we have seen the whole “walk-on player to Super Bowl Starter/best offensive line player in a year” before. One can never rule out the prospect of a guy performing so well that he makes an indelible mark on Broncos’ lore.

He is. But only kind of. While he has a handle, he does not really use Twitter all that much. Not even a tweet for me to plug in here. If you were so inclined to follow the young man, here you go: @jakestetz

King Henry VIII would sleep with a giant ax beside him Jake Stetz sleeps ON many giant axes. Advantage: Stetz.