Happy Father’s Day, everyone (well, just the dads, I suppose)

Fans in Philadelphia are stoked today as it’s now just 76 days to kickoff. Today we’re going to roll out the red carpet for #76 on the Bronco roster—Ezra Cleveland

Coach Scott Huff was on Cleveland early and got him to commit in June of 2015...right as his recruitment was starting to take off. Cleveland had some schools take a late run at him, but thankfully for the Broncos, Huff had him riding lightning. Cleveland was a star at Bethel High on both sides of the line, and in fact was the #1 rated defensive tackle in the state of Washington as a senior after registering 41 tackles and 4 sacks from the defensive side in his final prep season. As a senior, was also named Bethel's defensive player of the year and to the Washington all-state team. Furthermore, Cleveland was named lineman of the year in his conference, first-team all-area as a DT and first-team all-conference as an OT. Cleveland even managed to squeeze his large frame into a singlet and wrestled for Bethel as well as competing for their baseball team. The big man harnessed the following offers aside from his blue and orange ticket: Air Force, EWU, Hawaii, Montana, Montana State, Nevada, Oregon State, Portland State, Utah State, and WSU. Whew. 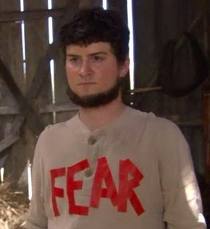 The chin-strap is reminiscent of Mose Schrute’s. Sick beets.

With the departures of Buhr, Yakoo, Adams, Yakoo, Baggett, and Averill, I can completely understand if you’re a bit skeptical about this year’s O-line contingent. However, a deeper dive reveals that maybe the Broncos aren’t in as dire straits as you might think. A quick wikipedia search reveals none of them were in seminal British rock band Dire Straits at ALL, believe it or not. Center Mason Hampton was recently named to the Rimington Trophy watch list, incoming JuCo tackle Isiah Moore was an All-American last season, and then there’s Cleveland, who took home the Offensive Scout Team POTY award at the post-season banquet even though that honor usually goes to a “skill-position” standout. Of course, there are more beefy Broncos that look like they’ll make the attrition easier to stomach, but Cleveland is definitely one to watch in 2017 and has all-conference potential in the future.

I don’t relish the idea of coming up with depth charts in June, but if you were to twist my arm (try it, I’ve been taking Krav Maga...I DARE YOU) I might just say that Mr. Cleveland could be a game on starter and if further pressed, I might just say the full rotation looks like this:

A LOT of time stands between today (Father’s Day, incidentally) and kickoff, so obviously plenty can change...but that looks like a mighty fine starting lineup to me and leaves a number of experience on the two-deep. Cleveland should take a step this year after his requisite redshirt year and it wouldn’t surprise me at all to see him become a mainstay.

They need to make new episodes of My Name Is Earl...

Yes, and he can’t quit you, Jason Lee

There’s nothing Ezra enjoys more than a good tractor pull, so if you know of any tractors he can pull please give him a heads up.