Because we can never have too much boy band in our lives, I think back to late 90’s—early 2000’s era. That’s right 98 Degrees! That’s because next up is #98 on the roster—Sonatane Lui

Mr. Lui was added to the Broncos’ roster as a walk-on. Finding a whole lot about his addition is... scarce. But Lui did serve an LDS mission out of high school and the coaches were lucky enough to add him to their roster upon his return. While in high school he recorded 55 tackles (24 solo), and 3.5 sacks for his senior year. Not too shabby. With said recruiting boon, the Broncos were able to add a solid rotation guy.

Dude has some pipes. 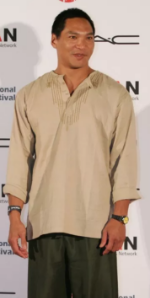 In high school: Utah 5A All-State honorable mention. Made an appearance on the MaxPreps’ Utah All-Region 3 First team.

Mr. Lui was of great value for the Broncos last year as a walk-on. So much so that he eventually earned himself a scholarship for the team. And it is not a wonder. He provided much-needed depth for the Broncos last season as the Broncos had to play with a bit of an under-sized defensive line. As the article states, he’s done so well the coaches opted not to go with a signee this past recruiting class. Along with some fresh-faced underclassmen (that will provide some pounds up front) ready to add in their contributions, still look for Lui to be in the thick of things in the nose tackle position. He is “only” a sophomore academically he is going to provide a lot of maturity and leadership.

Sure is. And he’s out here rooting for everyone!

To all the unsigned athletes of America today, work hard and you can achieve your dreams

Coming from someone who is trying to do the same✊ pic.twitter.com/XA1bdnG1I9

He turned down a prominent role in Pitch Perfect 3 so he can focus on playing football. But look for a cameo on the Blue.