Here we are again. How’d that happen? It’s been an exceptionally slow offseason to this point, but no more—the countdown is starts today and the time warp portal to kickoff is now open! OBNUG started this wacky tradition years ago and by golly, the show must go on...so if you’ve been logged off during this slow period, now’d be the time to reacquaint yourself with OBNUG. Football may still be 100 days away, but the countdown is here right now. Gentlemen, start your countdown...

We’ve got JUST 100 days until Boise State opens their season against Troy, so today we’ll highlight a player with no official number, but with a big enough frame to fill out the theoretical jersey number—Isiah Moore 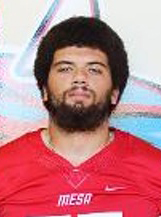 The talented 4-star lineman was one of the first commits of the 2017 class, committing to Scott Huff and the Broncos allllll the way back in June (last June, obvs). It's probably good for the Broncos that Moore committed before his All-American sophomore turn at Mesa CC because teams far and wide were panting after the big OT, but he'd already created quite a relationship and rapport with Huff and the staff. In fact, on signing day, the now-departed Coach Huff said that he'd frequently drop in to see Moore in Arizona and more than once arrived to find other coaches trying to pry his gaze from the Broncos. Moore eventually ended up with at least a baker's dozen in his offers category—among them West Virginia, Arizona, Houston, and UCLA—and some were concerned he might fall off the Bronco wagon before signing day, but he re-affirmed his commitment right before the February 1 signing date and the rest, as they say, is history.

Moore was rated a 4-star tackle coming out of Mesa, earned All-America honors, and landed a plum spot on Scout.com’s top-100 JuCo list (23). Prior to enrolling at Mesa, he was committed to Bowling Green.

This is Moore’s twitter handle (more on that in a moment), so I’ll go out on a limb and say it’s okay to call him this (at least from a safe distance). 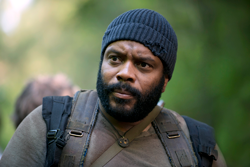 It seemed rather touch-and-go for a while with Moore’s commitment and we’re certainly thankful that Coach Huff stuck around at least through signing day or we might not have Moore in the fold today. But here we are, and here Moore is...as he made landfall in Boise a few days ago—just in time for the nice weather to greet him. The Broncos lost some talent and versatility to graduation at the end of the season and had to say goodbye to stalwarts like Mario Yakoo and Steven Baggett, and certainly lost some stature and experience with the departure of grad-transfer Will Adams—this is where Moore fits in rather nicely.

If you watched his highlight film above, you’ll see that Moore is a true mauler and a frequent de-cleater. He’s very athletic and blocks only with the nastiest of intentions (see :22 second mark where he darn near clubs a man to death with his forearm). Moore seals the edge well, finishes his blocks, and is just an all around scary specimen. Of course, scary specimens are a delight if they’re draped in blue and orange, and I think Moore has the capacity to be an all-conference performer right out of the gate. The length of his commitment might’ve caused some Bronco fans to sleep on this kid’s abilities...but this is a legitimate 4-star talent and one of the top JuCo prospects in the nation last year. This is going to be fun.

Indeed. And he’s close by.

Moore can grow a full beard in just 12 hours and was born with a 5 o’clock shadow.