Share All sharing options for: Know your enemy: championship edition

Fresno State is an old enemy, so they are relatively known...but seeing as I withheld the KYE article last week (and let’s be honest...was pretty inconsistent with these this season), I figured we should go out with a bang. A bang of knowledge. Let’s get that trophy.

10) The area where Fresno, California now resides was first inhabited by the Yokut Indian tribe and before that, probably dinosaurs. It wasn't till the after the California Gold Rush that dejected prospectors took a look at the spot and said "I guess this is good enough". Fresno County was founded in 1856 by fu-manchued caucasian peoples who named the settlement "Fresno" after the Spanish word for ash trees (ash trees were in abundance along the banks of the San Joaquin Phoenix river). By 1872, the Central Pacific Railroad (CPR) had established a station in the heart of the county and many residents of neighboring communities moved to be closer to the convenient new travel hub—the resulting population boom helped Fresno to become an incorporated city just 13 years later. To this day, weary travelers will still find themselves in Fresno—to which they generally state, "well, I suppose it’s better than Barstow."

8) In 1893, an illiterate building contractor named Joseph Spinney sat on the Fresno board of trustees. Spinney was an enormously corrupt figure and had gained influence by representing the vice interests of the town (you know...gambling, booze, prostitution, table tennis...)—he also held a powerful swing vote that he used to push through political appointments, secure building contracts (for himself) and influence the hiring of police officers and firemen. Spinney was eventually made chairman of the board, effectively making him the mayor of the city...a position he held for a full ten minutes before resigning and nominating pal C.J. Craycroft to take his place (a slam-dunk nomination, since he still held that mighty swing vote). Spinney's portrait still hangs in Fresno's City Hall along with all the other past mayors despite him having served just slightly longer than it takes my kids to down two sleeves of Oreos. Bummer too...shady businessmen that amass wealth and influence by operating brothels and saloons generally make really good politicians. 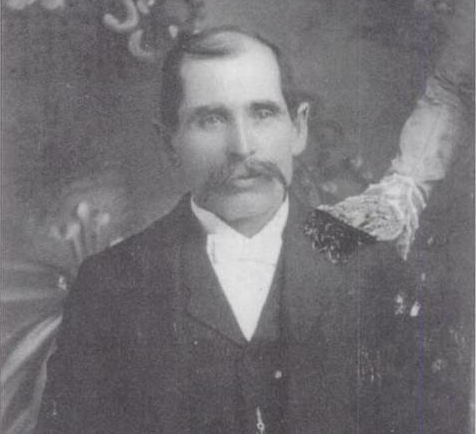 “Let me take your city for a little Spinney”

7) According to legend, Fresno State's nickname was devised in 1921 by student body president Warren Moody and his friends after they were befriended outside the main campus building by a white bulldog. The dog supposedly "adopted" the group, or just took a shine to their adherence to the 1920s fad of carrying salamis in ones pockets. Moody's chum Arids Walker made the motion to adopt "Bulldogs" as the official nickname in a student body meeting and on November 21, 1921, the Morning Republican first referred to Fresno State as the "Bulldogs". Unlike Louisiana Tech's bulldog mascot, however, this one was a coward and never saved anyone from a dorm fire.

6) Fresno played their first season of collegiate football in 1921, but had a disappointing 2-5 season under head coach Arthur Jones (not the guy from Laugh-in...that's Arte Johnson). The fledgling squad's only wins came against Modesto JC and Cal Tech, and they suffered two losses to Fresno High School and their first ever loss to future-rival San José State. The next year, Jones righted the ship and led the team to a 6-1 record and a California Coast Conference Championship, although against still largely high school squads and possibly a pack of possums that thought they were people.

5) While the walrus-like Pat Hill will always hold a special place in my heart in the Fresno State coaching succession, Stanley Borleske might be my favorite. Borleske started out playing end for Michigan and was said to have caught one of the first ever forward passes—an idea that one-time Boise State OC Robert Prince thought "too radical". Borleske followed up his playing career with a head coaching gig at North Dakota State, where he's credited with giving the team their nickname—the Bison (after Street Fighter II boss M. Bison, I'm believe). Borleske took over the Fresno State squad in 1929, and probably because of the stock market crash, the squad went 1-7. However, the following year, Borleske led the team to their first ever undefeated campaign—an 8-0 triumph over the now-defunct NCAC (Northern California Athletic Conference). Come to think of it...since they went 1-11 last season and are now back in the title game, you could say Jeff Tedford “pulled a Borleske” (just don’t say this in mixed company). 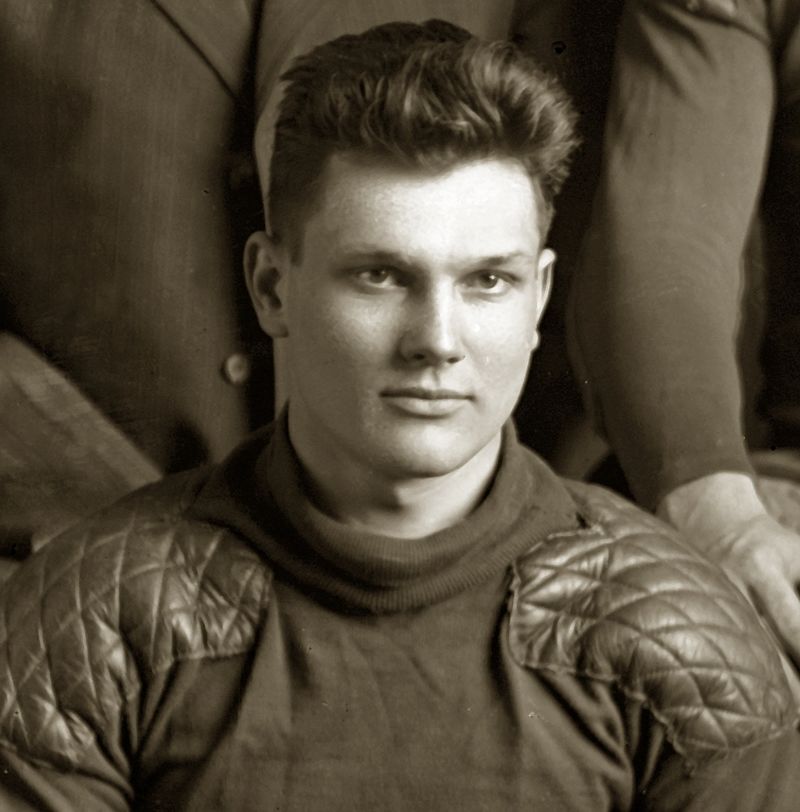 A firm handshake and a well-padded shoulder.

4) Generally, obscene football scores are found in the earlier part of the century when parity was rare and coaches were praised for being a-holes (the Saban effect)...but Fresno bucked that trend in 1991 when they defeated New Mexico 94-17. Why the old school curb-stomping from Jim Sweeney's Bulldogs? The oldest reason in the book: revenge. Lowly New Mexico had upset the 10-0 (and 23rd ranked) Bulldogs two years earlier and whilst exiting the field, the ultra thick-skinned Sweeney had been taunted by Lobo onlookers who dropped the "s" on the headman's last name, likening him to a frankfurter, if you will.

Sweeney, like an elephant, never forgot...and when the Lobos hit Bulldog Stadium, Sweeney, reluctant to again be a "weenie", became "Sweeney the meanie". The score was 59-7 before halftime and Sweeney still had his team throwing like a Hal Mumme/Mike Leach fantasy—even calling a timeout to make sure they could punch in one more before halftime (which they did). Utlimately, it was the biggest rout in Fresno State's history, and sadly, only the 2nd worst beating the Lobos have ever received. Lesson: Don't ever call Jim Sweeney a "weenie" (especially because he died in 2013 and that’s really not nice). 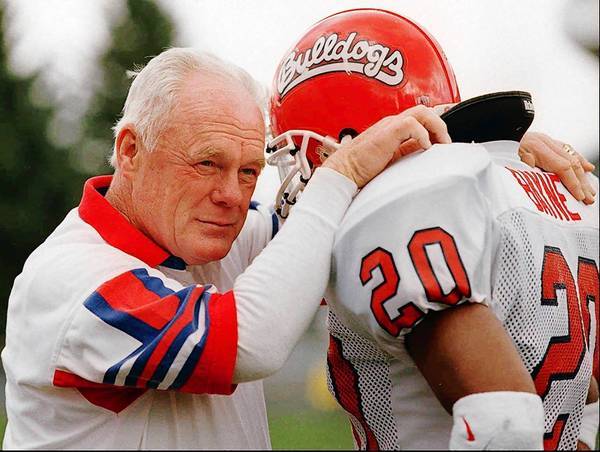 “Call me a ‘weenie’ will they? Burn their village.”

3) One of Fresno State's most decorated athletes was Cornelius "Dutch" Warmerdam—a pole vaulter of some renown and former world record holder. In 1940, at a track meet at Cal, Dutch became the first person ever to clear 15 feet in the pole vault, a feat he repeated 42 more times in competition throughout his career. At the top of his game, Warmerdam set 7 unofficial and 3 official world records in a 4 year span—the last of which—a 15'7" vault, stood for 15 years. Warmerdam never was able to taste Olympic glory since the 1940 and 1944 games were squashed by WWII (and he was no longer considered an amateur in 1948) but he is enshrined in the National Track and Field Hall of Fame as well as the Millrose Games Hall of Fame. Warmerdam accomplished all of his feats of derring-do using a bamboo pole—that’s a guy that didn’t give a Warmerdam.

“Let me introduce you to Xtreme Pick Up Stix”

2) In 2009 and 2010, Fresno was ranked last and third from last, respectively, in a study of the smartest cities in the United States. If you're looking for a yardstick comparison—based on the study's grading criteria (college grads, voter engagement, reading habits, etc) Fresno was tagged with an IQ score of 3, while Raleigh, NC...the top performer in the same study had an IQ score of 170. This reminds me of a great joke a friend from Fresno always tells me: "Banana".

1) Supporters of the Fresno State football team are known as "The Red Wave". The origins of the nickname are mysterious, but some say it came about when someone looked up "Crimson Tide" in a thesaurus and realized it had less syllables than “The Scarlet Swell”.