Broncos stifle the Cougars to right the ship in Provo

Share All sharing options for: Broncos stifle the Cougars to right the ship in Provo

The Broncos started things off with the ball, but a Brett Rypien INT gave the Cougars the ball in short order and an even shorter field. After the refs botched a fumble (and subsequent Bronco recovery), BYU was able to get on the board to make it 7-0 Cougs. The Broncos couldn’t find a rhythm on the ensuing possession and punted the ball away, but the defense held allowing the offense a bit of a breather. When the O came back with a semi-short 52 yard field...Ryp and crew finally got something going and a 9 play drive led to an Alexander Mattison score. Both teams traded punts and then a Kekoa Nawahine INT on the ensuing Cougar drive led to a Bronco field goal. 10-7 Broncs as we hurtled toward halftime. The Broncos D held on the BYU possession allowing the Broncos one more shot at points before half and Rypien finally got off the scoring schnide, hitting Sean Modster for a 24 yard TD to cap off a 74-yard scoring march. 17-7 Broncos at the half. Big first half takeaway: running game looking MUCH better, and I hate to say it, but it may be because Wolpin got zero touches. Mattison led the way with 48 yards and a score in the first half.

The Broncs couldn’t keep up their torrid 2nd quarter pace after the half, but the defense tightened up and Alex Mattison got loose (118 rushing yards), letting the Broncos extend their lead and kill enough clock to put the game out of reach for the Cougs...who suffered their 5th straight loss for the first time in over 40 years. Late in the 4th, it looked like BYU might have something cooking, but Andy Avalos dialed up all sorts of blitz packages that ultimately resulted in a Vander Esch INT that effectively sealed the game for the Broncos. Broncos move to 3-2 with a tough, tough showdown with ranked San Diego State next weekend. The Cougars...well, #CougarTears

Instant analysis: GREAT job by the O-line tonight protecting Rypien’s neck and getting a good push on a solid BYU line. Also, I think the blueprint is clear from here on out...one RB has to get at least 70% of the carries. I think that guy is Alex Mattison with a smattering of Mahone and Wolpin. His vision improves with more carries and he wore down the Cougar D.

Full stats are below 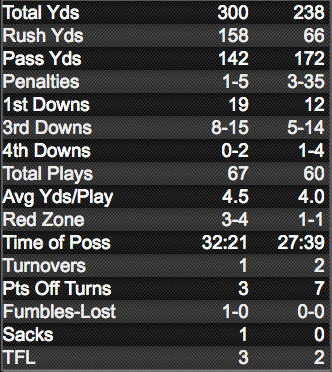