Share All sharing options for: Know your enemy 2017: BYU edition

You know the drill. Let’s GO!

10) Provo, Utah—the home of Brigham Young University—was discovered by a missionary...but not one of the Dockers and starched dress-shirt variety. A Spanish Franciscan missionary named Father Silvestre Velez de Escalante probably stumbled onto the area right around the time that America was born. It wasn't till about 75 years later when 33 Mormon families from Salt Lake established Fort Utah where Provo stands today. Just a year later, the settlement was renamed "Provo" in honor of French Canadian fur trader Étienne Provost—widely believed to be the first man of European descent to behold the Great Salt Lake in all its salty glory. Later that year, the Battle of Fort Utah occurred...which is not an entirely pleasant story, so I'll let you google that one in your spare time.

9) BYU's first season of big-boy football came in 1922 when they put together a less-than-stellar 1-5-1 season under head coach Alvin "Twitchy" Twitchell. The fighting Twitchells only managed to muster 23 points in 7 games that year and surrendered 197. In fact, Twitchell never saw a winning season in his 3 years at the helm...that is, unless he ventured over to nearby Logan to watch Dick Romney's Utah State squads (yeah, same Romney). It wasn't until 1929 that BYU finally recorded a winning season, now with Dick Romney's brother Ott at the helm (yeah, same Romney). Ottinger "Ott" Romney had come to BYU from Montana State, where his roughly .500 win percentage was actually attractive to the perennially losing BYU powers-that-be. Romney did just okay in his 9 years with the program—leaving with a .571 win percentage, but that percentage was the high-water mark until 1972 when LaVell Edwards took the reins. 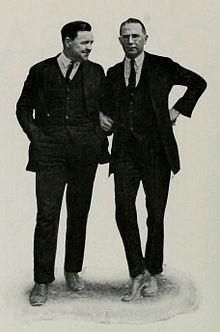 One of these guys is Alvin Twitchell

8) Speaking of LaVell Edwards—he’s the winningest coach in BYU football history, with 257 wins, and as you'd expect, also the longest tenured coach in the school's history by at least 20 years. When Edwards arrived at BYU, the school had suffered through years of football mediocrity, but his focus on transforming the offense into that of the pass-first variety led to big changes in the team's success and perception. For instance, no one could really name a BYU QB before Edwards' tenure...now you can probably name several (Steve Young, Jim McMahon, Ty Detmer, Steve Sarkisian, Jake Heaps, etc). Edwards' squads won 19 conference championships and 1 national championship (1984). They won just 3 since his retirement in 2000, but remember...they aren't in a conference now and therefore can not win it...but neither can they LOSE it, so that's smart thinking in CougLand. By all accounts, Edwards, who passed away last year, was a great guy, but his sideline demeanor made him always look like Chuck-a-Rama just said they were out of pork medallions. 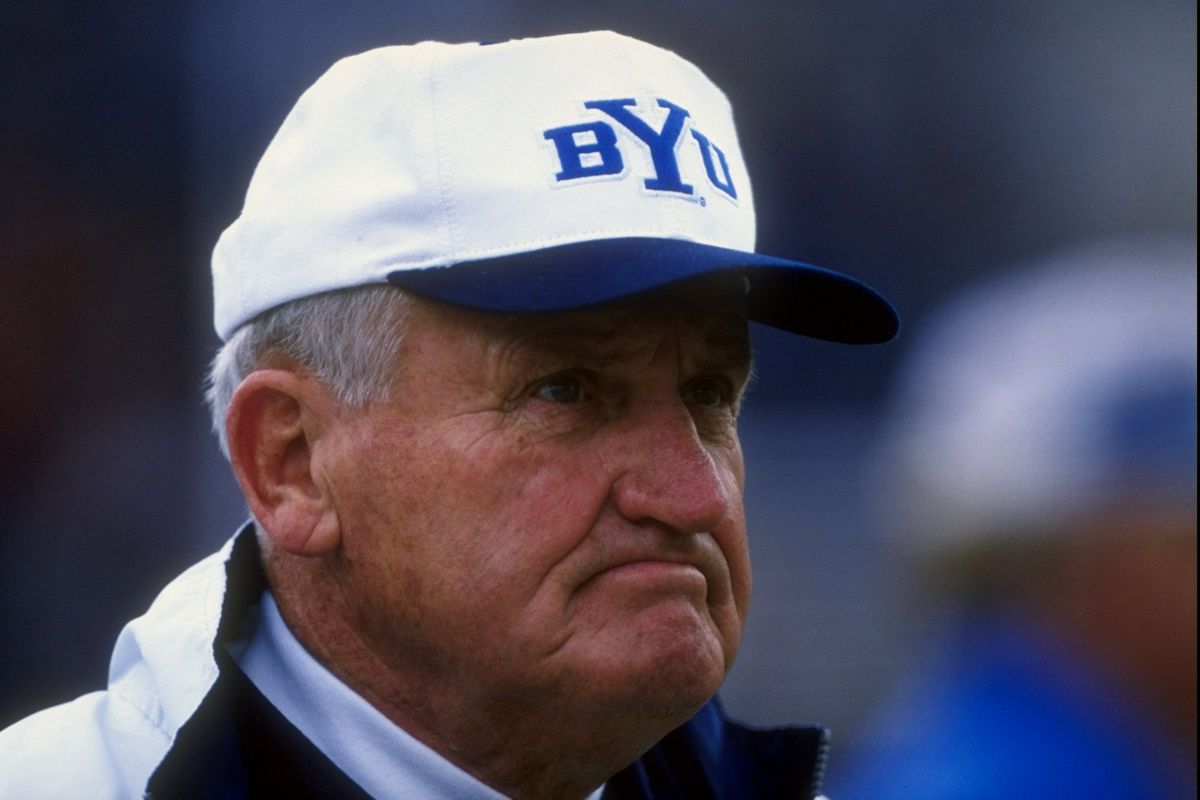 7) The anti-LaVell Edwards in the BYU coaching tree might well be Hal Mitchell, who holds the distinction of the head coach with the worst winning percentage in school history (.266). Mitchell coached the Cougars from 1961 to 1963 but never really found his groove and won just 8 out of 30 contests. Mitchell's pre-BYU career was a bit smoother sailing, as he was a standout offensive tackle at UCLA that was drafted in the 14th round of the NFL draft by the New York Giants. Mitchell played just one year in New York before moving on to smaller and worse bigger and better things. If there's a silver lining to Mitchell's career, it's that through him, LaVell Edwards got his start at the university. Mitchell was bound and determined to bring the single wing offense to Provo and Edwards was Mr. Single Wing (also my high school nickname). Mitchell flamed out, but Edwards stuck around. Lining status: silver.

6) BYU's mascot is the cougar and has been since it was chosen by head coach Eugene Roberts (no relation) in the 1920s. BYU purchased a pair of cougar cubs for 50 cents each in 1924 to excite the BYU fans at athletic events because in the 20s you could buy a cougar for 50 cents but not a beer...well, you could never buy a beer at BYU...okay, bad example. Anyway, the cougar cubs were housed on the south side of BYU's campus until 1929 when they broke free from their cage and killed two dogs and began to stalk local livestock (the livestock later took out a restraining order). When the cougars were recaptured, it was decided that the school should no longer "own" the predatory mascots and one was donated to the Salt Lake Zoo and the other died (bad dog). Still, live cougars procured from nearby zoos or hunters roamed the sidelines on a semi-regular basis through the 60s and then Cosmo Cougar arrived on the scene.

Cosmo is the costumed mascot of BYU athletics and you'll likely see his monstrous visage several times this evening. He was the brainchild of pep chairman Dwayne Stevenson and first appeared in 1953. His name is supposedly derived from the "diverse" student body (which you'll also see this evening—wear shades) because BYU is COSMOpolitan you see. Fun fact: Cosmo served his mission in Indonesia preaching the gospel to Sumatran Tigers, but experienced a very low conversion rate and developed trench foot. 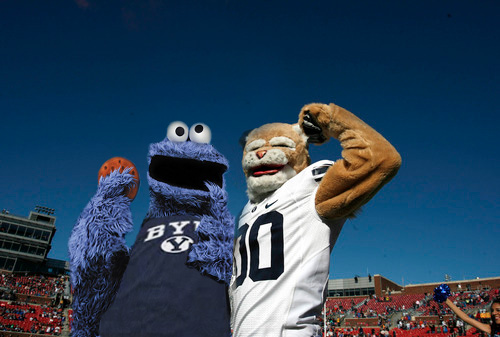 5) Clyde Sandgren penned "The Cougar Song" in 1932 and it became BYU's fight song after it was copyrighted in 1947. The song is alternatively known as "Rise and Shout" and is tediously supposed to be sung after each touchdown and field goal. The lyrics are probably a bit too lengthy for me to publish here in their entirety, but the rousing anthem begins with the words, "Rise all loyal Cougars and hurl your challenge to the foe", a line that makes it sound as if BYU fans ate some seriously bad challenge and it's about to come back up. Urp.

4) BYU's oft-maligned Honor Code has invited its share of criticism and controversy over the years, but one outdated requirement was finally revisited in 2015...the school's ban on beards. Yes, the school is named after a famously bearded gentleman, but whiskers were put on ice (yum) in the 1970s after school president “The Importance of Being” Ernest Wilkinson declared that BYU was "no place for grimy, sandaled, tight-fitted, ragged-Levi beatniks"...aw, what about tight-fitted Bugle Boys?

At any rate, the beard rule became enshrined in the school's Honor Code and remained untouched until years ago when the school made several exceptions to the rule. Firstly, if your religion requires it (think Muslims, Sikhs) you may stow your razor. Secondly, if a medical condition makes shaving painful or difficult you're also in the clear. Thirdly, if you are playing a bearded character in a play and don't want to use spirit gum (Holy Spirit gum in Provo), you also may cancel your subscription to Dollar Shave Club. So, in summary...yeah, you pretty much still can't have a beard at BYU.

3) Golden-Globe nominated actor Aaron Eckhart is a BYU alum. Eckhart served a two-year church mission in France and Switzerland before enrolling at BYU-Hawaii and then BYU's main campus in Provo. He graduated with a BFA in 1994, but not before getting his first acting break in this seminary video entitled Godly Sorrow. In the film, Eckhart plays a man who ruins his marriage by breaking a picture frame in slow motion and then walking down a flight of stairs. Reportedly, Christopher Nolan saw the film and immediately made a mental note to someday cast Eckhart as a dashing district-attorney if he ever made a trilogy of Batman films. As luck would have it...he did.

2) Author Stephenie Meyer, who penned the Twilight series of books about some emo vampires who fight Native American werewolves or something is a BYU alum (B.A. '93). Prior to writing the book series that made Bram Stoker AND Bela Lugosi spin, rotisserie-style, in their graves, Meyer was a stay-at-home mom and had no writing experience whatsoever (shocker). My wife dragged me to the first book-to-film adaptation in 2008 and I should have known something was amiss when I realized I was the only male in the theater. Sure, I earned some brownie points that day but at what cost? AT WHAT COST?!

1) Confederate Colonel John Pemberton...a morphine addict, decided to find a substitute for his drug of choice at his drug store in Georgia back in 1885. His first beverage that he developed was called French Wine Coca nerve tonic, but in 1886 Fulton County passed prohibition legislation and Pemberton had to develop a non-alcoholic tonic...this one he called Coca-Cola.

The tonic started being sold in 1886 as a patent medicine at soda fountains and Pemberton claimed it would cure morphine addiction (he'd know), indigestion, nerve disorders, and even impotence. The two key ingredients in the wonder drink were cocaine and caffeine...the cocaine being derived from the coca leaf and the caffeine from kola nut (hence "Coca-Cola"). In fact, Pemberton called for five ounces of coca leaf per gallon of syrup and as late as 1902, there was up to nine milligrams of cocaine in a glass of the beverage. The syrup ceased to contain any "real" cocaine after 1904 but in the Southeast "dope" remained a colloquialism for Coca-Cola long after coke went straight. Anyhoo, this is all just a fun prelude to the news that BYU started selling the drink on its campus like 2 weeks ago. Dope. 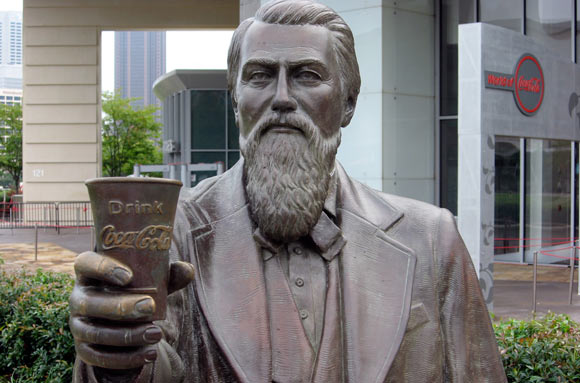 Man, Brigham took to the news rather quickly