Share All sharing options for: Cowboy up: Boise State vs Wyoming game preview

The Broncos were undefeated and ranked 13th in the country when they strolled into Laramie last season and were dealt a close, yet still devastating loss. In fact, when Josh Allen is eventually drafted, his Houdini-esque 27 yard TD strike on 3rd and 13 (and 2-pt conversion) will likely be shown as he walks to the stage—it tied the ball game to set up Wyoming's game-winning safety. Yes, a game-winning safety. That was a thing. Now my blood-pressure just spiked, gimme a minute.

A lot will be made of the Cowboy under center on Saturday. Some overzealous pundits have lauded Wyoming's junior QB as the next Cam Newton and a "generational talent". While these pronouncements are objectively insane, Allen did have a LOT to do with last year's upset and should not be taken lightly. That said, this year's Wyoming team is missing a lot of weapons that made Allen look maybe a tad better than he actually is. Specifically, first-team All-MWC RB Brian Hill has moved on and top receiving targets Tanner Gentry and Jacob Hollister have also mosied. Allen is going to have to shoulder a bit more of the load on Saturday and that suits me right down to the ground.

3. The beatings will continue until morale improves

Don't let last year's result confuse you, Boise State has owned Wyoming and with the right amount of effort will continue to do so. Boise State is 10-1 in the series betwixt the schools with their sole loss coming last season in the wind-swept hellhole known as Laramie, Wyoming. Lest you think I’m not sweating this team...I very much am—as the UVA game taught us, no team is a layup against this year’s version of the Broncos. However, I think the motivation of sending home the Cowboys and their Principal Strickland-looking coach with yet another L after they cost us a berth in the title game last season will loom rather large. Don’t make a fool of me, Broncos.

4. Show this to every player you know...on loop 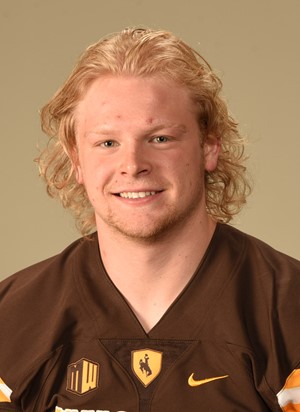 Part QB, part demi-god...this junior signal-caller is also the conductor on a runaway hype train. Allen has many physical tools—height, the ability to throw a ball far, tallness, arm-strength, not being short, etc. and for all the crap we give him...he did sort of eat the Broncos lunch a season ago. We should be more stingy with our lunches this weekend. Expose this man!

The Cowboy defense is better when the 6’5” 255 lb junior defensive end is in it, as he can be one of the more effective pass-rushers in the league when he’s healthy. He already has notched 4 sacks and 33 stops this year, so you’re likely to hear this big fella’s name quite a bit on Saturday night.

This freshman running back is currently leading the team in rushing (64 carries for 285 yards) which bodes particularly well for the Cowboys after the loss of all-timer Brian Hill. Woods is a big back, at 6'3" and 210 lbs., so if he adds some bulk, he may well resemble the Juggernaut by the time he's an upperclassman. You know who's bigger than 6'3" 210 lbs. though? Leighton Vander Esch. Target acquired.

The sophomore receiver doesn't lead the team in yardage (that'd be Austin Conway), but he is only 10 yards behind Conway with half the touches...which I think makes him the most efficient wideout on the Cowboys roster. At 6'2" and 204 lbs, Johnson is no tiny slot receiver either...cover this man.

The junior safety is a Thorpe Award and Bronco Nagurski Award watch-lister and also landed on the Chuck Bednarik list, which isn't terribly surprising considering he was a semi-finalist for the Thorpe award a season ago. He is, in effect, a tackling machine. He's racked up a total of 310 tackles in two and a half seasons and the lion's share of those are solo tackles (and 19 are for-loss). This Skyler Seibold-looking dude gets it DONE in the Cowboy secondary.

Me picking the Aztecs to win worked like a charm last weekend, so I’m tempted to call another Cowboy upset, but my heart won’t let me: