8) The school's Rally Committee named the original school mascot "Montezuma" after the ruler of the Aztec empire in the early 1500's, Montezuma II. Montezuma was also lucky enough to have a particular South American brand of traveler's diarrhea named after him...so the university probably did him one better. In 2000, student groups started lobbying to alter the school's mascot a bit (probably the diarrhea thing) and in 2004, the new, improved mascot was unveiled and dubbed, simply "Aztec Warrior" and in 2010, a supplemental mascot was introduced—a jaguar named "Zuma". Zuma lasted all of two seasons before he was unceremoniously stripped of his duties and sent to live in a South American zoo. 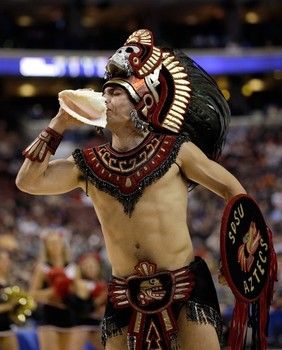 Manscaping...not just for the Mayans.

7) The all-time winningest football coach in San Diego State history is Don Coryell, who racked up a 104-19-2 record in his 12 years leading the program. Coryell was a former Army paratrooper and I believe hosted Soul Train for a short period before he took the reins of the program. During his tenure, he led the team to 3 undefeated seasons, 2 one-loss seasons and only once lost more than 2 games in a year. His 1969 team went 11-0 and finished 18th in the coaching polls. Coryell left the program in 1972 to coach the St. Louis Cardinals (not the baseball team...the franchise now known as the Rams...of Los Angeles) but landed back in San Diego by 1978 as the coach of the Chargers. When Coryell left the Aztecs program, he must have done so in a hurry...forming a giant vacuum that sucked the life out of the program as they kinda stunk for many years after his exodus (and until semi-recently believe it or not). Pizza-eater Vinny Perretta's father Ralph, played for Coryell as a Charger—there are your six degrees of separation (if you can link them both back to Kevin Bacon, I'll buy you a Sprite). 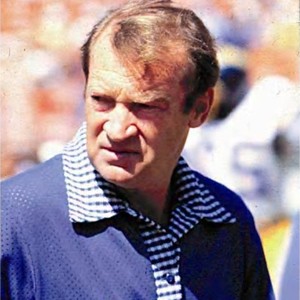 6) Every coin has two sides...so your losingest football coach in San Diego State University history was Ted Tollner, who piled up 48 losses in 8 years at the helm. Tollner had previously coached at USC, where he had failed to impress with an overall record just a shade over .500. Tollner's lack of luck on the sidelines might be because he'd used it all up in 1960, when he was QB for the Cal Poly team whose plane crashed in Toledo after playing Bowling Green—killing 22 people. My motto has always been, "If you walk away from a fiery plane crash, you can lose as many football games as you want."

5) One of the new(ish) inductees into the Pro Football Hall of Fame, running back Marshall Faulk, played his college ball at San Diego State and was pretty decent back then too. As a true freshman in 1991, Faulk rushed for 386 yards and 7 TDs in just the second game of his career—a win, as you'd expect—over University of the Pacific. The university of the Pacific killed their football program in 1995—probably because there had been a Marshall Faulk sighting in the vicinity. Faulk set the WAC rushing TD record during his Aztec days that stood until 2008, when it was broken by Boise State's Ian Johnson.

3) Baseball Hall of Famer and Padres legend Tony Gwynn was also an Aztec during his collegiate career. Gwynn starred on the diamond and the hardwood for SDSU and believe it or not, was selected in the NBA draft by the LA Clippers the same year he was drafted into the major leagues by the Padres. Nicknamed "Captain Video" by fans without the foresight to name him "Captain DVD", Gwynn was a 15-time All-Star selection and won 8 National League batting titles. Gwynn was never a real slugger, hitting just 135 home runs in his 20-year pro career...but the guy could hit with the best of 'em—batting .338 for his career and striking out just 434 times (Aaron Judge struck out that many times in the ALDS) in nearly 9,300 at-bats. Gwynn died in 2014, but his baseball cards will always have a special place in my card binder—at the front. 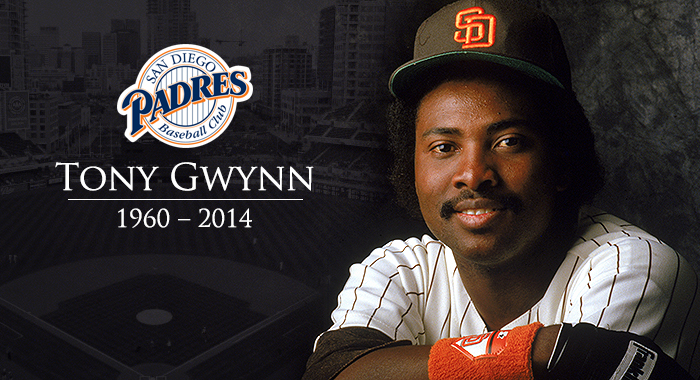 1) In 1915, the San Diego City Council actually paid a sewing-machine salesman named Charles Hatfield to make rain to fill the Morena Dam Reservoir. Hatfield had previously conned helped Los Angeles ranchers and Yukon Gold miners by producing rain with a secret mix of chemicals that he released from the top of towers. In 1916, San Diego got more rain than they bargained for when heavy rains caused two dams to fail and killed 20 locals. Hatfield then had the stones to seek payment after the flooding, claiming he'd fulfilled his contract by filling the reservoir. The city declined his invoice and instead sought to get him to pay for the flood damages—in excess of $3.5 million (or 800 gazillion in today's dollars). Given there was no written contract, both parties were stumped and eventually, Hatfield attempted to settle for just $4,000 (9 billion in today's dollars) and sued the city council. Two separate trials ruled that the rain was an "act of God", but Hatfield persisted all the way till 1938 before a judge presumably told the City Council they were idiots and Hatfield that he was a flimflam man...at which point, he went back to selling sewing machines and trying to sell snow to Eskimos.