We Bronco fans have been fortunate to root for a university that fields a good to great team on an annual basis, which is a whole lot more than most of what the rest of the MWC or AAC can say. But what is the reason for Boise State's success over the last 20 years? Certainly BSU has not brought in overly good recruits, as far as star ratings go, so the reason for such long and sustained success must be tied to a number of reasons. I believe the reasons hinge on two sources.

1: BSU brings in guys who are selfless and team oriented.

2: Players are developed through superior coaching and environment

Over the years, as BSU has increased in name recognition and notoriety, they have been able to bring in better and better players. However, as we have seen in 2006, 2009, and 2014, the players we have are not rated high because of talent per se, but because they typically lack some tangible measurable; they are just a bit short, or not heavy enough. We can name players who have been high on talent but literally short, Doug Martin, SWR, or Kellen Moore come to mind.

BSU believes in player development, in fact, it has built its system entirely on it. Players typically don't see the field until they are redshirt Sophomores or later because they need time to prepare their bodies and adapt to the the pace of the collegiate game. The benefits are apparent, BSU fields teams that are comprised of mature, grown men that have been groomed for roughly two to three years of success. The bad side is that injuries have a markedly sharp effect if backups are too few or too green.

BSU has to rely on player development because while they get good players, they rarely get college ready players straight out of high school. This statement is true for most programs, but 'college ready' is a relative term, and there little doubt that most BSU recruits would probably see the field as freshmen at most Sun Belt schools. Conversely, a good portion of SEC recruits would see the field as true freshmen if they were at Boise St. A good example is DSG, he was bound for aTm, where he would have been buried on the depth chart for a couple of years, but was immediately called into action as a true freshman at BSU. (Here in Texas, aTm haters say it means something that would make most people blush).

So while star ratings are not the end-all, be-all, better players allow for better depth and provide a higher platform from which the program can jump, especially if a solid development program is in place. Everyone knows this and is why everyone clamors for the best players they can get their hands on. Some teams succeed in getting solid recruits, some do not. 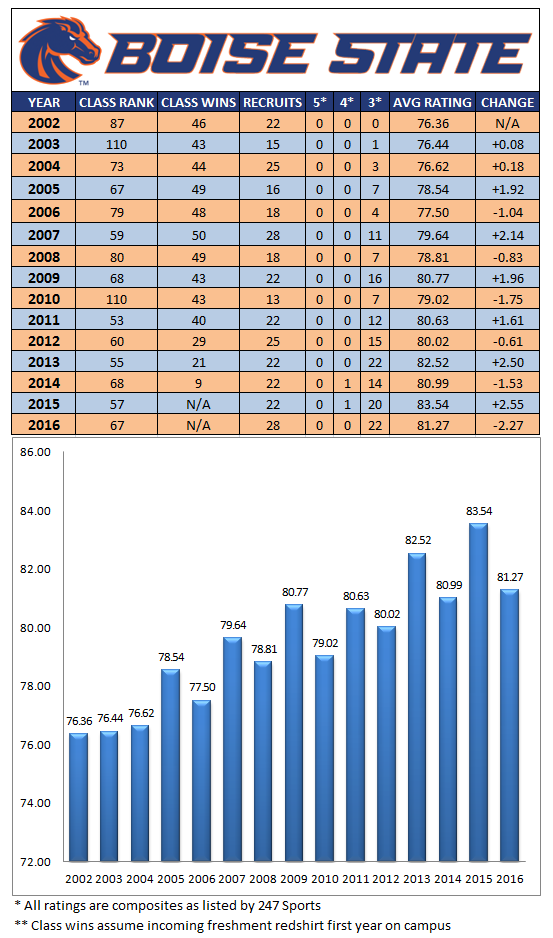 Above on should see an interesting trend forming. Namely, that since 2005, there seems to be a tick-tock motion in recruiting. One year will see the best class in school history, as far as average recruit ratings are concerned, then the next year will dip just a bit. The 2016 class is the 3rd best class, average recruit-wise, with a rating of 81.27 average per recruit. I pulled the information from 24/7 Sports Composite, as this service aggregates their ratings along with other high-profile evaluation sites like Scout, Rivals, and ESPN. This evens out the ratings and gives a very broad evaluation of all each recruit. Scout has BSU ranked at 49th nationally, Rivals has BSU at 55th; ESPN has Boise St at 68th; and 24/7 Sports Composite has BSU at 67th in the nation.

Now as far as what the numbers mean; 24/7 has it delineated as follows:

110 - 101 = Franchise Player. One of the best players to come along in years, if not decades. Odds of having a player in this category every year is slim. This prospect has "can’t miss" talent.

100 - 98 = Five-star prospect. One of the top 30 players in the nation. This player has excellent pro-potential and should emerge as one of the best in the country before the end of his career. There will be 32 prospects ranked in this range in every football class to mirror the first round of the NFL Draft.

97 - 90 = Four-star prospect. One of the top 300 players in the nation. This prospect will be an impact-player for his college team. He is an All-American candidate who is projected to play professionally.

89 - 80 = Three-star prospect. One of the top 10% players in the nation. This player will develop into a reliable starter for his college team and is among the best players in his region of the country. Many three-stars have significant pro potential.

79 - below = Two-star prospect. This player makes up the bulk of Division I rosters. He may have little pro-potential, but is likely to become a role player for his respective school.

So this means that BSU has pulled a class whose average recruit is a low 3* recruit. But as we have seen this does not mean very much if the players are developed. In fact the majority of NFL players are 3-star recruits.

NOW how did Boise State in relation to the other teams in the MWC?

Here we can see that not only did BSU bring in the highest ranked class, they also brought in the highest rated average recruit. But the one thing that should stand out is that CSU, was 2nd to BSU in both class rank and average recruit. The one thing to remember is that we will not see most of this class until 2018 at the earliest, so we will worry about that bridge when we cross it. The gap is closing in the MWC, so development is what will win the day.

Look at UNLV pulling in the 3rd best class in the conference with new HC Tony Sanchez. But another thing one should notice is the top six teams all nearly averaged 3-star recruits, so BSU is not the only program that can pull in decent talent, so I hope that for the next two to three years, BSU is able to curb defections in the staff. Coaching continuity cannot be stressed enough.

It is a foregone conclusion that the MWC and AAC will be vying for the NY6 game on a near annual basis as the two conferences have split the first two berths, and more importantly, won. This year's representative, of course, was the Houston Cougars.

Below is how each PROGRAM RANKED NATIONALLY 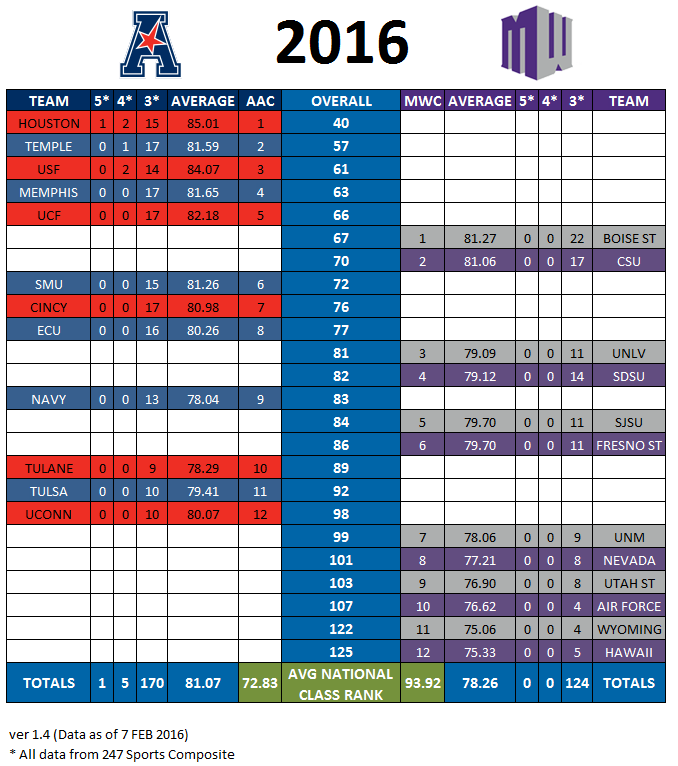 Compared to last year, where the MWC had the top three classes, this year the pendulum has swung away from the MWC and toward the AAC. I doubt this should be cause for alarm, but I will point out what I do think is important. Houston is recruiting VERY, VERY well. In 2015 Houston recruited just seven 3-star recruits, but that can attributed to the fact that Tom Herman was hired at Houston in December 2014, and was not able to recruit very well due to the quick approaching national signing day in February. However, with just one year under his belt at the helm of Houston he pulled in the #40 class, and Houston was on pace to pull in a top 25 class if they didn't lose a 4-star recruit late in the game.

Also, notice how Boise St would have pulled in the 6th best class if we were part of the AAC this year. Again, we will see most of the results from 2018 to 2020, it should be noted that if the better teams in the AAC are successful in keeping their coaches around, they could have a budding Power Conference on their hands, and since they are still viewed as 'The Old Big East' the conference still has some cache, especially since Cincy, Houston, and UCONN have all been in a power conference at some point in their histories. And don't think for one moment that the AAC commissioner, Mike Aresco, won't use NY6 wins along with AAC cache to better position the conference. For the MWC to get to NY6, it is Boise State or NO ONE. The AAC, on the other hand, may have two to three legitimate contenders every year, namely, Houston, Cincy, and Memphis. Navy will have a steep drop off without Keenan Reynolds, and Temple seems to be a flash in the pan. [UPDATE] In reading a well reasoned point by BoiseBronco, I must agree that Memphis is the most vulnerable of the three programs mentioned above in their ability to keep recruiting and program momentum going.

Below is a chart that breaks out the AVERAGE RECRUIT RATING 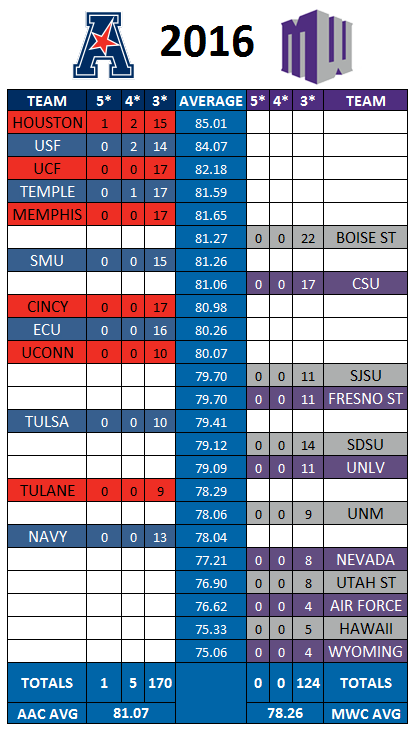 Here I ordered the teams according to the average Recruit rating per team. Again, Boise St comes in 6th with an average recruit rating of 81.27; last year BSU was first between conferences with an average rating of 83.52 per recruit. The AAC is too new to establish a long-term trendline, so it is not worth getting bent around the axle from one year's worth of information.

Overall, the MWC had a down year for recruiting, and since I have yet to create a longitudinal chart of all G5 conferences, I cannot say if the MWC is relatively trending up or down. Just know that if Idaho were on any of these charts, they would be dead last in every metric, so that should bring a bit of a smile to your face.