One month, folks. Just one.

We've got just 30 days until kickoff (that's a month), so today I'll take a look at the player that wears the #30 jersey on the Bronco roster—Jonathan Moxey

Moxey was a somewhat lightly-recruited prospect out of Dwyer High School. Dwyer plays in Florida's second largest classification (7A). The other all-league, all-whatever recruits from the area are going to the who's who of college football powerhouses: Ohio State, Florida, Florida State, Tennessee, Notre Dame, etc. So, how did Moxey fall into the Broncos' lap late into the recruiting process? Honestly, I'm not quite sure. You would think that a player who was a main cog on defense that allowed fewer than seven points and 100 passing yards per game would generate plenty of recruiting interest. In addition to those stats, Moxey put up a ridiculous nine interceptions and 13 pass break-ups as a junior. Despite those superlatives, Moxey only had offers from the likes of Bowling Green, Delaware, Georgia State, Middle Tennessee, Tulane, and Western Kentucky. After Moxey inked with Boise State, however, recruiting interest picked up a bit, as is the norm. 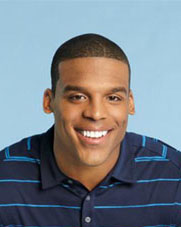 The man who robbed Kellen Moore of his rightful Heisman.

Appeared in all 14 Bronco games in 2014, tying for second on the team in pass breakups. Appeared in all but one of the Broncos games in 2013, including one start against Southern Miss. Earned all-state honorable mention honors (7A) following his senior season and third-team all-state as a junior. Selected to play in Georgia-Florida All-Star game in 2013 and hauled in an interception in the contest.

Last year I deemed Moxey "Boise's next great cover corner" and while I might be slightly less confident in that prediction than I was a year ago, I still think Moxey is one of the underrated defenders on the Bronco squad. Sure, he hasn't put up the INT numbers of his cross-field counterpart Donte Deayon...but Deayon is a rare breed of ballhawk and Moxey is coming along nicely. Given that Boise State had two All-MWC defenders in the secondary last season and Moxey still finished second on the team in pass break-ups definitely says something about him being in the right place at the right time, and those stats are bound to turn into INTs with a little coaching. Moxey's 33 tackles a year ago were also respectable...moreso because all but 7 were solo stops. If you can break up passes and make open field tackles, the interception numbers—while flashy—are secondary to your success (pun not intended, but welcomed). I have little doubt that Moxey will continue to progress as a defender this season and start converting more passes into turnovers, with any luck, they'll all be as pretty as this key 4th quarter pick he made against UConn.

Success isnt owned, its leased. And rent is due everyday..

After graduation, if the NFL doesn't come calling—Moxey has already been offered a job as foreman at Zavior Hoxie's epoxy factory in Biloxi, MS.