Share All sharing options for: 5 Thoughts on Boise State versus Colorado State

1. We're going to run Jay Ajayi into the ground. They say running backs only get a certain number of touches in their lifetime before they become old, decrepit Emmitt Smiths playing for the Arizona Cardinals. Ajayi is nowhere near his cap, but it sure seems like Boise State is doing its best to get him there. Thankfully, he's magnificent with the ball in his hands. His balance is ballet-esque, and his football IQ - knowing when to steamroll for extra yards and when to dance for extras - is a joy for football IQ nerds like me. If the NFL isn't in Ajayi's future, it won't be because he lacks the skill. It'll be because he had 3,500 touches this season.

2. Let's talk about Grant Hedrick's head. He took a big hit. People thought maybe he should have been more dazed and confused than he was. The phrase "concussion protocol" was thrown around liberally. Hedrick played lights out after the hit (minus a token interception or two). You are now up to speed on concussion(?)gate. 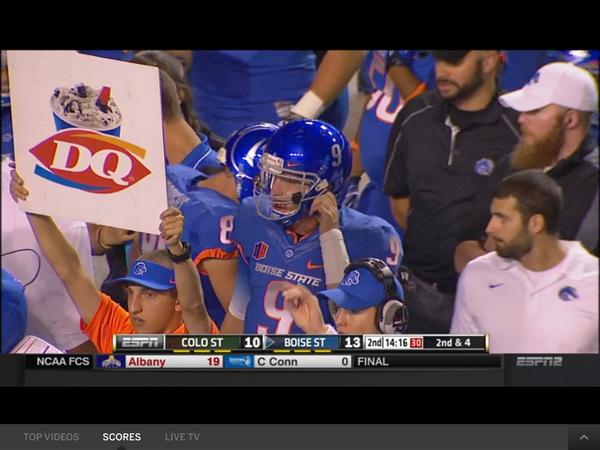 4. Like old times. I heard someone say this game was to decide the Mountain West Mountain division, which is rather silly since it's week two and rather silly because this one was kind of a laugher.

5. Give Marcel Yates all the money. He's earned it. Wow, that defense looks good.

Take it away in the comments.