Share All sharing options for: Game balls for Boise State vs Air Force

Man, this was a hard week to do this. At halftime of Boise State's game against Air Force on Saturday, I probably would have been hard-pressed to hand out a single game ball...and the only front-runner at that point was in a walking boot on the sideline in the second half...it was just that kind of game. Regardless, there were some guys whose individual efforts managed to shine through the ugly and yes, uncharacteristic loss. Let's dive in.

No two ways about it, Boise State's defensive secondary was absolutely decimated by injuries last week. Fully four of Boise State's five week one starters were out of the lineup in the secondary against Air Force, so redshirt frosh Chanceller James and true frosh Dylan Sumner-Gardner were forced into large roles. Both performed admirably, but James was a man possessed—racking up 13 tackles, 1 TFL and a fumble recovery and finally earning his promotion to actual Chancellor. 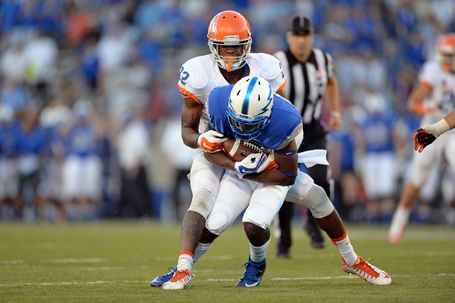 I'm not the knee-jerkiest of guys. I don't call for the backup QB at the first sign of struggle, but on Saturday night...it was clear the Broncos had no hope if they didn't make a change. Hedrick was rattled, and I'd seen the same listlessness in Athens in 2005. Enter Ryan Finley, who my gut says won't start this weekend, but is now a viable option. Finley wasn't perfect in his Bronco debut, but he made smart decisions with the football (even when throwing the ball away or taking a sack) and sparked the Bronco offense to attempt a late charge. In roughly a quarter of play, Finley threw 2 TDs and dropped 161 yards on the Falcons. Sure, his 48% completion percentage wasn't aligned with team standards, but he was forced to attempt "low percentage" passes because of penalties and the unfortunate position the Broncos were in. For keeping calm and carrying on, Finley gets a game ball.

Noticing a pattern here? All of this weeks game balls are going to guys that filled in admirably for injured comrades (physical injury or injured psyche). Sperbeck had to step into possibly the biggest shoes of all, in relief of injured Matt Miller. Yes, Matt Miller got injured...this game had it all! Sperbeck had 6 catches for 79 yards and probably should have had a TD but for the fact that the universe was not on our side on Saturday evening. Maybe Sperbeck's greatest grab was this "which shoulder did you throw to?" snag late in the 4th. Keep it coming, Thomas...and get well soon Matt Miller. /sob

Should I have given the cosmos a game ball for playing a near-perfect game against the Broncos?