We're out of the 20s but into the teens? Benjamin Button treatment.

We've got just 19 days until kickoff, so today I'll highlight the player that USED to wear 19, but pulled a switcheroo on us (now #9)—Mercy Maston

You may not realize it, but Maston is actually one of the higher profile recruits the Broncos have landed of late. He was somewhat off the radar for two years at Bakersfield CC (Tyrone Crawford's old JC stomping grounds), but the Broncos would've loved to have landed him directly out of high school when we were competing with the likes of UCLA, ASU, WSU, Fresno State, and Colorado State for his services. Maston ended up choosing San Jose State following his prep career—a school where his uncle Louis Wright had once excelled before becoming an NFL all-pro. Alas, the Spartan story, never really began for Maston and he became a bit of a recruiting free agent after 2 seasons at Bakersfield. His last season at Bakersfield, he helped lead the squad to a CCCAA Championship and posted 68 tackles, 2 INTs and 2 fumble recoveries. The second go-round, the Broncos beat out Nevada, UW, and Arizona for his services.

Appeared in all 13 games for the Broncos in 2013, with four starts. CCCAA Championship in 2012. Led team with 10 tackles in championship game. Led Bakersfield HS to CIF Championship appearance in 2010.

Quick, which (now) senior corner had the most tackles in 2013: Bryan Douglas, Cleshawn Page, or Mercy Maston? If you said "Maston" you look very foolish right now...not because you were wrong, but because you're talking out loud to your computer screen. Indeed, sir Maston led the senior pack of CBs in tackles last season with 44 (Douglas had 35), which was a surprising stat to me, but may give a little more credence to the notion that the second CB slot (the one opposite Donte Deayon) is indeed a four-horse race—the fourth horse being Jonathan Moxey, who started the Spring Game.

Now, popular opinion states that Moxey and Douglas are the key combatants in the cornerback royal rumble, but I definitely think there is a compelling case for Maston. He didn't have the INTs of Douglas a year ago, but had several pass breakups to go along with his superior tackling numbers and easily looks like the more physical corner in a theoretical Douglas/Maston face off. Of course, that leaves out Moxey, who as mentioned before, was the leader at the end of Spring and for a few fleeting moments last season, looked like the best corner on the field. Page, one of the faster players on the squad and a physical specimen will contribute, but I think the first 3 guys are the ones to really watch. All four will certainly play—obviously, the runners up at the end of camp will fall into place as backups on the right and left boundaries and will be available in dime packages and as a "second wave" of fresh legs that Marcel Yates is sure to want.

The competition being so stiff during Fall Camp is sure to help the eventual starter (or starters) down the road this year and Maston could well be one of those starters. My gut says Douglas or Moxey will get the honors, but I could certainly be wrong...and having Maston's sure tackling in the secondary will be a real boon to the Broncos whether he's in the first wave or the second.

Mastin' is the newest fad to hit the internet. It's similar to planking, but you just take a picture of yourself standing straight up. 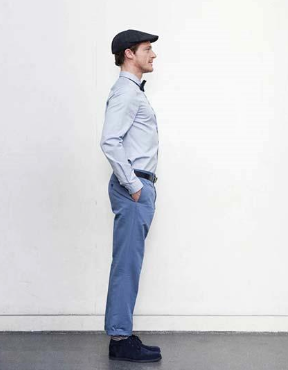